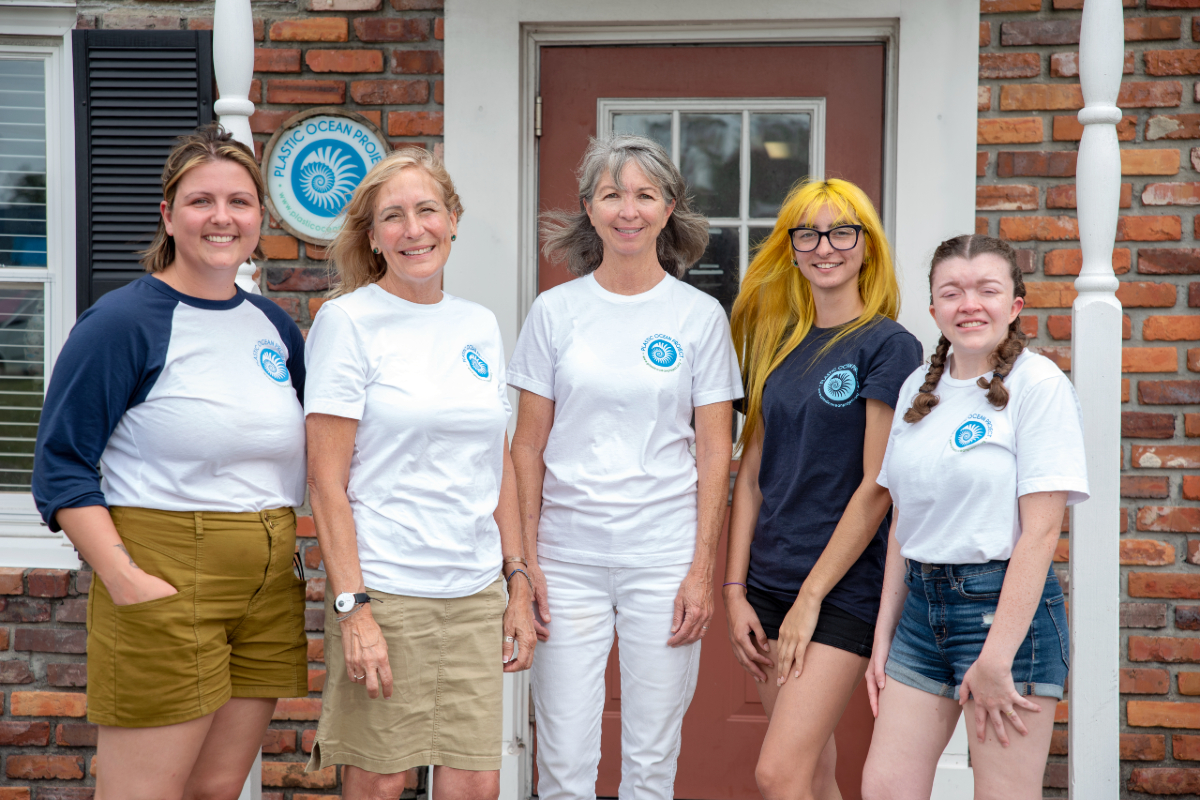 Like the bodies of water it strives to protect, Plastic Ocean Project’s work is broad, deep, and complex. But thanks to the commitment of its Wilmington-based five-woman staff, the nonprofit’s multifaceted efforts have a global impact and a network with other organizations with similar missions.

On the surface, that mission is a simple one: to rid the world’s oceans and other bodies of water of plastics. But addressing the problem requires a flotilla of approaches within the organization’s three pillars: Education through research, outreach through art (visual and film), and solutions through collaboration.

First, it’s about educating individuals and companies about what plastics are doing to our world, says director BONNIE MONTELEONE, who co-founded the organization in 2012 with PAUL LORENZO. Lorenzo remains the organization’s treasurer and board member. “It’s all about reducing our use of plastic. Recycling is good but isn’t the answer because we don’t really know how to recycle plastic.”

“Our research shows that terrestrial animals, such as grizzlies and black bears, are getting entangled in plastic,” she says. “The ocean has gotten so much hype; we’re not looking at animals in neighborhoods. We’re hoping to hit people in their hearts to change- to connect with people and how they feel about things.”

KAYLA WEST, laboratory director, oversees as many as fifteen research projects at the organization’s lab and elsewhere.

“Our current research projects focus on quantifying and identifying microplastics within freshwater and marine surface samples,” West says. “We are also determining the ingestion of these contaminants in mammals such as bottlenose dolphins, grizzly bears, black bears, and river otters. So far, we have found microplastics in all of our analyzed samples.”

“Artists are just as important as scientists,” Monteleone says.

One important current project is the documentary If The Ocean Could Talk: A voice for the North Atlantic Right Whale and Friends. The project was envisioned as a film “delicately balancing the beautiful sounds and scenes of the marine world contrasted against its destruction caused by human impacts,” POP’s website states. Monteleone worked with composer and musician GARTH STEVENSON to explore the North Atlantic and to record the myriad sounds of marine life in the ocean off North Carolina.

What Monteleone and her team didn’t anticipate was the death of a newborn North American right whale – a critically endangered species. Interviewing scientists to identify possible environmental reasons for the calf’s death became the central thread of the documentary. While the film is still in production with an expected release date of Earth Day 2023, the trailer is complete.

“The trailer has already been accepted into three film festivals,” says LISA ANDREE, who handles communication, membership, and fundraising. “Bonnie and her team put so much work into that already. We held our first fundraiser at the Fort Fisher Aquarium last April.

“The North Atlantic is in jeopardy, especially the North American right whale. In November 2020, when we began this film project, there were 356 of them. We have now lost 30 of these whales,” Andree adds.

Other art projects aim to convey the urgency of taking action on plastics: one, funded with a grant from Project Aware, is titled “What Goes Around, Comes Around.” This traveling exhibition uses plastics collected from three oceans, assembled into a giant three-dimensional wave, resembling the image by nineteenth-century Japanese artist Katsushika Hokusai, “The Great Wave of Kanagawa.” The goal of this work is to highlight the dangers to the environment of one-use plastics and to stimulate discussion of what can be done about the problem.

The third pillar is about finding – and implementing – solutions. To identify solutions, the nonprofit has thrown its net wide and helped create a collaborative web. While its support comes mostly from sources in the United States, its reach is much broader, according to Monteleone.

“Most recently we’re working with a group in Sierra Leone and one in Haiti,” she says. “We’ve worked with people in the Bahamas and with other nonprofit organizations with similar missions around the world. We are now global; we’ve logged over 10,000 nautical miles, studying plastics in some of the most remote places in the world.”

“One of the things that makes Plastic Ocean Project unique is its ability to bring people from different backgrounds and places together. My husband is a filmmaker; I am involved in research and education. We are really pulling in all sorts of people to apply their skills, and it’s going to take a diverse group to address the issues.”

The organization has inspired several young people to start their own projects that contribute to its goals, and it continues to draw a diverse group of volunteers and collaborating organizations near and far.

As its reach has grown, so has its budget. The organization launched ten years ago with $300 in the bank and no financial backing and has grown its annual budget to about $120,000. Plastic Ocean Project has already hit that level this year and anticipates 2022 support will total about $165,000, Monteleone says.

Support comes from individuals, from grants, and from the business community. One corporate backer is nCino, which supports the Trees4Trash program, enabling the planting of a tree for every twenty-five pounds of trash it collects. The organization has also promoted the Ocean-Friendly Establishments initiative, garnering commitment from restaurants and bars that they will serve straws only upon request. The network has grown to more than 250 establishments, mainly in North Carolina, Georgia, Maryland, New Jersey, New York, and Oregon.

Details of these and many other programs, and how to become involved, are available on the organization’s website, plasticoceanproject.org.

Even without volunteering for Plastic Ocean Project activities or supporting the organization financially, everyone can help reduce the use of plastics, says EMILY MULVIHILL, POP’s assistant director.

“When we have tabling events we provide solutions to the public, using bamboo utensils, metal straws, reusable cuts, and bottles,” she says. “We also educate the public on supporting Ocean-Friendly Establishments in Wilmington. And the public can participate in local cleanups.”