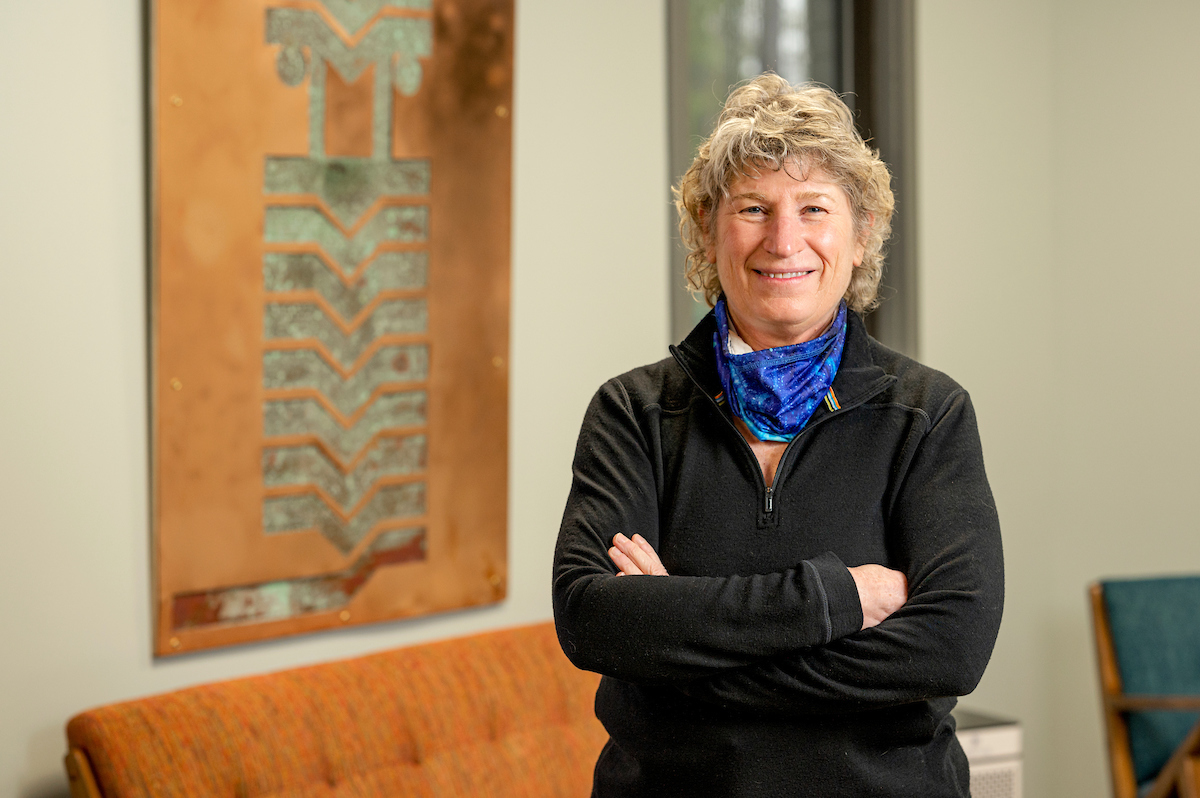 BETSY KAHN and her dad shared a few things aside from DNA: an initial lack of training for the professions in which they found themselves and the tenacity to improve upon their professional shortcomings and make their business thrive during difficult times.

Neither MAX KAHN’s degree in ceramic engineering nor his daughter’s degree in recreation were particularly handy in preparing them both to run Copycat Print Shop in Wilmington, which Max Kahn did in the early 70s while Betsy Kahn assumed the business’s presidential reins in January 2004. Her father became inactive in the business in 2010 and passed away in December 2017.

Copycat is a commercial print shop that provides banners, signs, marketing collateral, forms, graphic design, and data management/digitization, all vital to businesses. They also offer grand format, or very large, printing services, including custom wallpaper. They do a lot of work with the architectural, engineering, and construction industries, which is how the company began.

Copycat was started in 1970 by Wilmington-based architects Ballard, McKim and Sawyer as a way to control the printing of their blueprints and specifications; there weren’t any local copy shops to do this.

In 1972, the architects hired Max Kahn to run the shop, making him one of the four owners. He grew the business and then bought out the other owners in 1979 and incorporated the Copycat Print Shop, the only blueprinter in southeastern North Carolina.

In 1981, Betsy joined the Copycat team. Her job was to sell drafting supplies to local architects, engineers, and general contractors.

“Selling drafting supplies sounded wonderful,” she recalls, adding, “except I didn’t know what drafting supplies were.” In addition, she had no formal selling skills. But like her father before her, she was determined to learn all she could.

She read vendor product catalogs and familiarized herself with products and people in the industry.

“I might as well have had a blindfold,” she says of the early years.

She soon began attending association conferences, learning how to network, determining who the major vendor movers were and what companies similar to Copycat were located in the region.

She also had the home-court advantage, since her family had deep Wilmington roots.

Aside from the technical skills her new job required of her, Betsy Kahn knew she lacked business know-how.

“You could have shown me your balance sheet back in 1981 and I wouldn’t have known what it was.”

By the early 1990s, Betsy Kahn became increasingly involved in regional industry associations and began networking with other business owners. The “industry titans” with whom she networked taught her what was possible.

She attended the annual conferences of the Southeastern Regional Reprographics Association, a satellite of the International Reprographics Association (IRGA), and later sat on the board for six years. She was named president for the Southeastern U.S. group in 1998. The group is comprised of entrepreneurial businesses, serving the large- and wide-format reproduction needs of various industries, including architectural and engineering.

She implemented several things she learned at the conference and the efficiencies they earned her compensated for the cost of attendance. Later, she was voted on to the IRGA board, one of less than a handful of women to ever to in the then male-driven industry.

About two-and-a-half years ago Betsy Kahn says she had an “aha” moment, realizing she had no idea how to work “on” the business. She hired Wilmington business coach Reggie Shropshire of Action Coach, a business coaching franchise.

He helped her move from a practice of allowing “nice people” to work for her to making sure they were the right fit for the job and the company. He helped her get her finances in order, which improved profitability.

Like her dad, Betsy Kahn believes in ensuring employees make a decent living wage. She also invests resources in employees’ professional development. Clear communications and good teamwork are essential to her success.

She’s learned that some things, like tenacity and overcoming adversity, aren’t in any college curriculum. They’re learned skills, often acquired out of necessity.

She points to two of her proudest and most enduring moments. One was managing to keep her doors open during the recession when the company experienced a loss of revenue of about 55%.

She was tested more personally — and perhaps more profoundly — in 2019 when, in the midst of construction oversite for an extensive renovation to their new Kerr Avenue location, her wife and life partner of 16 years, JULIE STONE, became ill. She was hospitalized and passed away in about two weeks.

“It’s an absolute miracle that I’ve been able to rebound and continue to lead Copycat,” she says. “I have a completely new perspective on what’s important and what is not, in business and in life.”