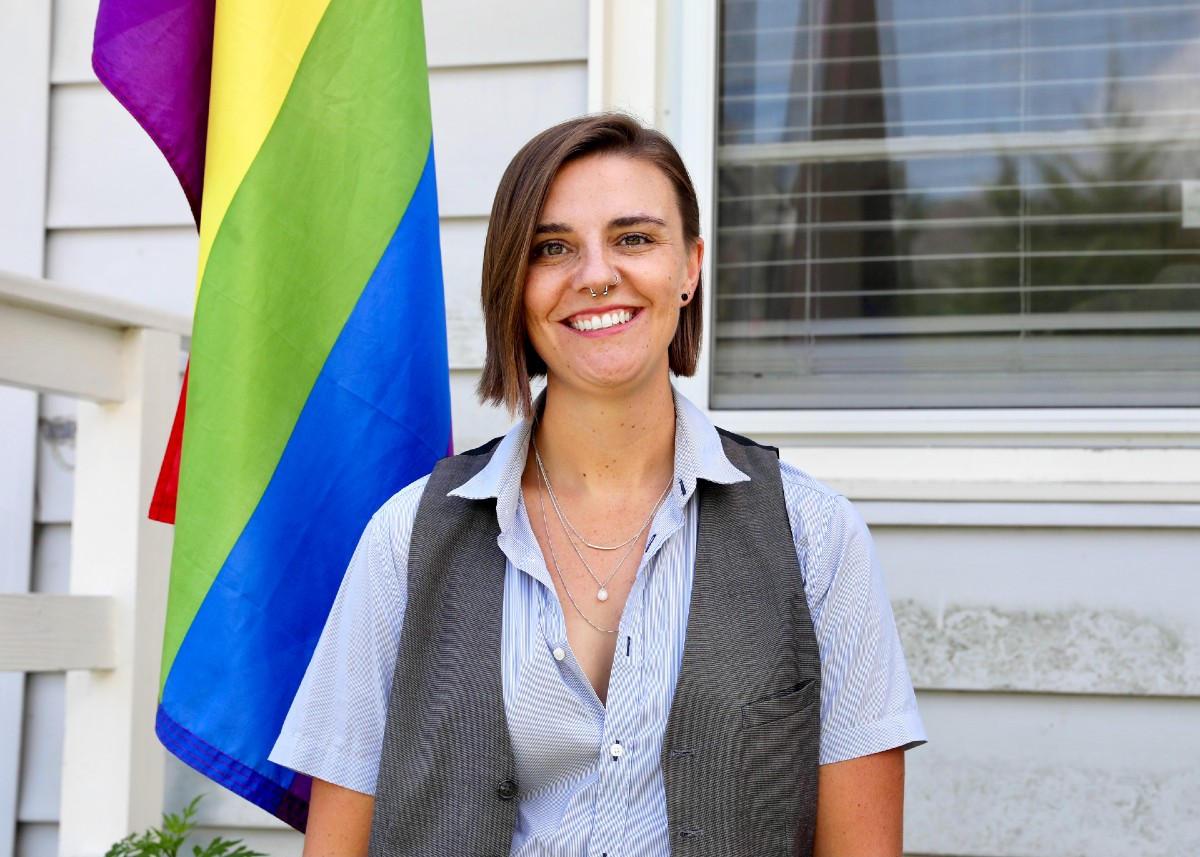 When CAROLINE MORIN-GAGE accepted the position of executive director of the LGBTQ Center of the Cape Fear Coast, formerly known as the Frank Harr Foundation, she knew she had found her perfect job. The position connects Morin-Gage’s professional experience, satisfies her desire to serve the public, and fulfills her personal goals.

“This was an opportunity to combine my love of social justice and helping people advocate for themselves,” she says. “Also, I’m queer. If I want to live in a place that is safe, welcoming, and affirming, I should work for that every day. I now have the privilege of doing that.”

Morin-Gage grew up knowing she wanted to serve the public. Her first step to achieving that objective was to earn her law degree from New England Law Boston. She relocated to Wilmington and obtained a position helping people who were uninsured with medical expenses. Morin-Gage next became a community organizer for the ACLU of North Carolina and then the vice president of Learning and Development at TRU Colors. She took over the helm of the LGBTQ Center this June.

Morin-Gage is proud of the many resources the center offers to the area’s LGBTQ population, which numbers around 10,000, she says. One of its most important services is helping LGBTQ individuals deal with the fear, stigma, and isolation that many experience in our area. Therefore, the center’s core programming includes support groups for youth and the elderly, two groups that are particularly vulnerable, according to Morin-Gage.

In addition, the center hosts programs such as Safe Zone training, which helps schools, businesses, nonprofits, and other organizations create a welcoming environment for the LGBTQ+ community; the Wilmington Pride Youth Group, providing educational forums, games, art projects, and other activities that promote socialization; and AIDS Awareness, including the AIDS Memorial Quilt and year-round testing. It also educates social work and nursing students on the issues the LGBTQ population faces.

Morin-Gage hopes to expand the Center’s current offerings in the future. One goal is to support those who have intersecting identities, such as those who are LGBTQ and BIPOC (Black, Indigenous, and people of color). Another goal is to support LGBTQ individuals who have been discriminated against, which unfortunately is a not uncommon experience in the Wilmington area, she says.

Morin-Gage would also like to increase the center’s staff, both to provide needed services and to keep the organization open five days a week. It currently offers only drop-in hours. With these changes, Morin-Gage says the center will be able to help hundreds of people.

“There is a definite need in the community for the resources and support the center provides,” Morin-Gage explains. “This organization is a lighthouse, and I’m really trying to turn up the brightness and let folks know we are here.”

In the ten weeks since Morin-Gage became the center’s leader, she has experienced the negatives and positives of leadership. She has sifted through the hate mail, and she has given hope to LGBTQ individuals who are isolated and don’t know where to go.

“The Center is a lifeline for them,” she says. “I talk to LGBTQ individuals who are elderly and parents who don’t know how to help their LGBTQ child. Everything we do is serving someone’s health, safety, or dignity, and in many cases all three.”