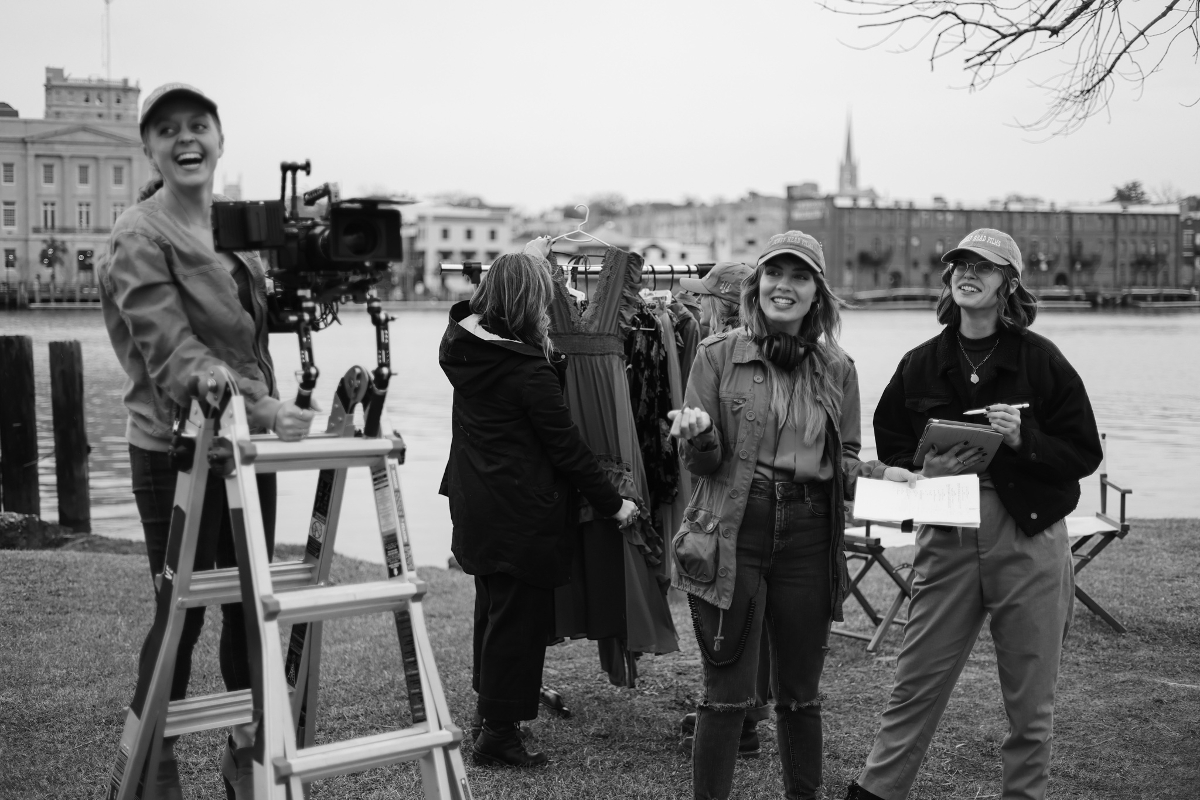 The number of women employed in major behind-the-scenes roles in the film industry is growing. But slowly. According to a study by San Diego State University, women represented just 32% of producers, 17% of directors and writers, and only 6% of cinematographers in the 250 highest-grossing films of 2021.

KRISTI RAY and ERIKA ARLEE are co-founders of Honey Head Films, an award-winning boutique film production housed in Wilmington producing narrative, documentary, and commercial films for the past five years. Former high school educator SAM MCLEOD joined Honey Head Films in 2021. The women are on a mission to level the playing field for underrepresented stories and marginalized filmmakers.

“If we can shift the perspective and fill the gap in access for the next generation of female creatives, then the slowly rising industry statistics can climb a little faster,” Ray says. “Women represent half the population. Shouldn’t that be reflected in the stories we tell?”

This summer, Honey Head Films is launching its inaugural day camp for high school girls interested in filmmaking, pursuing a career in the arts, storytelling, or who are looking for an empowering, all-female program.

WILMA talked to Ray and McLeod about Shoot Like a Girl film camp.

WILMA: Why offer this program?
Ray and McLeod: “Nearly twenty collegiate interns have come up through our company over the past several years, the majority of them young women. We’ve witnessed a shocking majority of young female filmmakers who are underprepared for a technical career in the industry. This camp is designed to give young girls a leg-up in a safe environment where they can explore their interest in film, hone their creativity, build soft skills, and increase confidence to make a change in this industry.”

WILMA: How did you come up with the idea for Shoot Like a Girl?
Ray: “In 2018, we founded the Honey Head Mentorship Program for middle school girls aspiring to make their voices heard through cinema. We saw enormous confidence spikes in the young women we mentored. When McLeod came on board, we began to seriously consider the possibility of a full-fledged summer camp, and Shoot Like A Girl film camp was born.”

WILMA: Who is the all-female professional crew who will run the camp?
Ray and McLeod: “Shoot Like A Girl film camp will be led by the experienced women at Honey Head Films. We have a combined twenty-five years in the film industry plus involvement in youth leadership, coaching, and education. The women who will be cinematographers, sound mixers and camera assistants are working professionals in Wilmington who have a passion for empowering the next generation of female storytellers. They are local creatives in the Honey Head ‘hive’ hand-selected by our team. We have partnered with each of them on various projects in the past and know they will be excellent role models.”

WILMA: Who should attend Shoot Like a Girl?
Ray and McLeod: “The high school girls who will benefit the most are students who are eager to learn new skills and exercise their creative eye in a safe, collaborative environment. There’s no need for applicants to have any prior experience in film.”

WILMA: What will be taught?
Ray and McLeod: “We’ve designed a curriculum that is accessible for first-time filmmakers, but also challenging for girls who have experience. Students will explore all aspects of filmmaking from writing, production design, sound, cinematography, acting, and directing.”

WILMA: What will each day be like?
Ray and McLeod: “Some days will be full of table reads and filming on location. Other days will be creative hands-on challenges, crash-course workshops, or panel discussions with guest speakers. Students will explore all realms of film production from reviewing the latest cut of their film with their editor and planning shots with their cinematographer to workshopping a mood board for their production design. While some lecture is needed to learn industry-standard vocabulary, we’re prioritizing discovery learning. Each day brings a really cool learning opportunity.”

WILMA: What is your hope for the girls who attend?
Ray and McLeod: “We’re all about finding your creative sister and building a tribe, so we hope that girls will find friendships that last after the program ends. After a challenging, fast-paced two weeks of writing, prepping, shooting, and editing, the sense of accomplishment of seeing your own work on the big screen can’t be beat!”

WILMA: And what gets you excited to host the camp?
Ray and McLeod: “We are excited to be on set with an amazing group of girls, watch them take charge as directors, and get bit by the film bug! It’s rewarding to see a student use what they’ve learned to feel confident and empowered.”

Shoot Like a Girl film camp will run from July 18 through August 2 from 10 a.m. to 5 p.m. at Honey Head. Girls will screen their final films on August 3.