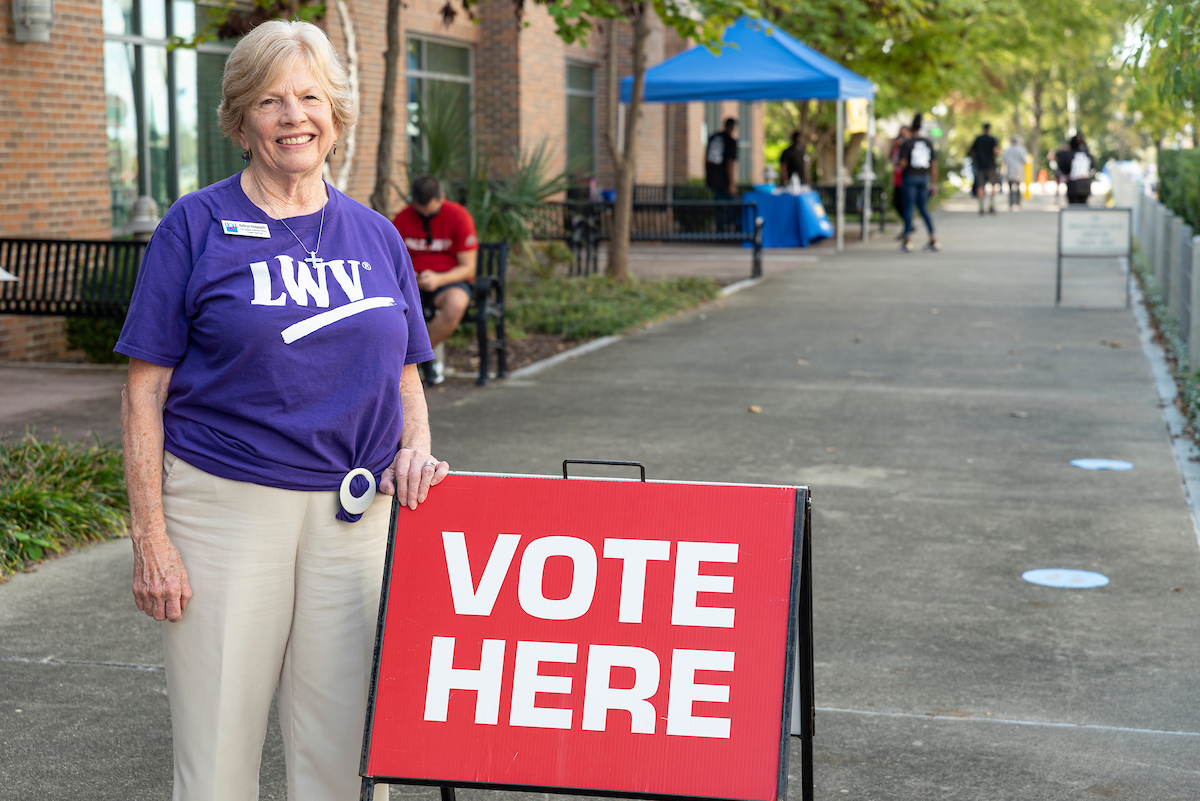 KATHRYN HEDGEPETH first became involved in the League of Women’s Voters in California in the 1970s when the slogan was “A Woman’s Place is in the House and in the Senate.”

“I was interested in how to get women more involved in decision making,” Hedgepeth says.

Busy with her own career at the time, Hedgepeth “fell away from activism,” while she worked in nonprofit fundraising.

When Hedgepeth retired and moved to the Cape Fear area, she renewed her interest in activism and the League of Women Voters of the Lower Cape Fear was an easy fit.

“They are activists, not just a passive group. It was an outgrowth of the suffragists who disbanded when the 19th Amendment was ratified in 1920, and the League of Women Voters emerged,” Hedgepeth explains.

The LWV-LCF has been active since the 1970s in the area, and Hedgepeth is proud to serve as board president.

“We are a group that looks at issues that are pertinent to voting and to make sure voting is equitable,” Hedgepeth says. “We were founded to make sure that everyone has the right to vote.”

Hedgepeth explains how the LWV-LCF focuses on areas that “impact how successful we are as a country.”

Action teams comprised of league members delve deep into issues in regard to education, the environment, fair elections, and women issues. The action teams focus primarily on local levels, although state and national issues are also taken into consideration if they have local impacts.

Due in part to the activism of the League, Hedgepeth is proud decisions against voter identification laws and gerrymandering have passed. Recently, the League of Women Voters of North Carolina acted in court to protect absentee ballots rejected due to mistakes, allowing voters to make corrections and have their vote counted.

“Activism appeals to me,” Hegdepeth says. Getting a more diverse group of members to take part in that activism is a new goal of the LWV-LCF.

A new Diversity, Equity and Inclusion Task Group has been created within the League which Hedgepeth hopes will “affect real change in the organization.”

Moving forward, Hedgepeth looks forward to bringing more Conversations with the Candidates videos to the public where the League invites local candidates to sit down and answer pressing questions for voters.

“The conversations are posted on our website and on YouTube, and it is a chance to give people the chance to hear about the candidates’ positions on important topics,” Hedgepeth says.

Hedgepeth is proud of the League’s education fund initiative, Vote 411, which enables citizens to register to vote, check registration status, and generate a sample ballot with nonpartisan candidate information; however, she is discouraged by the number of candidates who do not respond to the League’s invitations to participate.

“Forty percent of candidates do not respond, and it deprives voters with a real chance to hear what candidates feels about issues,” Hedgepeth says.

Unfortunately, COVID-19 impacted much of what Hedgepeth and LWV-LCF had planned for 2020.

“We did a quick switch and went virtual with a whole lot of stuff,” Hedgepeth says.

Hedgepeth hopes the move online will open up the League to many more people with the ability to attend meetings virtually.