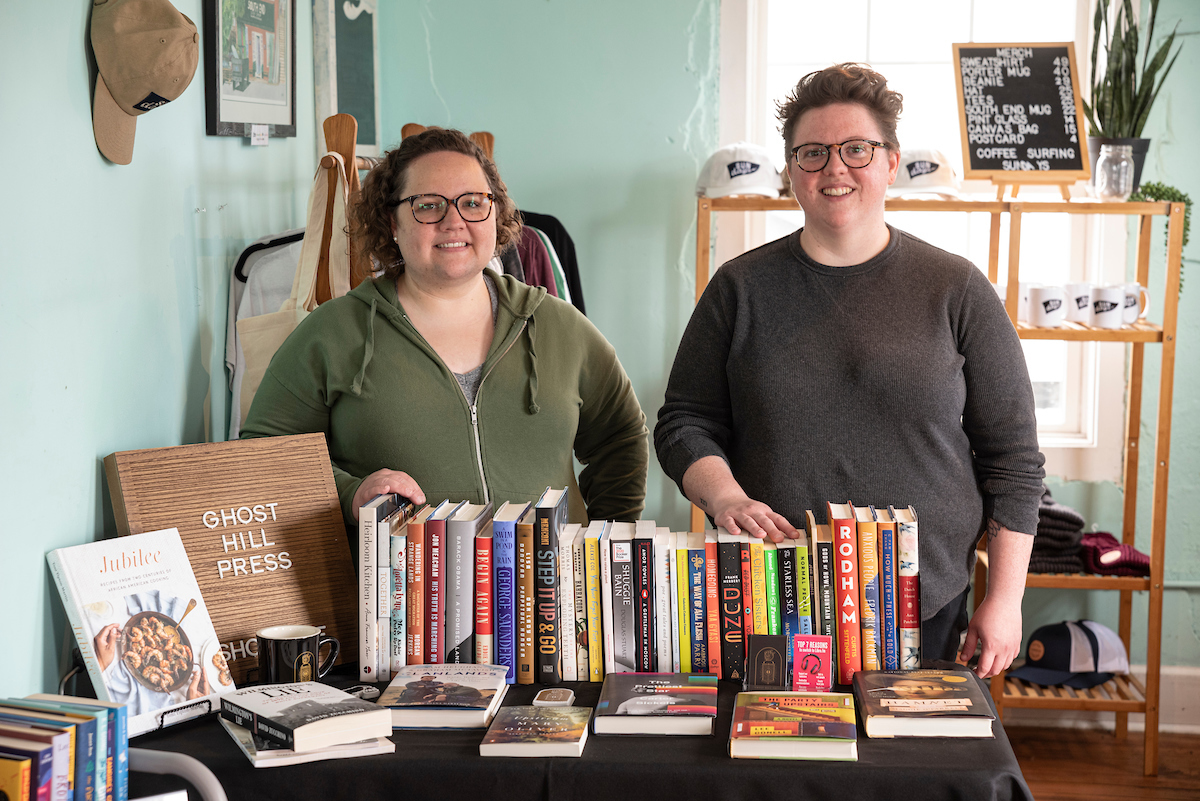 The Sherman sisters invite you to join them for adventure, romance, education, mystery, and more.

Bibliophiles PAM (pictured right) and KIMBERLY SHERMAN (left) are the owners of Ghost Hill Press, a fledgling online bookstore named after a spookily named area in northern New Hanover County near where they grew up.

The Shermans launched their online enterprise last October and hosted their first pop-up event, appropriately enough, on Halloween. But despite its moniker, their store boasts far more than ghost stories.

“There are some awesome independent bookstores across the U.S. but we were not familiar with them,” Kimberly Sherman says. “I lived in St. Andrews. There was a lovely little bookshop that opened up while I was there. The staff was so great about having a hands-on approach; they would bring out tea and coffee to customers.

It was a cozy setting; you didn’t want to leave. And they always had a unique selection that went beyond just popular books.”

Pam Sherman visited a few independent bookstores in Edinburgh and notes that one of them won the British Book Awards Independent Bookshop of the Year – at both the regional and the national levels – in 2019. She was impressed by the way the shop displayed its inventory.

“Their books were displayed front-facing, which is more visually appealing than the standard spines-out approach,” she says.

Pam Sherman also learned an important lesson from the bookshop’s success after it had struggled just a few years earlier: its owners stage events to connect with the community. The store had gone from teetering on the edge of solvency to becoming what one book industry official called “the lynchpin of the local community.”

In bringing Ghost Hill Press to life, the two booklovers are employing some of the same strategies that are successful in Scottish shops. Soon, their wares will move off their virtual bookshelves and into a physical space in Wilmington’s Cargo District. The Shermans are hoping to open Ghost Hill’s doors by late April.

The cluster of renovated shipping containers has already attracted several niche businesses with its distinctive ambiance and, Pam Sherman says, its affordable rents.

“We initially thought we wanted to be in a more standard size store of about 1,000 square feet,” she says. “Instead, we’ll have 160 square feet, which is good for what we have. We will have to have less filler.”

Kimberly Sherman is ready to think big in a small space.

“We don’t have to carry everything to be good,” she says, pointing to the power of connections in a specialty shop: the staff’s ability to connect customers with books they might enjoy; a store’s hosting of events to connect readers with each other and with authors. In these days of Zoom and Skype, authors everywhere are more accessible for book talks.

“Our ultimate goal is to create a reading community around the bookshop,” Pam Sherman says.

“A huge part of our approach to selling books is working with readers or people who think they are not readers and getting them introduced to books that could make them readers,” she says. “It’s all about accessibility: (a book) can bring so much joy to everyday life. It’s something to turn to after a long day, and it can be an escape or a way to learn something.”

Pam Sherman says people should not be ashamed of what they like to read.

“It’s okay if it’s not Charles Dickens; we’re not like that.”

Asked how they choose the books for their store, Pam Sherman says some selections are based on what she and her sister have read or have had recommended by friends they trust.

Kimberly Sherman adds that the two keep their ears to the ground for the buzz on social media, and keep their eyes on what’s popular, including some classics.

“It’s a hodgepodge,” she says. “There are books we are familiar with in the U.K. and are just now coming to the U.S. We pick things we think would be really cool to read.”

And if Ghost Hill Press doesn’t stock a book a customer wants, the Shermans are happy to order it. Those orders usually can be fulfilled quickly – often just about as quickly as you’d get a book through Amazon or Barnes & Noble, according to Pam Sherman.

The sisters have been very pleased with Ghost Hill’s pop-up events, held at breweries, bottle shops, cafés, and other gathering spots.

“Our (pop-up) customers depend on where the pop-ups have been,” says Kimberly Sherman. “We’ve seen a lot of different people, different age groups, being interested. That’s been awesome, to meet people from widespread demographics. We’ve seen children’s books flying off the shelves. The same is true of some of our online orders.”

The latest addition to Ghost Hill Press’s offerings is its Luminary Book Club, a monthly book club subscription service. Each month, subscribers will receive a book chosen by Pam and Kimberly and will have the opportunity to discuss it in a virtual book club meeting.

What has been a recent favorite read for each of the Shermans?

For Pam, it’s “Midnight Library” by Matt Haig. “A depressed woman is transported to the Midnight Library and reads different versions of her life presented as books on a shelf,” she explains. “It made me reflect on life, and think about living intentionally and getting past points in your life when you think things can’t get any better. I recommend it quite often.”

Kimberly’s favorite was “The Office of Historical Corrections, a collection of short stories and a novella” by Danielle Evans. “The stories are very challenging, making you think about your own assumptions about race and class,” she says. “The protagonists are often women. The novella is about how we tell stories about the past, and what are the ethical implications.”

ON THE GHOST HILL CALENDAR

Coming off a busy March, which saw Ghost Hill Press host seven events, Pam and Kimberly Sherman have two events already on the books for April. Coming up: