Bands on the Run

Innovative ways tunes are getting out 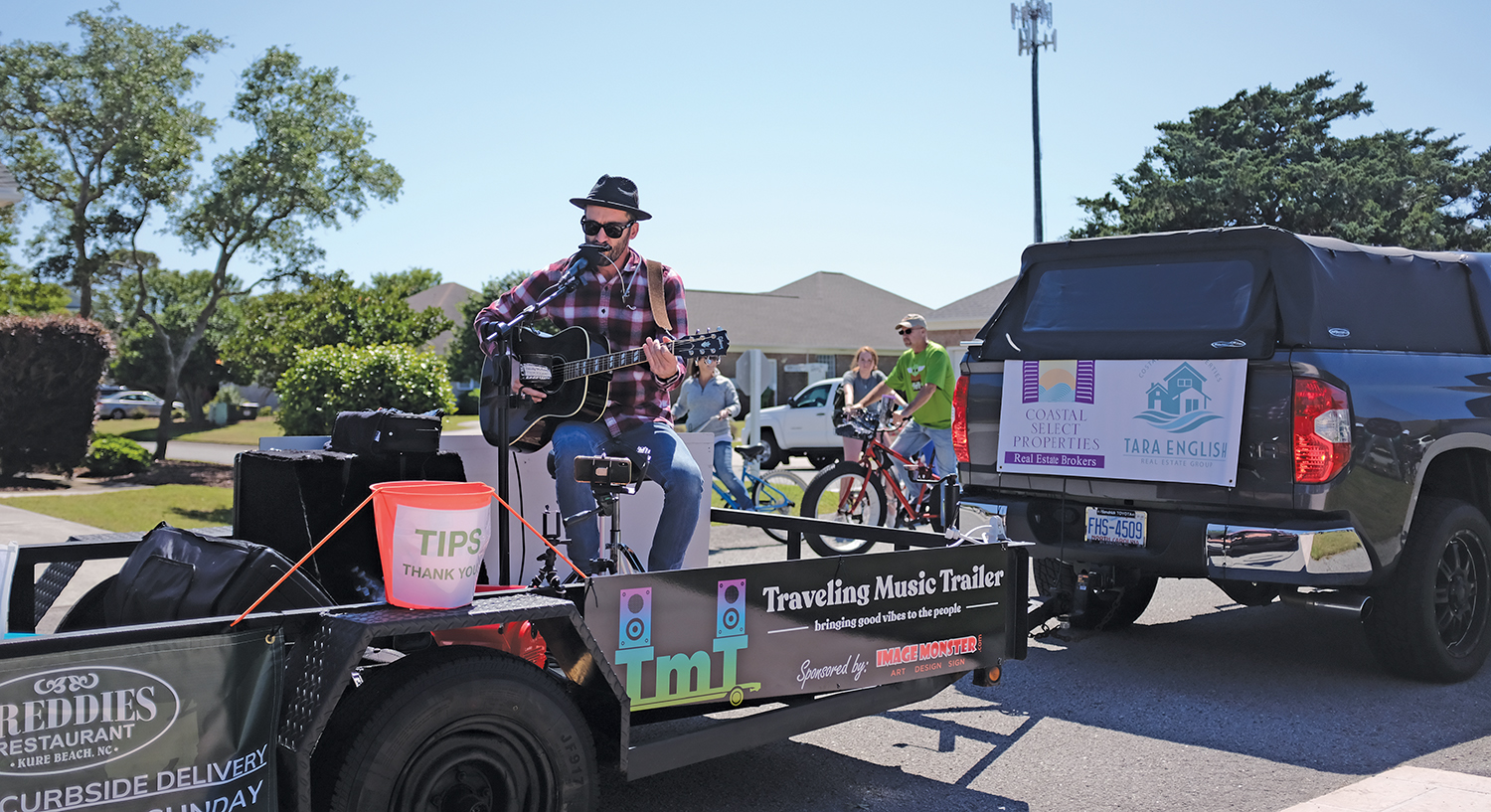 Wilmington is used to having a vibrant music scene, and nothing, including COVID-19, can stop it. Some of the Port City’s music lovers have found creative ways to allow musicians to entertain audiences and audiences to enjoy their talent while typical concert venues are closed.

While some spontaneous, one-night, pop-up concerts have occurred through­out the area, JOHN HINNANT, a com­mercial real estate broker and real estate appraiser, is taking the idea to a whole new level. His Under the Magnolias concert series is ongoing. Drive past his home on a Saturday evening, and you’ll see twenty-five or so of his neighbors sprawled across his yard or relaxing on their porches while jamming to a sixty-to ninety-minute concert.

“This is an opportunity to do some­thing to promote community pride,” Hinnant says. “I’m glad I can provide a little joy for my neighbors and the mu­sicians.”

For the concerts, Hinnant calls on area musicians he met while working for Wilmington Downtown Inc., in 2007. Many of the musicians haven’t performed since the stay-at-home orders were put in place and welcome the opportunity to play before a live audience. Hinnant is glad he can give them that chance. 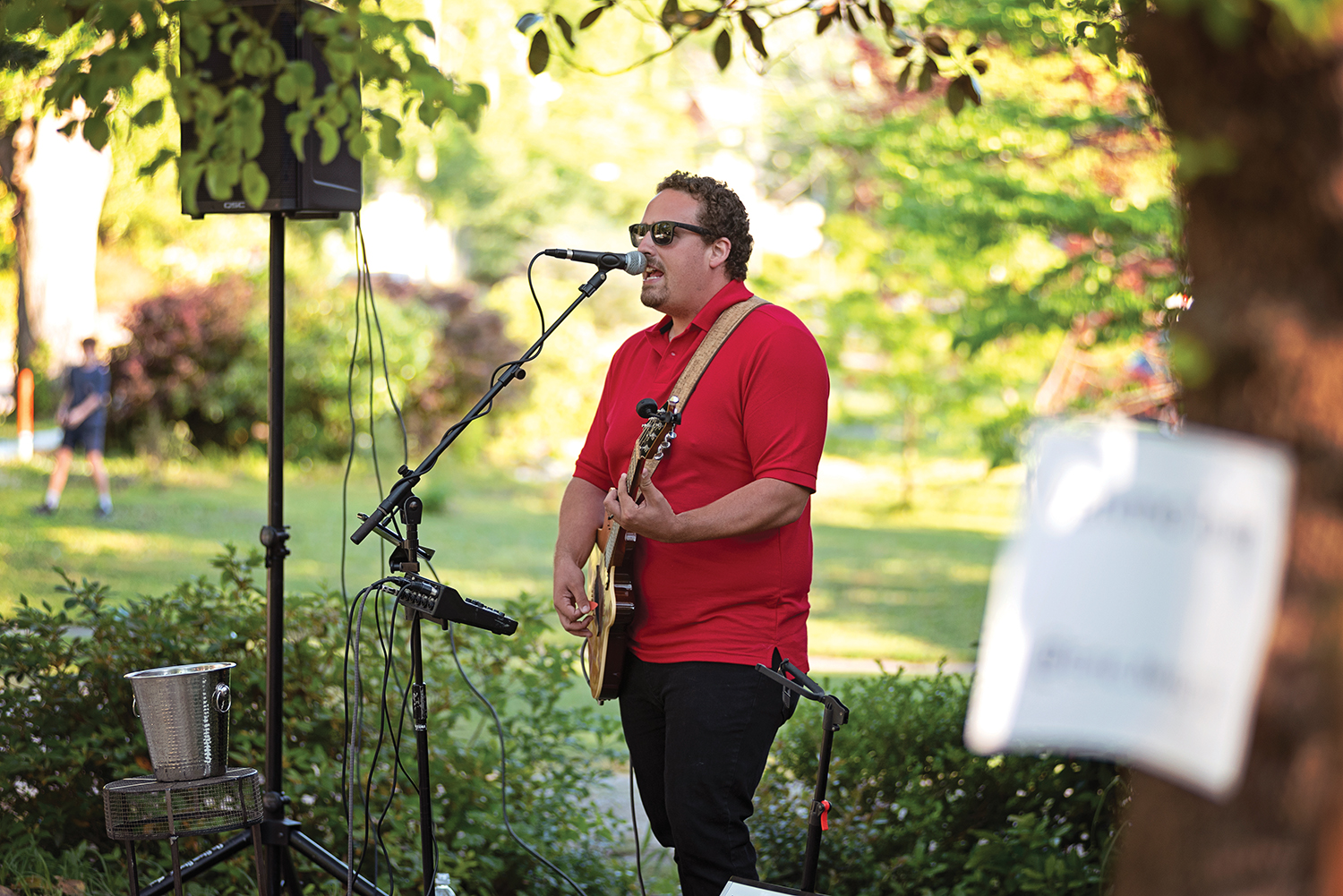 05/02/2020 – Under the Magnolias concert series, Musician Eric Metts performs in the driveway of John Hinnant. (Photo by Michael Cline Spencer)

“Musicians have a God-given talent that’s meant to be shared,” he says. “You can watch concerts at home, but it’s not the same.”

Hinnant pays the musicians a bit of seed money, he says, but the concerts are free to his neighbors. However, many give the musicians cash or tip them through their social media accounts.

While Hinnant hopes musicians will soon be able to resume performing in their usual venues, he’s happy to pro­vide the Under the Magnolia series in the meantime. 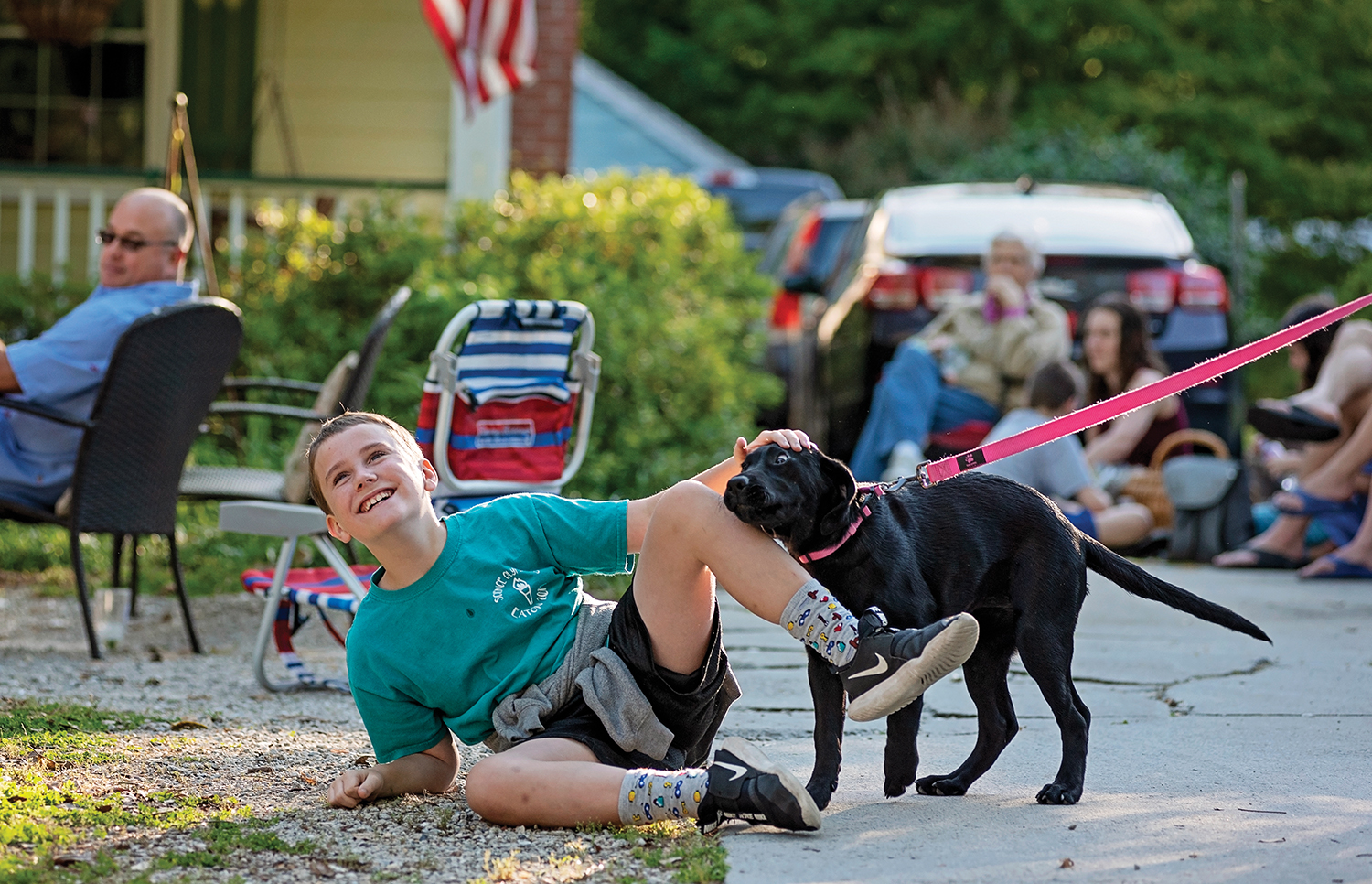 05/02/2020 – Under the Magnolias concert series, Paul Gamble, 11, plays with a neighbor dog in the driveway of John Hinnant home while listening to musician Eric Metts perform. (Photo by Michael Cline Spencer)

JUD WATKINS, owner of Wrights­ville Beach Brewery, is another Wilming­tonian who is hosting innovative musical concerts.

For the past couple of months, he’s had musicians playing at a drive-th­ru farmers market held on Saturdays at the brewery’s parking lot. Once the state moved into its first phase of reopening businesses on May 8, Watkins started adding Drive Up Concerts to the mix. On Thursdays, families can order a pizza and pick it up at the restaurant’s drive-thru area, park in a socially distant space (only every other parking spot is open for use), and enjoy some music while they eat. As with the farmers market, part of the money the brewery earns will be donated to a local nonprofit. 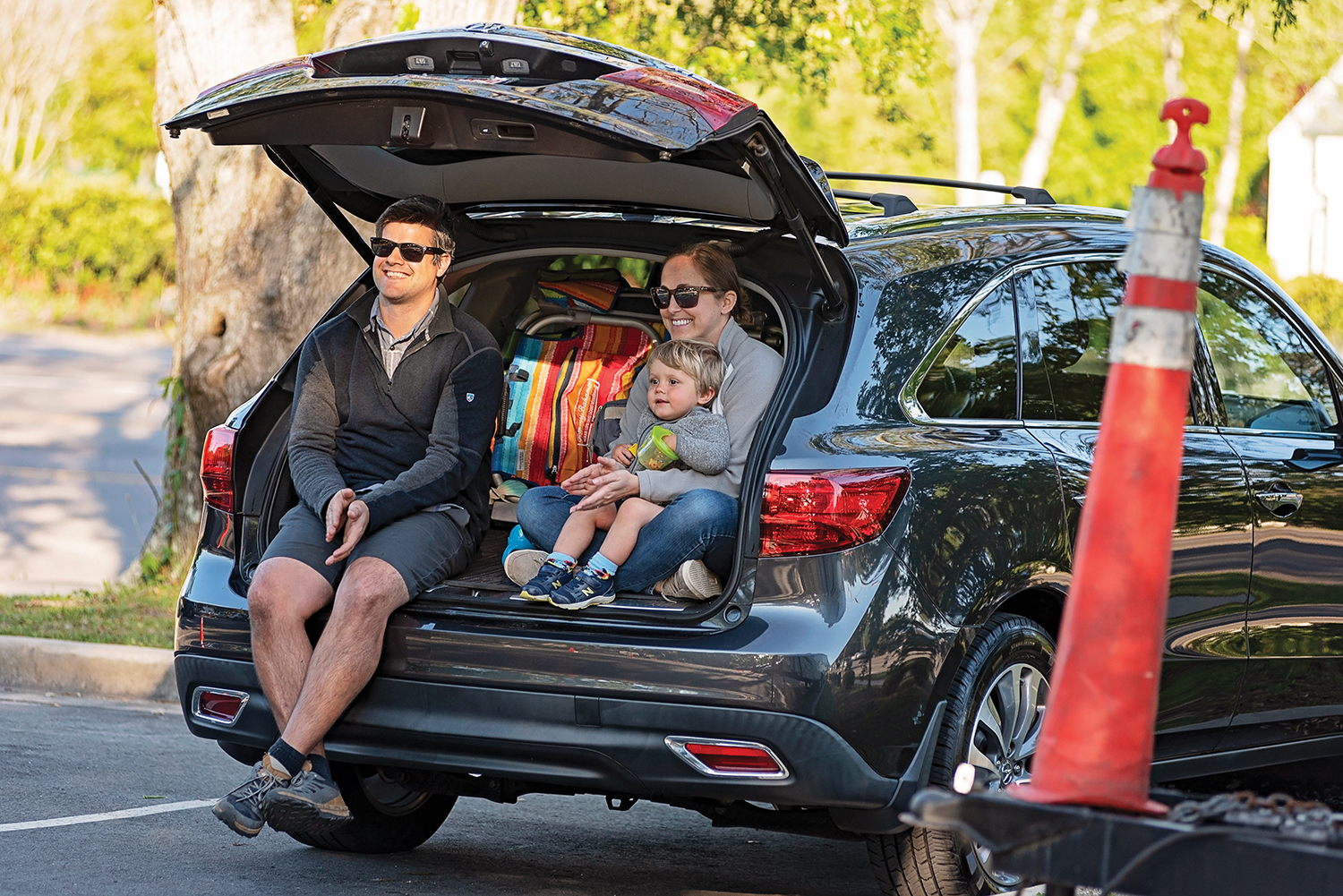 Watkins is calling on musicians he had lined up to play at the Oleander Drive restaurant for the concerts. Most are thrilled to participate, and people attending the events have been happily surprised to have live music to listen to. They’ve also been generous with their tips, says Watkins. Watkins says he may get some criticism for the Drive-Up Music series, but he consulted with medical personnel on how to implement the concerts and hopes people will see the value they give the musicians and community.

“Some will say this is too soon, that we’re not respecting social distancing,” Watkins says. “Others will say it’s the wrong time for music. To both, I say we put a lot of time and thought into this. We put safety first. Hard times are always the right time for music. It lifts people’s spirits. We’re showing the community we are all still in this together and trying to help the local economy.” 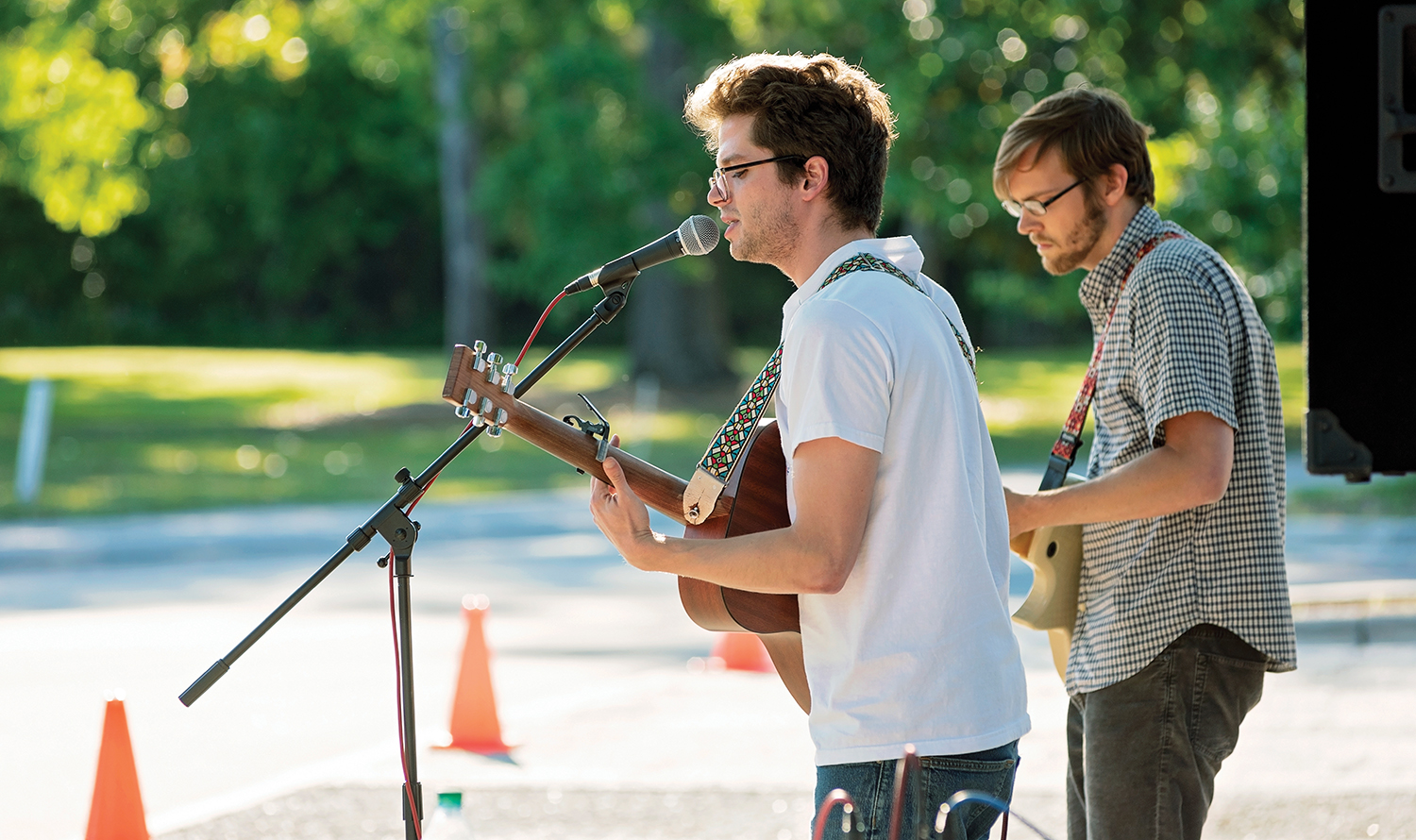 And, if you can’t go to the music, KEVIN BLAKE, lead technician and sales representative for Cryostop Pipe Services, brings it to you with his mobile music concerts. Soloists or bands play from the back of one of his trailers as it tours local neighborhoods.

Blake, an avid music lover, often helps area musicians. The mobile music concerts are another way to meet that goal while uplifting those with the stay-at-home blues.

“We’re doing this for the community and the musicians and to spread a little cheer,” Blake says. 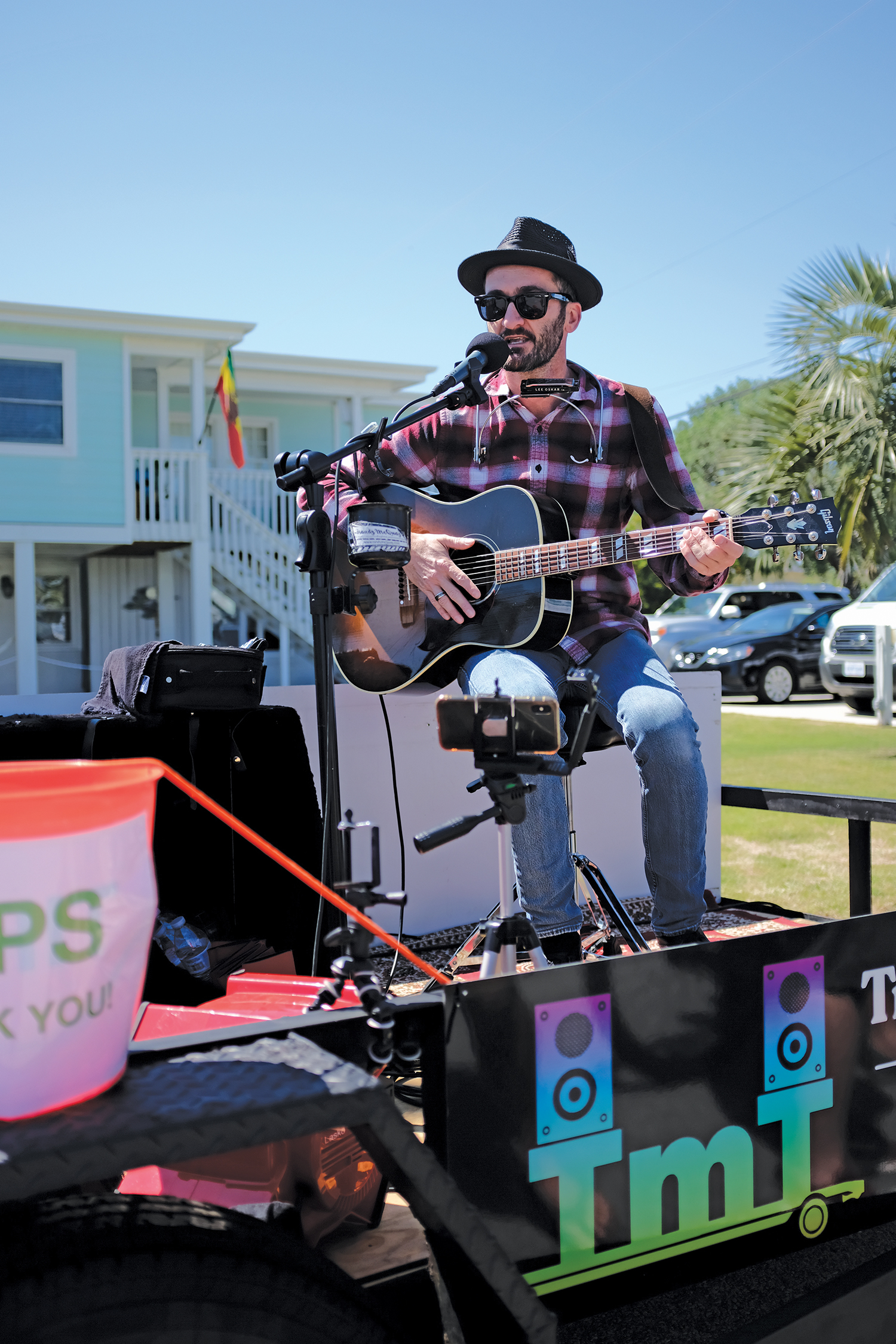 Cruising through Kure Beach neighborhoods, a flatbed trailer serves as a traveling stage for Randy McQuay.

Neighborhoods are as eager to participate in the mobile concerts as the musicians. Folks come out to their yards to listen and dance as the trailer slowly traverses the streets; some people ride their bikes, keeping distance between them, behind the trailer. One reason the venture is so popular is that Blake tries to match the right band to each neighborhood by learning what residents want to hear beforehand.

Blake donates 95 percent of the business sponsorships he receives to the musicians, and many people give the musicians cash or virtual tips.

Blake plans to continue the mobile concerts as long as people want them.

“Music brings joy to us at all times, and we’re trying to share this with the community and musicians,” Blake says. “We’re just trying to bring a little normalcy back but in a different way.”