Ericca Burke on journey into acupuncture and Chinese medicine 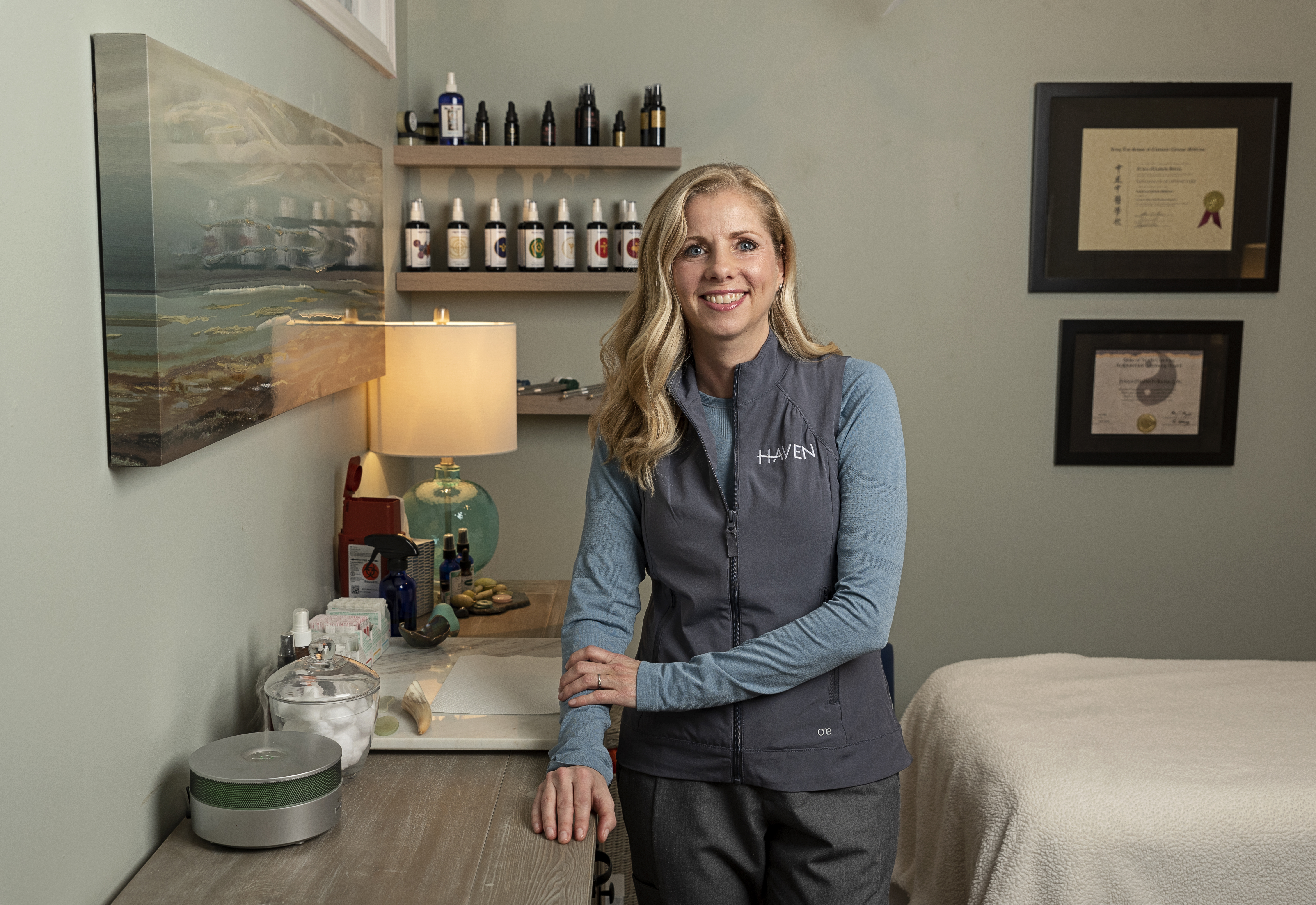 Patients may be surprised to know she completed a four-year masters-level program for acupuncture, a form of alternative medicine, at the Jung Tao School of Classical Chinese Medicine.

Her first-year course of study included the basics of what would be considered a Western education, including anatomy, physics, and physiology. She also studied energetics and point location.

During her final year of school, she was an intern and saw patients.

Burke is not only an acupuncture practitioner, she’s also used it for several reasons, including pain relief.

It is believed acupuncture, perhaps the most well-known of traditional Chinese medicine, originated around 100 B.C. in China.

Thin needles are inserted into the body to improve physical and mental health.

The practice varies depending on the country in which it is practiced and practitioners’ philosophy.

There has been wide debate about acupuncture’s effectiveness and whether its theories and practices are based on scientific knowledge. But Burke sees firsthand how it helps people.

Burke’s undergraduate path circuitously led her to her new passion and career.

Before becoming an acupuncturist and business owner, Burke worked at IBM.

Here she learned to tailor a system to fit a person or a user.

The focus, she says, is on the individual. This is often contrary to how we develop technology and then, as humans, learn to adapt to it.

She interned at Lotus Software, which later became part of IBM. She worked to ensure the Lotus spreadsheets were easy to use.

Burke became interested in management and got her MBA. She stayed with IBM for 24 years in a number of, what she calls, fascinating positions, including manager of different user experience teams and in marketing and operations.

During this time, her interest in health and wellbeing grew and she studied different modalities whenever she could. She’s a certified yoga teacher and has a fitness instructor certification. She’s also a Reiki master.

Reiki is a type of alternative medicine focused on energy healing.

Burke spent part of her early life in Massachusetts and then moved to Virginia with her entrepreneur husband. She was working at home for IBM when they had two children. They moved to the Wilmington area more than five years ago after vacationing here.

“Having kids really gave me the desire to actually change my career to focus on aspects of health which had been a hobby before,” she says.

She chose acupuncture in part because it can take a very scientific and analytical approach in terms of the way you diagnose and treat patients.

“I felt that this fit very well with my engineering background,” Burke says.

She decided to take a proverbial leap of faith and go to acupuncture school.

“Every single thing that I learned I loved and I wanted to learn more,” Burke recalls.

Of her work at HAVEN she says, “I can’t explain the wonderful feeling that occurs when you help someone with a problem they have that may have been plaguing them for years.”

She opened HAVEN in 2017. A planner and plotter by nature, Burke thought long and hard about what to name her business.

She wanted to reflect what she envisioned: a place where, as soon as you walk in, you feel comfortable and relaxed. It seems to have worked. She says some people actually fall asleep during treatment.

Burke also educates people about acupuncture. Some people erroneously believe the needles are monstrous. In fact, she says, they’re very thin; several could fit inside a typical hypodermic needle used in doctors’ offices. As a practitioner, she must pass medical board exams.

In addition to acupuncture, HAVEN offers other modalities such as Gua Sha, scraping the skin with a massage tool to improve circulation; auriculotherapy, ear acupuncture; and ear seeds, small seeds that are held to acupuncture points on the ear with adhesive tape.

Ear seeds are particularly helpful for children and people who are afraid of needles. While some insurers will cover acupuncture, HAVEN doesn’t accept it, but will give patients a coded receipt so they can get reimbursed by their insurance agency.

In some cases, she will work with insurance companies to get prospective patients preauthorization for services.

Burke finds a bit of irony that she spent so much of her corporate life sitting behind a desk thinking about how to improve experiences for people and now she does that face-to-face through her practice.

Her practice isn’t an either/or choice that causes her to eschew Western medicine for Eastern.