Lynda Stanley steps into role with years of experience 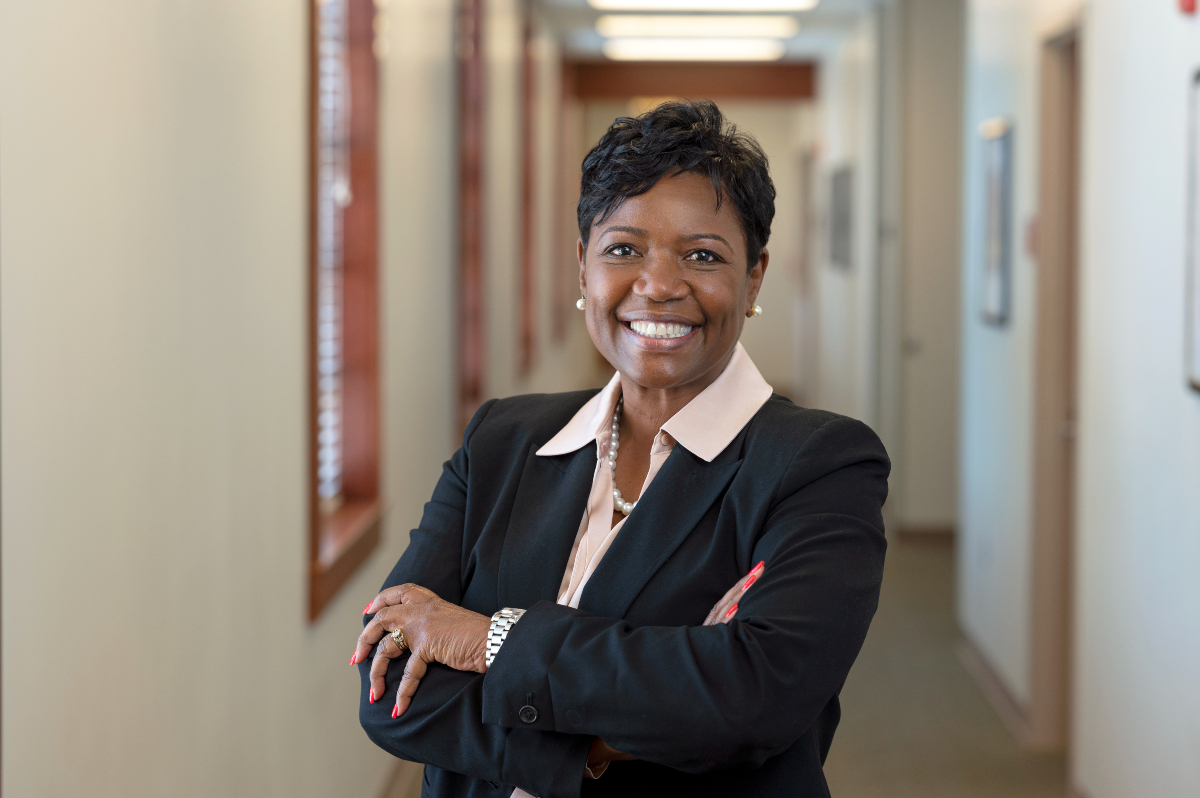 LYNDA STANLEY knows Dosher Memorial Hospital inside and out. Her thirty-five-year career with the Southport health care organization has familiarized her with all the facets of its patient care as well with the management decisions that have enabled it to remain a successful small community hospital.

And she has long been an advocate for Dosher in the community, so she has her finger in the wind, gauging community expectations and perceptions.

In mid-September, Dosher’s trustees announced that Stanley, currently the hospital’s president, will also become its CEO in December when physician Brad Hilaman retires from that post. In making the announcement, board of trustees chairman Robert Howard said Stanley has long been the face of the hospital.

“She has always promoted the hospital through some good times and not-so-good times,” he said in a news release. “I cannot express enough how comfortable I am that Lynda has agreed to accept the CEO and President position.”

“Well, I did do some commercials for the hospital, so I guess people associate my face with Dosher,” Stanley says with a laugh when she hears that comment.

Having an entire community hospital – and by extension, the community it serves – under her care is a natural outgrowth of Stanley’s upbringing.

“I grew up in a small family business that was a family care home. My family had always been in the business of taking care of others, and that set the tone for me to want to be in health care,” she says. “I realized, however, that my role was not to be at the bedside,” Stanley says.

In high school, Stanley met a young woman who was a medical technologist and talked about the importance of that discipline within the hospital setting. Stanley decided a career in medical technology would be a good fit for her interests; she pursued a bachelor’s in that field at the University of North Carolina at Greensboro.

After beginning her career at Candler Hospital in Savannah, Georgia, Stanley came to Southport in 1986 as laboratory manager at Dosher. But others saw greater potential in her.

“I was encouraged by (Dosher’s) CEO at that time to go back to school and get master’s degree,” she says.

Accepted into Central Michigan University’s Masters of Health Care Administration but not being within easy commuting distance, Stanley drove to a satellite location at Fort Bragg every weekend for two years to complete her coursework. But even with that advanced degree and the skills it provided, Stanley wanted more.

“Being a lifelong learner, I went on to receive my FACHE certification,” she says, explaining that by being a Fellow of the American College of Healthcare Executives gave her broader knowledge about hospital management. She served as Dosher’s chief operating officer for a time, gaining a comprehensive picture of the hospital’s responsibilities and capabilities. As her role with the hospital shifted into leading the Dosher Foundation, however, she needed specific development skills, so – lifelong learner that she is – she earned a certificate in philanthropy from the University of Massachusetts.

As president of the foundation, Stanley drew upon her deep knowledge of Southport and Brunswick County.

“I was on the board of Brunswick Community College for over twenty years, was president of the Southport-Oak Island Chamber of Commerce, and I still serve on the board of what was BB&T and is now Truist,” Stanley says. “People sometimes didn’t know where I worked, but it all circled back to the wellbeing of the community.”

Stanley’s husband, Joe, has been instrumental in connecting her with Brunswick County. He is a native of the area and runs a family business.

“He’s very engaged with the community as well,” she says.

She sees Dosher Memorial Hospital as being at the heart of the Southport-Oak Island community since its founding in 1930.

“Dosher still exists as a small community hospital because of the people,” she explains. “From the very beginning, Dosher was created because the community voted to tax themselves to support a hospital. Support from the community is definitely one of our strengths, and that rolls into the staff that are dedicated to doing the work and providing the care.

“You see people in the grocery store and on the street: these are your caregivers. I tell that to new hires: it’s their responsibility to provide the best care because of that community support. I told the board I would never take on this (new CEO) role if I didn’t have a team of people with a commitment to care, to do the right thing. I try to hold myself and the staff to the standard of great expectation because we have an obligation to take care of everyone who walks in the door.”

Stanley is happy to announce that the hospital has turned a significant financial corner. After years of running deficits, in July 2021 the hospital was $1.7 million in the black after projections were for red ink of $3.3 million to $3.5 million.

“That’s a turnaround of about $5 million,” she says. “It’s a positive balance sheet for the first time in over a decade.”

In recent years, the hospital has won recognition for several areas of specialization, including being named among the nation’s top one hundred hospitals for joint replacement and was the first in the region to offer robotic joint replacement technology. Dosher has also won plaudits for its wound care program.

“Today we have a niche as a small community hospital, and because of the growth of the community we’re in a good position to be successful,” she says. “We’re always looking for opportunities to collaborate with Novant so our community has the best care.”

IT APPEARS THE HOSPITAL HAS INVESTED HEAVILY IN TECHNOLOGY IN RECENT YEARS. IS THIS CORRECT AND WHAT IS THE FOCUS?

“Whenever we invest in technology, it needs to answer the question, ‘How will this help our patients?’ Our most recent and substantial investment has been the addition of robotic arm-assisted surgery for knee replacements. Because we have become a destination of choice for orthopedic surgeries, it was a good fit for what our patients are already asking for.”

YOU’VE BEEN WITH THE HOSPITAL FOR MOST OF YOUR CAREER. WHAT ARE THE MAJOR CHANGES YOU’VE SEEN IN DOSHER?

“I’ll never forget in the late 1980s watching one of our physicians smoke a cigarette inside the hospital. Keep in mind, that during that time, this was an acceptable practice. However, this image reminds me what a long way we have come in regard to prevention, both with staff and patient policy as well as how we approach health care. I’ve seen a much greater focus on wellness in primary care. How can we keep you healthy instead of simply treating patients who are sick.”

WHAT IN LIFE HAS PREPARED YOU FOR THIS LEADERSHIP ROLE?

“The most important preparation for this leadership role and for the moral and ethical code I’ve tried to adhere to throughout my lifetime can be credited to the tenet by which I was raised, which is, ‘Do unto others as you would have them do unto you.’ I was extremely fortunate that after I had completed my education, I found an organization that mirrored my own personal values, and I knew that once I began working at Dosher, that I had found my home.”

BEYOND COVID, WHAT IS THE HOSPITAL’S GREATEST CHALLENGE FOR THE FORESEEABLE FUTURE?

“In addition to the strain on health care due to the COVID response in hospitals, one of the areas of collateral damage is growing mistrust in health care professionals. A lot of this, as we know has been brought about by misinformation about the COVID vaccine. Health care workers have chosen their careers based on a sincere desire to help keep people in their communities well and to help those that are sick. For us to do our job and do it well, we need to work on bridging that gap.”

WHAT DO YOU HOPE YOUR LEGACY WILL BE?

“First and foremost, my mission is to make a positive impact on our community, and I am fortunate enough to have an opportunity to do this through my leadership role at the hospital. Being committed and dedicated to the success of Dosher Hospital enables better health and well-being for the entire community, and that is something I am very proud of.”