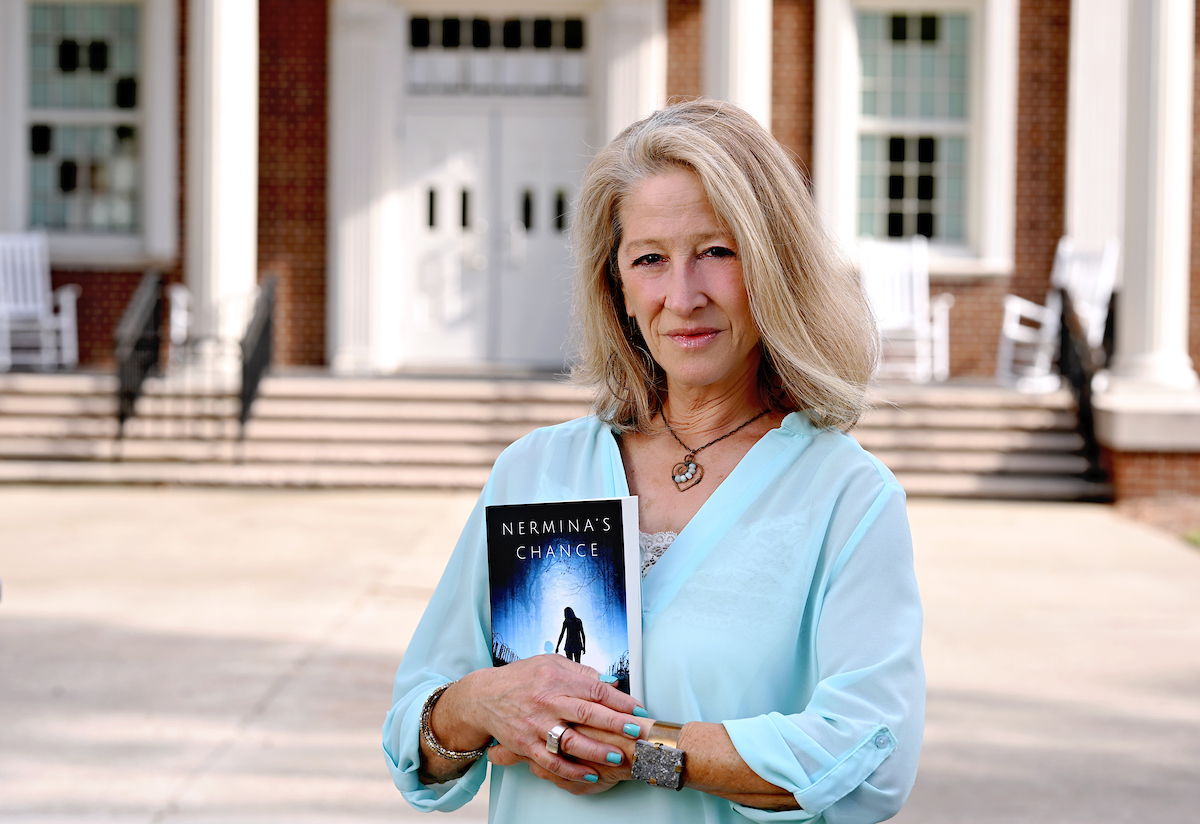 DINA GREENBERG is giving a voice to survivors of combat and sexual abuse through her first published full-length novel “Nermina’s Chance.” The book begins in 1992 Bosnia at the outset of the Serb forces’ campaign of systematic rape and genocide. It is the story of Nermina and her daughter Atika. Nermina is a second-year medical student in Sarajevo who has grown up in a secular Muslim family where both parents are doctors and her brother is a financial analyst. Nermina experiences the beginning of a war that destroys her entire family.

The book is not lightweight material. In Bosnia, Serb forces used rape as a primary weapon of war, leaving a population of children born as a result of these acts of violence. Greenberg recalls that she wasn’t especially politically aware during her high school and college years.

“But in the ‘90s and 2000s, I saw many news reports. The images of war in Bosnia stuck with me and the stories resonated. My way of processing everything was by keeping paper files and newspaper clippings,” Greenberg says.

The book also has some lighter moments. “It’s not a beach read, but there are times you will laugh and times you will become angry with characters’ bad behavior,” she says of the story which took more than a decade to write.

Greenberg’s writing career quite possibly began in third grade. She was the editor of Read Along with Three C, her third grade newspaper named after her teacher, Mrs. Crumb. In high school Greenberg received a scholarship for journalist writing. She completed her bachelor’s degree in English and her first master’s degree at the University of Pennsylvania in the school of arts and sciences.

It was in Philadelphia that she had the privilege of shadowing hospital chaplains at the Level I Trauma Center at Penn which treated gunshot victims, veterans involved in motorcycle and vehicle accidents, and domestic violence, many of which were consequences of post-traumatic stress disorder.

“I became interested in how to use my creative writing skills to help people express what they had been through by writing about them as a source of healing,” she says.

In 2012, Greenberg was leading creative writing workshops in New Jersey when she was accepted to University of North Carolina Wilmington where she obtained her master of fine arts degree in fiction. Since that time, she has done copywriting across diverse markets, teaching and coaching of new and experienced writers, development of communications plans, publishing, research, and web content development for consumer products, technology trends and health care. She teaches creative writing workshops at Cameron Art Museum for the general public and some specific workshops for military families and veterans.

Greenberg’s book required extensive research and hours of discussions with academics to ensure accurate historical details. Through an internet search, Greenberg found ZRINKA BRALO, now CEO of London-based organization Migrants Organise. Bralo was a young television journalist at the beginning the war in Sarajevo in 1992 who was trapped inside a TV1 CNN studio with her colleagues during the siege. Bralo escaped. The details in the opening chapters of the book are based on Greenberg’s extensive interviews with Bralo who recently read the entire 427-page draft, combing through for details like the correct use of foreign words and dialects.

“I am beyond grateful for how Zrinka helped me,” Greenberg says.

Greenberg hopes that readers will learn about intergenerational trauma from Nermina and her daughter. “Trauma is something passed on through the generations. It’s impossible to shield the descendants of survivors from trauma.”

“I’ve met people who have faced their own horrific trauma through the powerful tool of writing. In conjunction with the right kind of therapy, writing can be healing,” she says. “Telling your story is one of the most powerful things you can do.”

Greenberg’s book is available at Pomegranate Books and Old Books on Front Street in Wilmington and through online retailers. The official book launch will be held on October 29 at Flytrap Brewing from 6 p.m. to 8 p.m. Greenberg will be reading from the novel and signing her books. Greenberg is also collaborating with two nonprofit organizations serving people traumatized and displaced by war through donations to Most Mira and Migrants Organise.

Dogged Pursuits: One on One