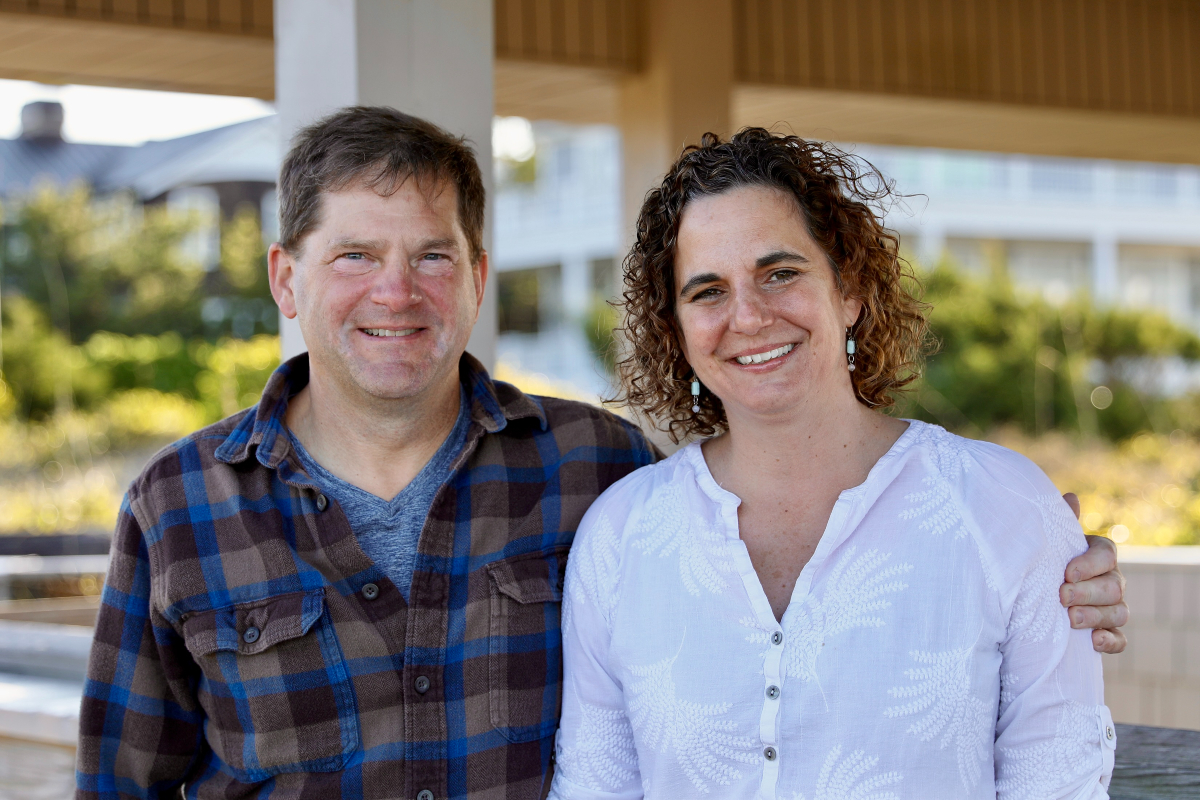 JEANETTE PHILLIPS and JASON ZOMBRON truly are living a salt life. As the new owners of Sea Love Sea Salt, the husband-and-wife team is tapping coastal waters to add zest to cuisines of all kinds.

“We get our water from Wrightsville Beach, and do everything the way [former owner] AMANDA JACOBS did it,” Phillips says. “We don’t interfere with the natural process and we harvest the salt when it’s ready. We use many of her recipes for the flavorings and have developed some of our own.”

Asked the advantages of sea salt over other sources of salt, Phillips says, “We know ours is completely pure: just water, sun, and nature. It’s a clean process. Environmentally, you know you’re not getting something that has been shipped across the country; we’re using local sea salt.

“Most of our flavors are from local products and local farmers, so there’s a fresh taste: no chemicals or plastics. Part of the reason we developed our herb salt is it’s something you can use instead of table salt. You can use it in salad dressing. You are getting a lot of nutrients when you use our herb salt.”

The salty endeavor is Phillips’ and Zombron’s first foray into business as a couple, according to Phillips. Zombron has spent most of his career in sales of outdoor equipment; she has been a teacher and has worked in health care. Phillips says both of them are “big foodies; we love adventure, the ocean.” They were looking for something creative to do together.

“Throughout our marriage, Jason has brought business ideas to me, from kayaks to beach stands,” she adds. “I’m the practical one who says, ‘This doesn’t fit me.’

Then Zombron found Sea Love and shared the idea with his wife.

“I got on YouTube and learned about Amanda, and brought the information to friends and family members,” Phillips says. “The more I learned about Amanda and Sea Love, the more I thought it was a perfect fit for us. We had always been interested in salt, from living in Seattle and from our travels. When we were scheduled to tour the facility with her, I made her an herbed salt, jarred it up, and drove out there.”

Of all Sea Love’s prospective buyers, only Phillips and Zombron showed Jacobs a sample of their own concoction. She decided they were worth their salt, so to speak, and chose to sell her enterprise to them. 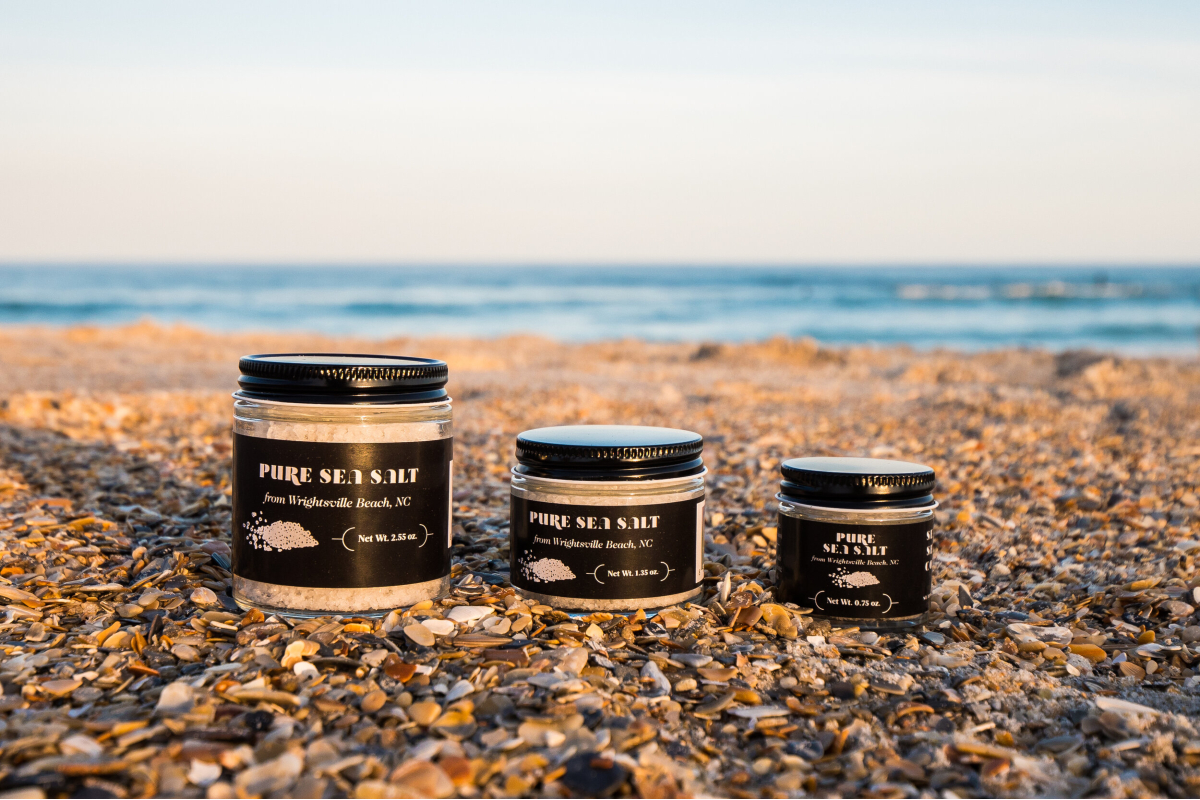 Soon after purchasing Sea Love last summer, Phillips and Zombron tackled a problem that had plagued Jacobs: creating enough salt to meet the demand. They have built a second “salt house” behind Jacobs’ original structure on Sea Love’s property in Pender County. The new structure, like the original, is a greenhouse equipped with large shallow trays to hold saltwater. The sun’s warmth dries up the moisture, leaving salty crystals.

With a more sustainable supply of their products to provide existing customers, the new Sea Love owners have added a couple of new accounts. They have also been able to fulfill orders from a new source: viewers of the PBS show Startup, which featured Sea Love Sea Salt as one of five Wilmington ventures last October.

“The first month after the show aired, online sales went up about seven times more than the average month,” says Zombron. “It dropped the following month but sales were still four or five times the previous average. That show has re-aired in certain parts of the country. Out of the blue, we’ll get small orders coming from Wisconsin or some other place, so we know the show has been rebroadcast in individual markets.”

That nice bump has shown Phillips and Zombron that they can fulfill orders for customers around the country, but they are determined to grow their business organically.

A measured approach to growth doesn’t mean the couple doesn’t have ambitious goals for their venture.

“We would like to be known more regionally,” Phillips says. “We already have accounts in Charlotte and Durham and want to push the ‘Made in NC’ aspect of our products. Another long-term goal is to have more education out at the salt farm: more tours and field trips. We want to teach kids and people the things you can do with salt and we want to do community events.”

Another goal is to build a zero-grid house on the Pender County property near the salt farm, which would align with the family’s and Sea Love’s environmental values. The family could stay there during busy work periods, and use it to show visitors how a self-sustaining dwelling uses rainwater, solar panels, a wood stove, and a composting toilet to provide for life’s necessities.

“We do want to take things slowly so our growth is mindful in terms of our limitations,” Phillips says, noting that she is still working another full-time job and Zombron is working elsewhere part-time. They hope to transition to a full-time focus on Sea Love this summer, but already, Sea Love has added a new flavor to their family life. For one thing, their two sons, twelve and nine, are an important part of the business.

“Our older son is good at unpacking and loading, helping us get things to market,” she says. “Our younger son is good at inventory and sales, counting and understanding all these things. One of the benefits of owning Sea Love is that it has brought our family closer together. We work as a team and learn more about each other.”