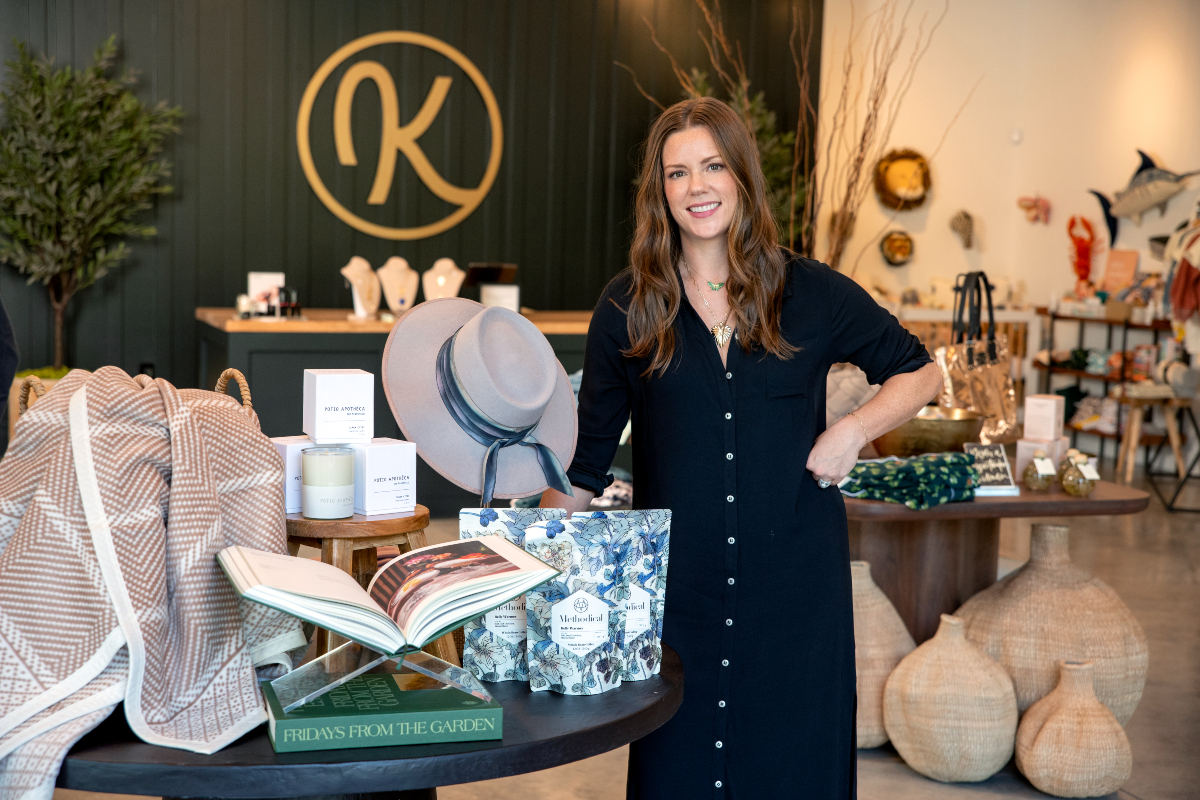 SARAH HINSON is bringing an upgraded shopping experience to the Riverlights area with her store, Kasa Mercantile. “I saw a hole in the market ready to be filled,” she says. “There are really no boutiques on this side of town—between Midtown and Carolina Beach.” The idea for her own store had been brewing for quite some time. Ever since her days working in retail, she knew this day would come but just not sure where or when.

The “where” part came together after a move to Wilmington from Raleigh. After arriving in the city almost eight years ago and working six of those years in real estate, it was time for a transition. She had been keeping her eye on the Riverlights area (where she happens to live) knowing that it had potential. Hinson looked all around town at other smaller, quainter places with better-known foot traffic but something in her gut told her to stay close by. “I have two small kids now, and I realized it would be better to be near home,” she says. Plus, her real estate instinct told her to take a gamble on the Riverlights neighborhood. “I could see a future of long-term growth development happening there,” she says.

The “when” part was decided for her when space became available. “I was keeping tabs on what was happening in the development,” she says. In January, Hinson heard of an available spot opening up in September. Personally, she was ready for a shift too. As a mother of two, she was feeling “a little lonely as a stay-at-home mom and that the walls were closing in,” she says. Finally, at the urging of family and friends and “the feeling that someone else will do it,” Hinson recently opened Kasa Mercantile.

The North Carolina native studied merchandising at ECU and received her master’s from Oklahoma State University. “I have always loved studying people’s buying behavior and figuring out the ‘why’ behind it,” she says. With a background working for small boutiques along with big department stores, such as Nordstrom, she knew her next step in retail would be working for herself. For her shop, Hinson brings a modern spin on a village-like mercantile. Sophisticated home décor, gifts, upscale clothing, and beauty and wellness items along with pantry staples create an atmosphere of boutique meets general store.

Currently, Hinson’s main goal and challenge are sourcing unique brands to bring to the area and products not already carried here. She is constantly on the hunt for exclusive brands such as Flamingo Estate, Mauritius Leather, Freya and Jane Win jewelry. She readily admits that “yes, there are boutiques in Wilmington. But many of them are high-end.

“With my background, I want to offer customers quality products at reasonable price points and to make Kasa a stylish shopping destination for the growing Wilmington market.” She also plans to hold private events at the store in the near future along with specialty trunk shows and sip ‘n shops.