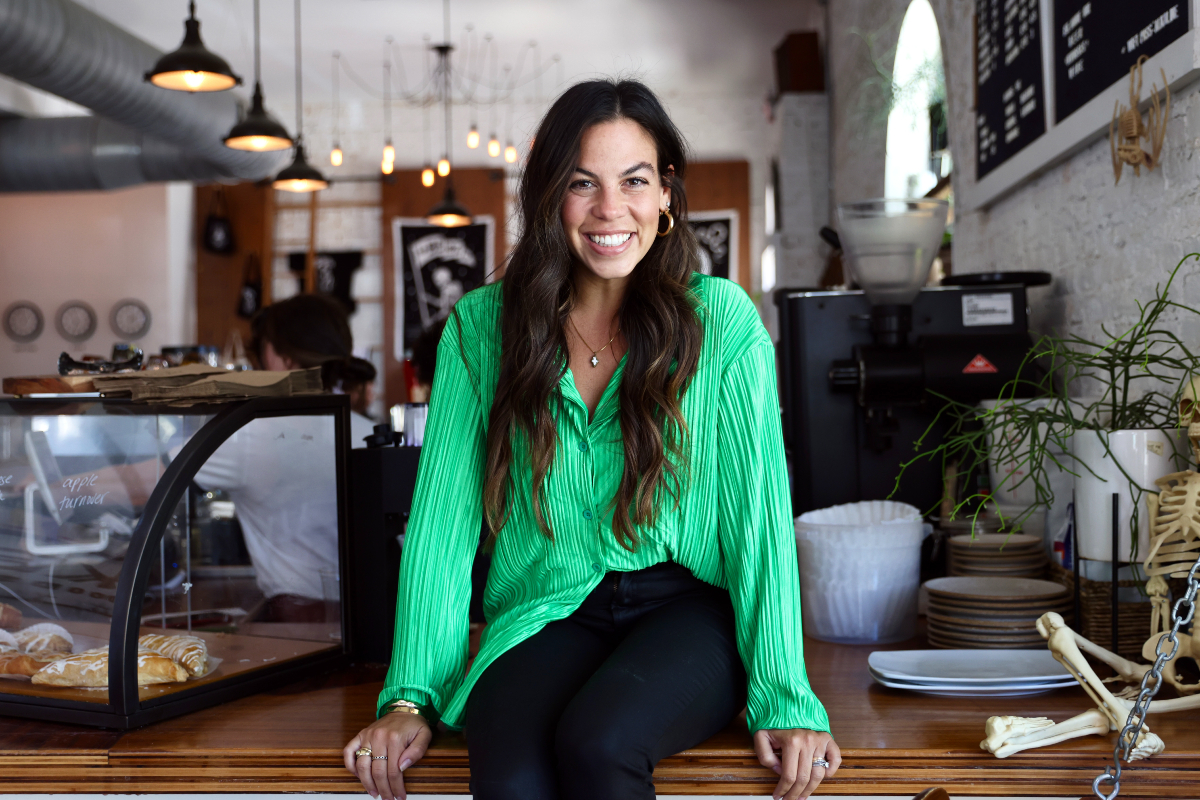 What do each of us make of opportunity, chance, or tantalizing dreams? MICHAELA BATTEN explores the stories of individuals who have taken a perhaps daring turn in life in her new podcast, The Path of Least Expectance. The series, available now but set to launch officially on November 2, is the latest in a series of career changes for Batten herself.

“I grew up in Wilmington but wanted to be a professional dancer, but I also wanted to go to college. So, I joined a tap dance company in New York City and enrolled in Parsons School of Design,” she says. “The dance company I was in traveled internationally, but on weekends, so I could do that through college.”

Although Batten loved what she was doing in New York City, family concerns brought her back to Wilmington – temporarily, she assumed – but kept her here. Within a nine-month period, she married, her grandmother died, her father died, and she learned she was pregnant. In the face of those major life events, Batten turned in an unexpected direction.

“I was a professional tap dancer and had a design degree, neither of which worked in Wilmington, so I opened a women’s shoe store,” she says.

Further zig-zags involved doing radio announcing, which led to a job as a radio show anchor; selling the shoe store when she was expecting her second child, and helping her husband open Bespoke Coffee in downtown Wilmington. Reflecting on her path thus far and talking with others whose lives had likewise followed unplanned twists and turns, Batten conceived the idea for her podcast, the first episode of which she released August 1.

Taking what Robert Frost termed “the road less traveled by” takes courage, Batten says, and her podcast guests talk about struggling as well as finding success, enjoyment, and peace.

“Some people are flat-out afraid to fail,” she adds. “That’s a natural instinct, to protect ourselves. But if you’re not failing, you’re not growing. Sometimes you need to fail in order to learn.”

She knows that from her own experience.

“I have done so many things in life that didn’t turn out; I’ve made sharp turns to the left and right – not what I expected,” she says. “I see so many people who say ‘I can’t change paths’ or, ‘I would never make it far down that path.’ So, I highlight people who have had crazy twists and turns. Maybe they have not reached the finish line: life is one big race. There are so many stories that need to be told, to inspire others.”

One story that is particularly inspiring, she says, is that of a man with cystic fibrosis who has reached the age of 50 – an unusually long span for someone with the lung disease. He has been near death but received a double-lung transplant and – supposedly unbeknownst to anyone – has completed many triathlons, finding his family and friends at the finish line to greet him.

That kind of inspiration is precisely the point Batten wants to make in The Path of Least Expectance: to help people find within themselves the courage and determination to diverge from a road that has grown rocky or rutted.

“Even if (the podcast) sparks one idea, it’s worth it,” she says. “Maybe a listener has never asked themselves what they really want to do. If I get one person like that to find courage to do that, it’s rewarding. These stories provide motivation and encouragement.”

Another point of the podcast is showing people they can make changes on their own.

“We don’t all have team behind us,” Batten says, pointing out that most of us don’t have a rich uncle to bankroll a venture or provide a cushion to enable a career change. Her podcast project has likewise been DIY.

“If you want to do something, you have the world at your fingertips. I just Googled it: how to start a podcast. It does take a second, but I got the gist. I had to buy a microphone, but I use a free editing software program. It’s been really homegrown, which is the story of my life. Everything my husband and I do has been blood, sweat, and tears, which is how we like it.”

Batten conducts Zoom interviews with her subjects from a small closet on the ground floor of her home: “It has great acoustics and my children can’t find me,” she says. She records the audio and, after editing it, uploads it to podcast hosting service Buzzsprout, which makes it available on Apple and Spotify. Thanks to Zoom, Batten can also do a video of the conversation, which she airs on her YouTube channel. The length of each episode varies but is usually about an hour.

The podcast has already gained a following: “We’re in the hundreds, not into the thousands yet,” Batten says.

Followers and other interested people are invited to the Season 1 launch party Nov. 2 at Bespoke Coffee, 202 Princess St. in Wilmington, from 6 to 9 p.m. Batten has invited some of her subjects, and there will be a panel discussion. Mostly, though, it’s a celebration of a new path for her, and an opportunity to network for attendees.