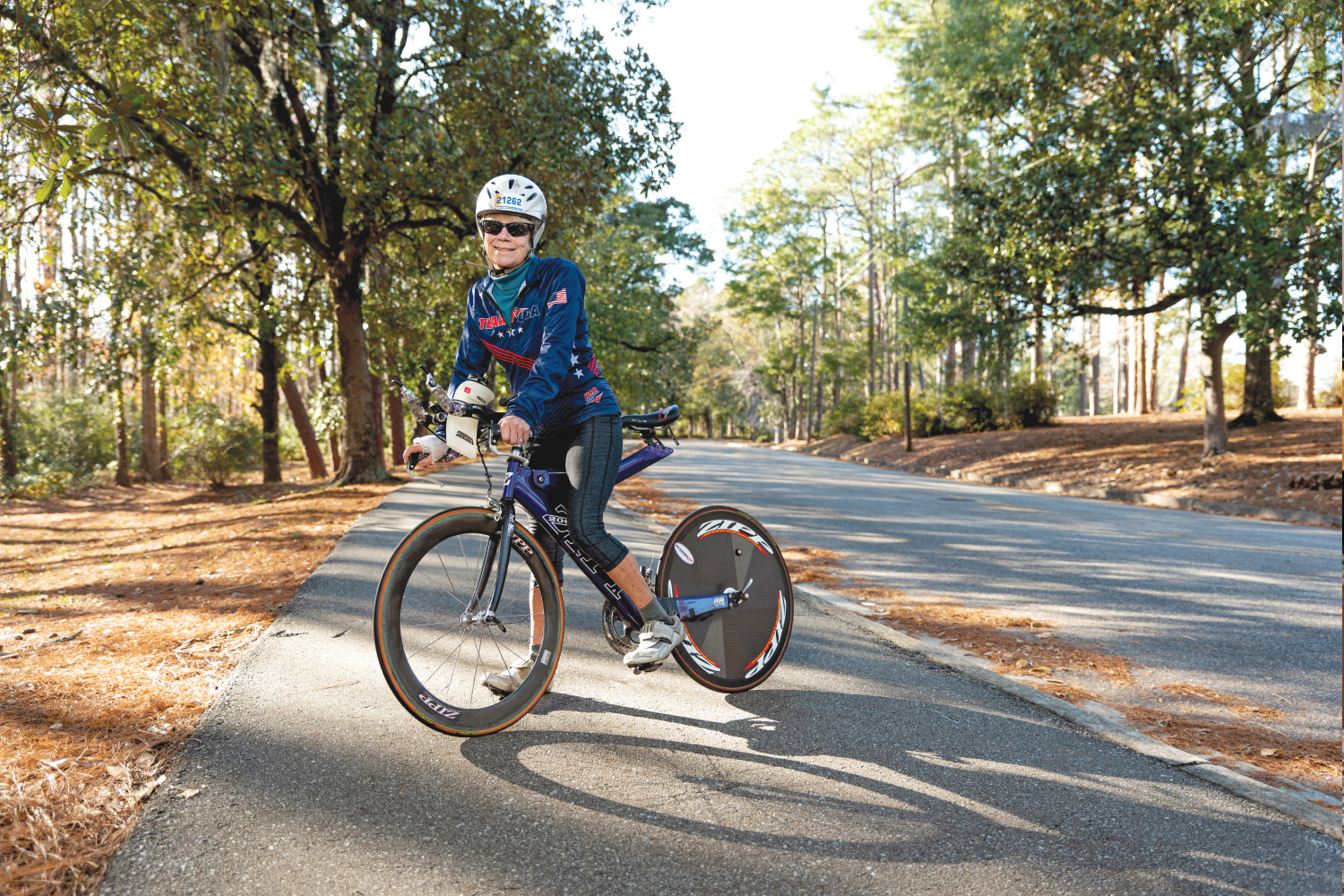 When PHYLLIS MASON is inducted into the Greater Wilmington Sports Hall of Fame in May, she will be the first triathlete recognized for her achievements.

During a continuously active thirty- three-year athletic career that began in Wrightsville Beach in 1986, Mason swam, biked, and ran all distances – from International Olympic and Ironman to sprint – to compete in 244 triathlons worldwide. During that time, she was ranked No. 1 in the nation in her age group over a ten-year stretch beginning in the mid-1990s.

In one of those triathlons, she was the oldest competitor at age forty-two, but she did not stop there.

Her national standings landed her a place on the USA Triathlon team that ranked her All-American fifteen times. Mason silver medaled in New Zealand in 2003; finished fifth in her sixty to sixty- four age group in Hamburg, Germany, in 2007; and came in fourth in her seventy to seventy-four age group in Rotterdam, The Netherlands in 2017.

But, her proudest achievement so far? Induction into the Greater Wilmington Sports Hall of Fame, she says.

“I am honored and humbled,” says the seventy-one-year-old grandmother of four from her Port City home. “I never thought they’d open the door for a triathlete.”

Now retired from competition, Mason has not slowed down – much. She still swims five hours, bikes one hundred miles, and runs fifteen miles – a week.

“What I tell people is that I’m addicted to that lifestyle,” Mason says. “No medications, no problems of any kind. It’s something that everyone could get themselves into and be in much better shape. They’d be so much better off.”

The North Carolina native was a natural-born swimmer. “We had two 50-meter pools in Hickory,” she says.

Beginning at age eight, she swam competitively until she was sixteen.

When she moved with her husband and children to Wilmington in 1975, the Masons were preoccupied with the day-to- day demands of life.

“My husband and I realized we were out of shape and had gained weight. We started competing and lost a lot of excess weight. Competition in the running races was a lot of fun,” Mason says, adding, “We had been running with a group of men who had been competing in the Wrightsville Beach Triathlon … who (after some back-and-forth negotiations said) they would be delighted for me to start training with them. Coming from a swimming background helped because I could pretty much outswim them.”

The addition of cycling to her regime did not deter her one iota.

“When I had two small boys, I took the one on bike rides when I was pregnant with the other,” she says. “When they got old enough, we biked around the lake together.”

Mason competed in her first YMCA Wrightsville Beach Triathlon when she was thirty-eight years old. The field of women in her age range numbered nine participants that year. The ratio was four men to every woman.

“Certainly not the older females,” she adds. “You take the women in that age group today, you have half the field.”

Her first great achievement came in 2000, when – at age fifty-two – she was the overall winner of the YMCA Wrightsville Beach Triathlon. From Wrightsville Beach, she traveled to the nationals and qualifying there, she joined the USA Triathlon team. Beginning in 1998 when she competed in Switzerland, Mason qualified in 2003, 2007, 2012, and 2017, cherry-picking only those countries she wished to visit.

“I raced all over the world,” she says.

On the local scene, Mason was asked to coach the original YMCA triathlon team and also coached the Wilmington Athletic Club team.

She started a club – open to all genders, ages, races, and occupations – but limited to thirty members, with the only requirement being a commitment to completing the triathlon.

At the behest of her sons, then ages twelve and fourteen, who were tired of watching their mother cross the finish line, Mason pioneered youth participation in the sport by convincing the owner of a statewide timing company and the pre-eminent provider of timing services to many regional triathlons to suspend the eighteen-and-over requirement by having parents simply sign a parental waiver.

“I wanted to be sure they wouldn’t be hurt,” she says.

Today, it’s her grandchildren she is grooming for triathlon competition.

“I’m working my hardest on getting the ten-year-old to do the Y triathlon the next coming year. I would like to see all four of them do it at one point,” she says, adding with a laugh, “Then I’m going to sit back in my rocking chair.”

May 3 at Wilmington Convention Center