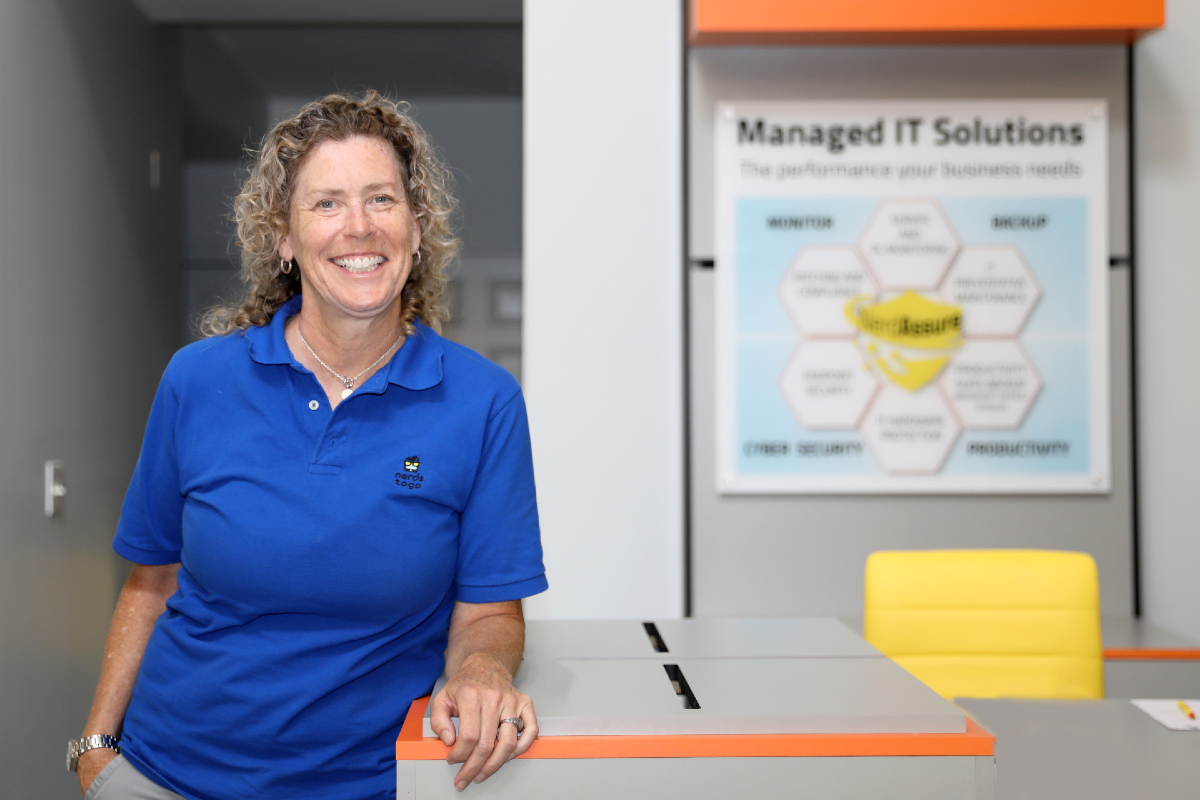 Helping residents and small businesses was a big draw for ELLEN KING in starting a Wilmington franchise of the computer services company NerdsToGo.

“That’s an area I think is underserved,” King says. “A lot of folks are reliant on technology, and if they have an issue with their computer or whatever is related to their technology, they might not always have the resources and they might not know where to go.”

King wants NerdsToGo to be the answer, with tech experts making house calls to homes and businesses, as well as offering in-store services at the 5725 Oleander Drive location.

King previously owned her own consulting company in New York and worked as executive director of special events at Syracuse University.

“With the pandemic, we really shifted all of our programs to online, and that was my first foray into doing stuff that was very technology-heavy,” King says. That included researching and setting up ways for audiences to watch a monthly speaker series remotely.

King had wanted to open a franchise, and both NerdsToGo and the Wilmington area appealed to her. She leaned on her brother, an information technology expert, to learn more about the tech industry. Then she moved to Wilmington last October and opened NerdsToGo in June.

“My family had come down for a vacation the summer before and just fell in love with the area,” King says. “There’s so much to do here. It’s beautiful. You have the ocean, there’s great food, a lot of entertainment.”

“Small businesses are working on shoestring budgets, or they’re working on a limited need for the complexity of systems that other managed service providers offer,” Simonson says. “We fill that role of where everything we do is modular.”

It’s also about fun, as the name suggests.

“From the very beginning we heard people loving the name of the store, and it helps take people’s walls down a little bit,” Simonson says. “That’s pretty important when you’re talking about tech. There’s one thing that I’ve always tried to strive for in my career, and that’s providing the information and the education in a way that’s approachable.”

“The nerds have that skill set, they have the background, the expertise,” King says. “But also, it doesn’t have to be something that is intimidating or cost-prohibitive.”

King recalls one of the technicians bonding with a customer over music recently.

“There’s a way of connecting with people and really finding commonalities with your customers outside of the need for technology,” says King, who plays guitar as a hobby.

“This isn’t just about technology, it’s about a service to the people,” Simonson says. “It can be intimidating for people as they’re getting their feet wet with the ever-growing and rapidly expanding realm that is technology. Sometimes just finding a common ground or a common interest with your client or customer while you’re in a service call or just in the store chitchatting, it breaks the ice. It keeps things light.

“We welcome people that if they drive through and they see our sign and they want to come in, we’re here,” King says.