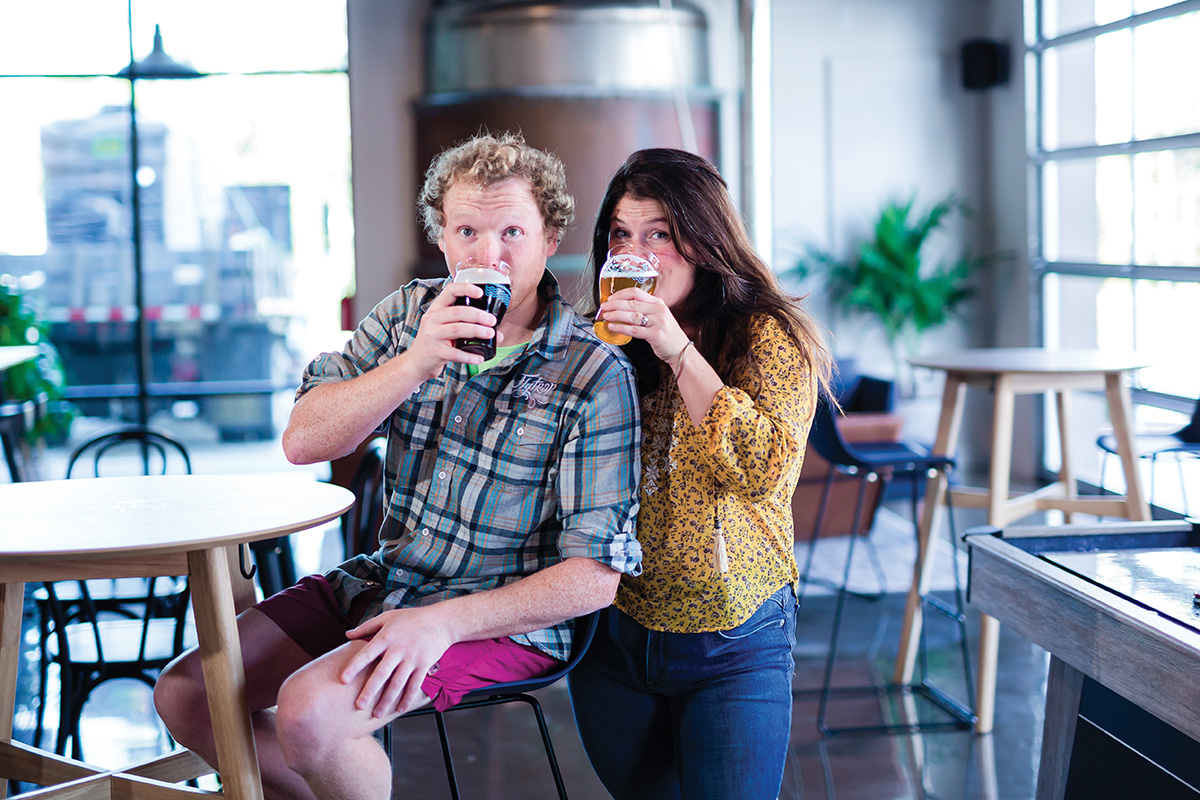 Owners JOHN and MICHELLE SAVARD held a soft opening in mid-November in the roughly 5,000-square-foot space that opens on one side to a deck running the length of the building. Seating on this porch overlooks a wooded area with a stream. The 3-acre lot is adjacent to the brewery and taproom’s existing location at 824 South Kerr Avenue.

The Venue’s sleek interior contains a bar stocked with fifteen of the company’s brews and a small shop with company-branded merchandise.

Patrons can sit at tables or in a corner conversation area furnished with sofas and chairs. Shuffle bowling and foosball games are available.

The Venue, as it’s called, can accommodate more than 200 people, according to Michelle Savard. The new parking lot has 56 spaces. There are plans for food trucks to stop at The Venue each week from Wednesday through Sunday.

Dogwood Architecture designed the space, and Christopher Building Company was the general contractor. The Coastal Manifest worked on all The Venue’s interior design.

While The Venue is designed for special events, it will serve an additional purpose for the next year or so, Michelle Savard says.

“We’re going to use it as our taproom while our old taproom next door is renovated,” she says. “This will give us a chance to love on our old business space.”

Michelle Savard says she wasn’t sure exactly how long those renovations would take, but it could be “hopefully give or take one year, so we will operate Venue as taproom until renovations are complete.”

The planned renovation at Wilmington Brewing Company’s space will include adding fermentation space, allowing the brewery to can and keg more beer.

“The canning operation has really grown and is going great,” Michelle Savard says.

The Savards launched their operations in 2012. It opened originally in the space at 4405A Wrightsville Avenue that’s now occupied by Hey! Beer Bottle Shop before moving to its current location.

During Wilmington’s early days of the brewery boom – before there were multiple sprawling taprooms and a buffet of locally canned options – the couple started out catering to homebrewing aficionados.

At the Wrightsville Avenue shop – less than a mile from their growing campus now – the Wilmington natives stocked the ingredients, equipment, and kits to cater to homebrewers, from novices to those with experience.

Before they moved back to Wilmington, the couple both lived in Beer City USA while attending the University of North Carolina at Asheville. Home at the time to already established Highland Brewing Company and Catawba Valley Brewing Company, Asheville’s brewing scene was quickly exploding.

A few years later, the activity would draw the attention of Sierra Nevada Brewing, which announced in 2012 that it planned to build its East Coast brewing, bottling, and distribution at a $100 million-plus facility outside Asheville.

While in Asheville, the couple started homebrewing. John Savard worked at a packaging brewery and then later at a homebrew supply store.

That knowledge and community building were things they brought here when they opened Wilmington Homebrew Supply.

In the summer of 2014, the couple moved the supplies store to their larger, current digs on Kerr Avenue.

The 11,000-square-foot building housed not only the retail shop but marked their move into being able to brew, serve, and sell their own beer as well. The taproom became a spot for newcomers, regulars, and families at the outdoor beer garden space.

As the Savards continue to spread out physically with The Venue and expand their brewing activity through the upcoming renovation, one aspect of their early days in business nearly a decade ago won’t be moving forward with them.

“After ten great years, we will no longer be selling homebrewing supplies,” Michelle Savard says. “We will utilize the shop space as well as our old taproom to renovate and create one larger taproom for our brewery at 824 South Kerr Avenue.

“We are forever grateful to our start as a homebrew supply store, but we are pivoting our business model,” she adds, “and we know we need a bigger taproom to create a fun community environment just as The Venue is doing now.”

This feature appeared in the latest edition of WilmingtonBiz Magazine, from WILMA’s sister publication, the Greater Wilmington Business Journal. To read more, go to WilmingtonBizMagazine.com.