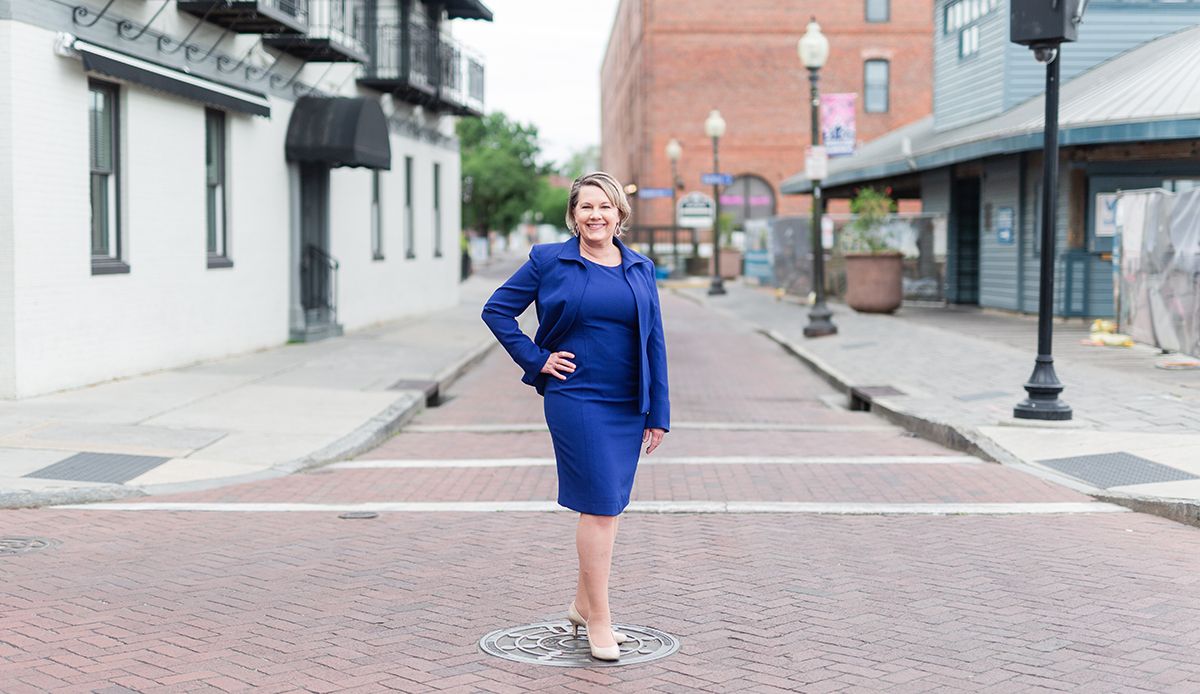 While Wilmington is growing, historians, residents, and business professionals are working hard to make sure beloved areas of Wilmington don’t get lost in the shuffle. Wilmington Downtown Inc. President HOLLY CHILDS is dedicated to carrying out the goal of the organization – “…to see downtown Wilmington become the culturally vibrant and economically prosperous center of the southeast region, and to be recognized nationally for its outstanding quality of life.”

Childs is no stranger to North Carolina and all it offers residents and visitors. “I am actually back in North Carolina for a third time, having been born in Fayetteville while my dad was at Ft. Bragg, and then later returning to the state for college,” says Holly. “I studied economics for way too long at Wake Forest University, West Virginia University, and Oregon State University before deciding it was time to make my own economic impact – and am intensely passionate about creating jobs and investment through community and economic development.”

She brings to the region twenty-five years of economic development experience and has been on a world tour that has included stopovers in Sacramento, Pittsburgh, Cincinnati, Phoenix, Columbus, and Nagoya, Japan.

Now that Wilmington is home for Childs, she knew she could make an impact in the way in which the area developed. Wilmington is an unbelievable city – amazing people, beautiful beaches, a growing tech, and entrepreneurial ecosystem, great breweries, and restaurants, and just a cool downtown vibe, Holly says.

“It’s really no wonder that a United Van Lines study earlier this year named Wilmington the number one inbound destination for 2020,” Childs says. “What’s not to love about Wilmington?”

Childs’s role as president of Wilmington Downtown Inc. is to carry out its mission of promoting economic growth and development of the downtown Wilmington area.

“WDI has been around since 1977 and has gone through many evolutions since then,” says Holly. “We need to always be ready to change and grow. I feel incredibly blessed to be here in Wilmington, and I can personally assure everyone that WDI is actively working to make this downtown the best it can possibly be; not just for some of the people, but for all of the people.”

According to Childs, the best thing to do for those interested in learning more and being a part of the changes that will take place as the area develops further is to be engaged.

“Care about our downtown,” says Childs. “Get involved with things that are going on downtown that you feel passionate about – parks, performing arts, the Riverwalk, and supporting local businesses.”

WHAT IS WILMINGTON DOWNTOWN INC. (WDI)?

“We are the lead economic development organization for downtown Wilmington. If there is something that affects our growth and development downtown, you can bet that WDI is somehow involved in it.”

WHAT IS YOUR ROLE AS PRESIDENT, AND WHAT LED YOU TO THAT POSITION?

“As president, I am charged with carrying out the mission of the organization, which is ‘to promote the economic growth and development of downtown Wilmington, North Carolina.’ I have a long career of working in public, private, and nonprofit leadership roles that are centered around real estate development, capital investment, and job creation – these are my passions. The board leadership for WDI is phenomenal and made it very clear to me that these are key areas that they wanted WDI to focus on in the future. So, I’m all in with them.”

ARE THERE ANY ADDITIONS, CHANGES, OR PROPOSALS YOU PLAN TO MAKE AS PRESIDENT?

“While WDI has a rich history, we are ready to make changes to reflect what Wilmington is now and where we are headed. We aren’t going to produce concerts anymore to bring people downtown for fifteen nights a year. We are going to instead focus on two areas to transform our downtown every day, catalyzing large projects – like Project Grace – and supporting small businesses through initiatives like our new Microloan Program.”

HOW DO YOU FEEL WDI IS MAKING A DIFFERENCE?

“We are creating the future of our downtown, whether in daily interactions with our downtown businesses through our Municipal Services District (MSD) Ambassador program or advocating for the expansion of public transit – we are hyper-focused on only undertaking initiatives if they make a difference.”

WHAT IS YOUR HOPE FOR THE FUTURE OF THIS ORGANIZATION?

“I want WDI to come into its own as an organization that pushes the boundaries – both literally and figuratively – of downtown. Our downtown is so much more than the Central Business District. We need to create more opportunities within both our core and our emerging districts and be known as a downtown that offers economic prosperity to all of our citizens. I want WDI to be radically inclusive and progressive – the heartbeat of a diverse and dynamic downtown.”