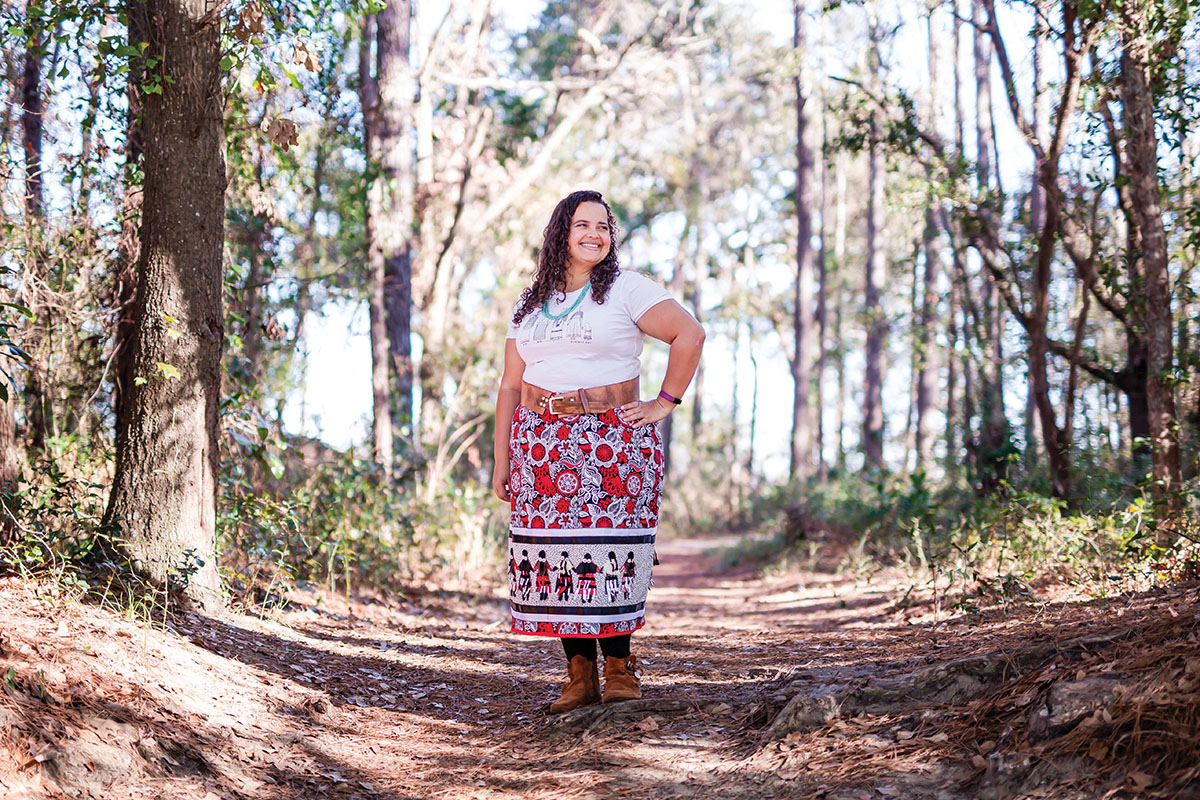 As a Native American woman who has forged a career in STEM (science, technology, engineering, and math), ASHLEY LOMBOY can be called a trailblazer. Lomboy, who is a global information security manager at Corning Incorporated and a member of the Waccamaw Siouan Tribe, has thrived in the STEM world. Now she is working to open that world to Waccamaw Siouan youths.

Lomboy had limited exposure to computers as a student in Columbus County, NC.  However, she worked with computers while in the military, and after leaving the armed services Lomboy earned a bachelor’s degree in computer science at Saint Martin’s University. Lomboy’s career has taken her all over the world, and she has held prestigious positions with Fortune 500 companies such as Boeing and General Dynamics Information Technology. However, home called, and in 2016 she moved to Brunswick County to be close to her family and tribal community.

Lomboy founded the STEM club, STEM Studio, when her children became interested in robotics. Through it, children, as well as their parents, have learned about and understood the value of STEM.

“There’s not a lot of jobs in computers in the local community,” says Lomboy. “You can’t be what you can’t see. We want tribal members to see people from our tribe who are successful in STEM careers. When they see that, it changes the trajectory of our youth.”

Since its inception in 2020, STEM Studio has provided a range of activities for tribal students. The club sent nearly 190 age-appropriate STEM kits to tribal youths in North Carolina, New Jersey, Florida, and Tennessee; held STEM career exploration events; and, in conjunction with the North Carolina Wildlife Resources Commission, hosted the first Annual Community Yucunne (Fish) Camp. Another project, which is ongoing, is the club’s Star Preservation Project. Through it, tribal members’ history is recorded.

STEM Studio’s upcoming activities include the Build a Wigwam Virtual STEM Competition; Native Talk, which highlights tribal members who are in STEM professions; and the second Annual Community Yucunne Camp. This year, as in the past year, the club will give scholarships and prizes to tribal youth.

When developing STEM Studio, Lomboy ensured the club adhered to tribal principles and met the needs of the Waccamaw Siouan community. She located the club on tribal grounds so it is easily accessible to children and their parents, and she surveyed the tribe to learn what types of STEM activities were important to families. Lomboy also made the club’s programs flexible; youths can choose which projects they want to participate in. Finally, STEM Studio gives back to the community by doing business with tribal members such as renting space or purchasing supplies.

STEM Studio has gained wide support throughout the area. It has partnerships with, among others, Island Wildlife-Cape Fear Region, N.C. Wildlife Resources Commission, and University of North Carolina Wilmington. In addition, professionals from numerous industries have contacted Lomboy to offer their assistance.

STEM Studio is just one of Lomboy’s many volunteer activities. She is also a Native American Ambassador and serves on the boards of local and national organizations.

Lomboy says her involvement in so many organizations is simply a reflection of who she is.

“I really enjoy helping people in whatever capacity I can,” Lomboy says.

“I was introduced to computers in middle school and worked with them when I was in the military. Those experiences piqued my curiosity, and I decided to get my bachelor’s degree in computer science and my master’s degree in cybersecurity. There’s a depth to computing that’s untouchable, and I’m always advancing.”

WHY IS A STEM CLUB SPECIFICALLY GEARED TO WACCAMAW SIOUAN STUDENTS NEEDED?

“It helps broaden their spectrum of what is possible. We want tribal people to see that Waccamaw Siouans are successful in STEM careers. When they see that, it changes the trajectory of our youth.”

WHAT TYPES OF PROJECTS DO THE STUDENTS WORK ON IN STEM STUDIO? “Our projects include those that individual students can complete, such as at-home learning kits and our upcoming wigwam building challenge, as well as those that involve the community. Examples include increasing our tribal youths’ access to UNCW’s Marine Biology Summer Program; the Yacunne (Fish) Community Camp; and the Star Preservation Project, an ongoing project in which the tribe ensures its heritage is saved.”

WHAT SPECIAL CONSIDERATIONS WERE INVOLVED WHEN SETTING UP STEM STUDIO FOR THE TRIBAL COMMUNITY?

“We have principles we stand by when working with the tribal community. One is to make the program easy for tribal youth to attend in person, so STEM Studio had to be geographically accessible. It’s also important to us to give back to the community, so STEM Studio does business with tribal members such as renting space or purchasing supplies from them.”

YOU ALSO VOLUNTEER WITH NUMEROUS OTHER ORGANIZATIONS. WHY IS THAT IMPORTANT TO YOU?

“I really enjoy helping people in whatever capacity I can. Also, it’s important to tell others about Native people, to let them know we are here, and to ensure we won’t be left out.”