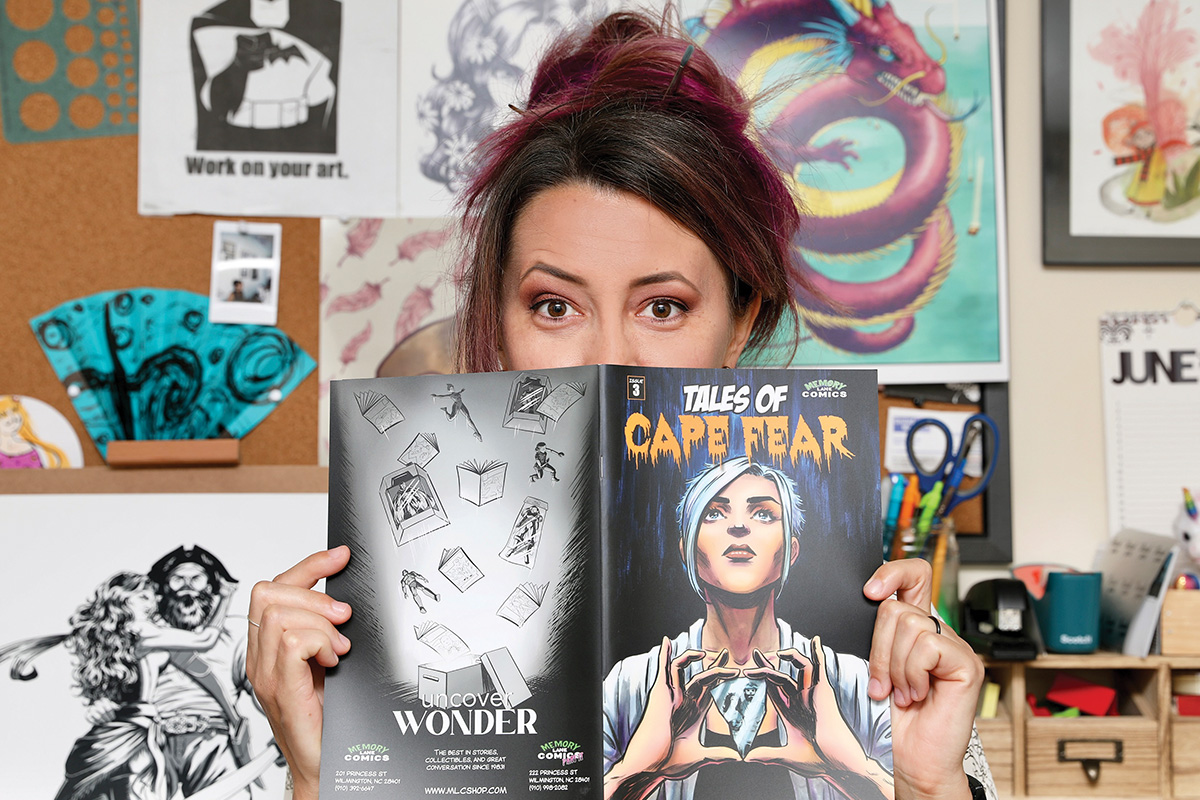 If you were to ever meet ANGELA FERNOT, sitting behind a table scattered with comic book art, you would likely notice three things right off the bat:

Fernot is the editor-in-chief/art director of a local comic book series, Tales of Cape Fear. A talented comic artist herself, she knows that commitment to artistic vision can sometimes leave one’s head in the clouds. For Tales of Cape Fear, Fernot has effectively wrangled a team of artists, designers, writers, and editors to create an incredible and unique storytelling opportunity in Wilmington.

For Fernot, art was always an interest, even in the times in her life she wasn’t sure how, or if, she’d find a way to morph that interest into a career.

“Art never came to me as easily as it did other individuals,” she says. “I have had to fight tooth and nail for every step of the way, every level of improvement that I have made. My talent is not ‘I’m just good at this,’ it’s perseverance.”

That perseverance is what has not only allowed Fernot to make a name for herself on the comic book circuit, but to create something truly unique for the city of Wilmington in Tales of Cape Fear. The soon-to-be-four-issue comic book series is an innovative, witty, and visually captivating way to see the port city.

Fernot is now using that persevering talent to look forward and establish a future way for local artists, of all ages, to find their own creative place and footing in the community.

“Whether it’s kids or adults, anyone who feels like they have a knack for creating art and selling it as a business, but they don’t know where to start — we want to be able to step into that role and provide that,” Fernot says. “These artists I’ve been surrounded by while working on Tales of Cape Fear are an extension of my family. I see the things that they are capable of, and I want to help open doors for them. I want to open the door and then I want them to kick it down.”

HOW DID YOU GET INTO COMICS? “I have always drawn and knew that art was going to be a part of my life. I just wasn’t sure how big of a part. By the time I was in middle school, a friend of mine introduced me to manga, or Japanese comics. And I was like, ‘This is it.’”

WHAT DID THE EARLY STAGES OF YOUR CAREER LOOK LIKE? “First, I attended The Kubert School, which was founded in 1976 by Joe Kubert, one of the renowned comic artists of his time. … It’s a three-year trade school, and it was basically a boot camp for artists. It was great, but it was also a scary time because I remember seeing what my peers were doing and doubting if I was cut out for it. Also, our class had over thirty students, and only three of them were women, which was a good representation for the industry at the time. I just wasn’t sure what my career in art – or even my future – was going to look like.”

YOU MENTIONED BEING ONLY ONE OF THREE WOMEN IN YOUR CLASS AT KUBERT – WERE THERE ANY FEMALE INFLUENCES DURING THIS STAGE OF YOUR LIFE? “Right after graduation, yes. Her name is JEAN SCROCCO. She is the co-owner with her husband, Greg Hildebrandt, of an online art gallery. She represents artists and owned a publishing company in the eighties and nineties. … She’s an incredibly powerful woman, and I was the first female employee she hired at the art gallery. Naturally, I was like, ‘How do I be more like her?’ and it evolved into a deeply meaningful mentoring relationship. … It wasn’t until I stepped away from that business and moved to Wilmington that it became really clear what my purpose was.”

AND THAT IS … ? “Well I was at Memory Lane Comics one day, and I was talking to JAKE MONTSINGER, one of the owners, about the possibility of putting out a local comic. We started talking about it, and I honest to goodness don’t remember who said what first, but both of us were basically like, ‘Should we make a book?’ … With Jake’s trust and support, and the lessons I had learned working with Jean, I was fortunate enough to be the one to steer the ship that is Tales of Cape Fear.”

I KNOW THERE ARE THREE ISSUES OF TALES OF CAPE FEAR AVAILABLE NOW, BUT WHAT’S NEXT? “Well, in the immediate future it’s the fourth installment, which we are starting to work on now alongside our first zine. But one of the big elements of this project for me has been helping artists and shaping their growth. I want to stay in that space, maybe in a business capacity. Tales of Cape Fear is the way to raise awareness of who local artists are and what we’re doing, but I would love to develop some sort of entrepreneurship program.”

Correction: This version updates the spelling of Jean Scrocco’s name.