From textile design to yoga leader 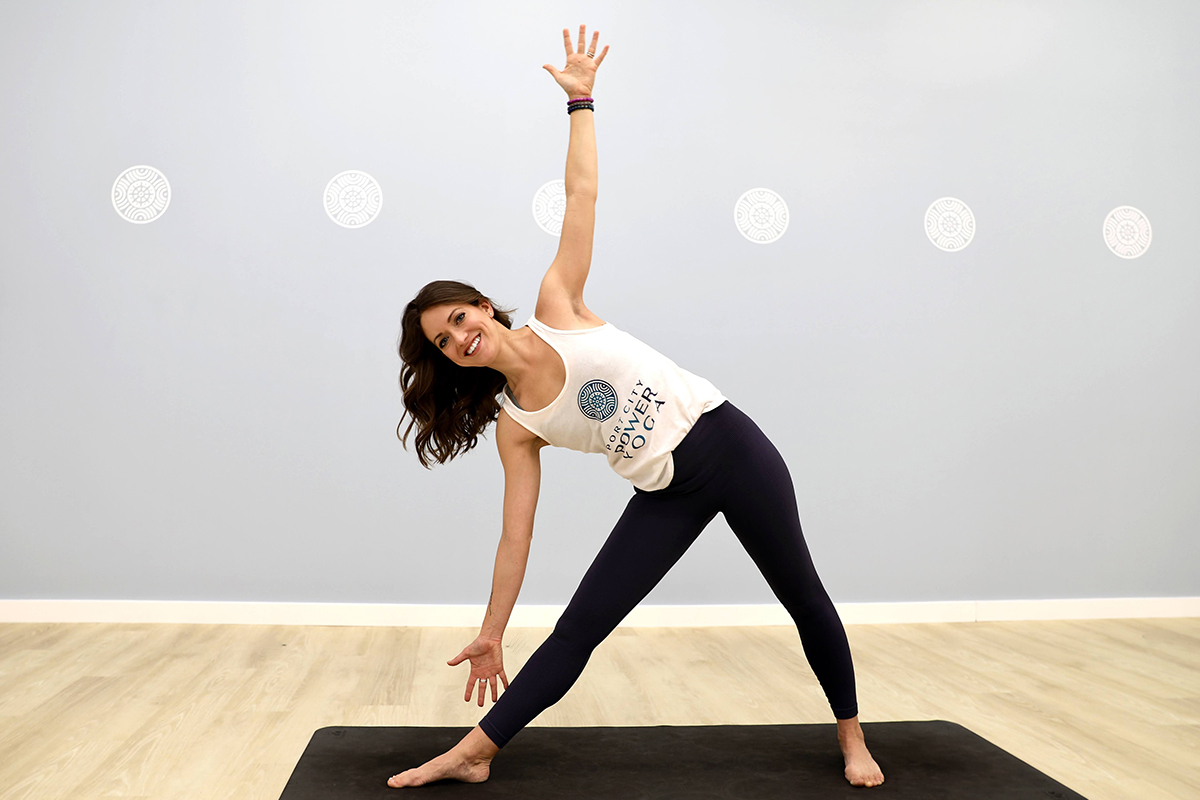 For some, yoga is a great workout. For KATELYN MAGINNES, owner of Port City Power Yoga, it’s that and more. Yoga is the means by which she transformed her life.

“I didn’t have a voice until I started my yoga practice,” Maginnes says. “Showing up, knowing who I am and what I want to be for the world and others comes from my practice of yoga.”

As a former dancer, movement has always been important to Maginnes. However, she left that part of her life behind when she started her professional career in textile design. Maginnes took up running, but her need to express herself through movement wasn’t filled until she stumbled into a yoga studio at the urging of a coworker.

Maginnes was hooked at the first class and immediately started training to teach yoga. She became a certified yoga teacher in 2016, and a certified Baptiste yoga leader in 2018.

Maginnes stresses that though Baptiste yoga classes are intense – you work hard – they are for everyone. And students of all levels take class together. Most importantly, Maginnes says that through the classes, students uncover their power, and she loves seeing the transformations her students experience.

“The practice will take you to your edge,” Maginnes says. “It’s physically challenging, but there is support and inspiration inside the room. As people become more experienced, they see where they started and how much they’ve progressed. People carry what they learn about themselves into their everyday lives.”

Such was the case for Maginnes.

It was through her Baptiste yoga practice that Maginnes realized that she wasn’t happy in her career, that she had no enthusiasm for her work.

Maginnes’ move to Wilmington in 2020 gave her the opportunity to change her life. As she had a new baby and wasn’t working, Maginnes decided it was the perfect time to teach yoga. That way she could do something she loved, and it would provide a way for her to meet people and make friends. Maginnes started giving classes outside at Wallace Park for free and soon had a following.

It wasn’t long before Maginnes’ husband suggested that she open her own yoga studio.

Though Maginnes had some initial doubts, things fell into place.

Maginnes quickly discovered the perfect space for a studio at 12 South 16th Street, just two blocks from her home, and her potential new landlord was more than welcoming. It got to a point where she couldn’t say no, Maginnes says.

As the idea of owning her own studio grew, so did Maginnes’ excitement.

“I was thrilled to bring positive energy to the space,” she says. “We were creating something beautiful in a place that wasn’t always positive.”

Then, things slowed down. Building the studio took time, and that tried Maginnes’ patience. To keep her impatience in check, Maginnes turned to yoga, explaining that she hasn’t yet mastered the ideal of the calm, controlled yogi.

“I’m a Type A perfectionist,” Maginnes says. “I practice yoga to calm down and bring ease into my life and to see the positive of whatever situation I’m in. You get better, but it’s still a practice.”

Since Maginnes opened her studio in November, she’s seen steady growth in the number of students. People come to try a class, then bring their friends, she says.

The studio has also fulfilled another of Maginnes’ dreams. It has become a community.

Currently, Maginnes holds one to three yoga classes a day in her studio, but she hopes to double or even triple that schedule. When the weather warms, she also plans to resume teaching classes outside so her students can enjoy the scenery.

Maginnes says she couldn’t be happier with the direction her life has taken, and she has no doubt that she has discovered her passion and purpose.

“I love teaching yoga,” she says. “I enjoy seeing the transformation in people, seeing their journey and the pride they have in the work they’ve done. I love when people come back to the studio because I know I’ve made a difference in their lives.”