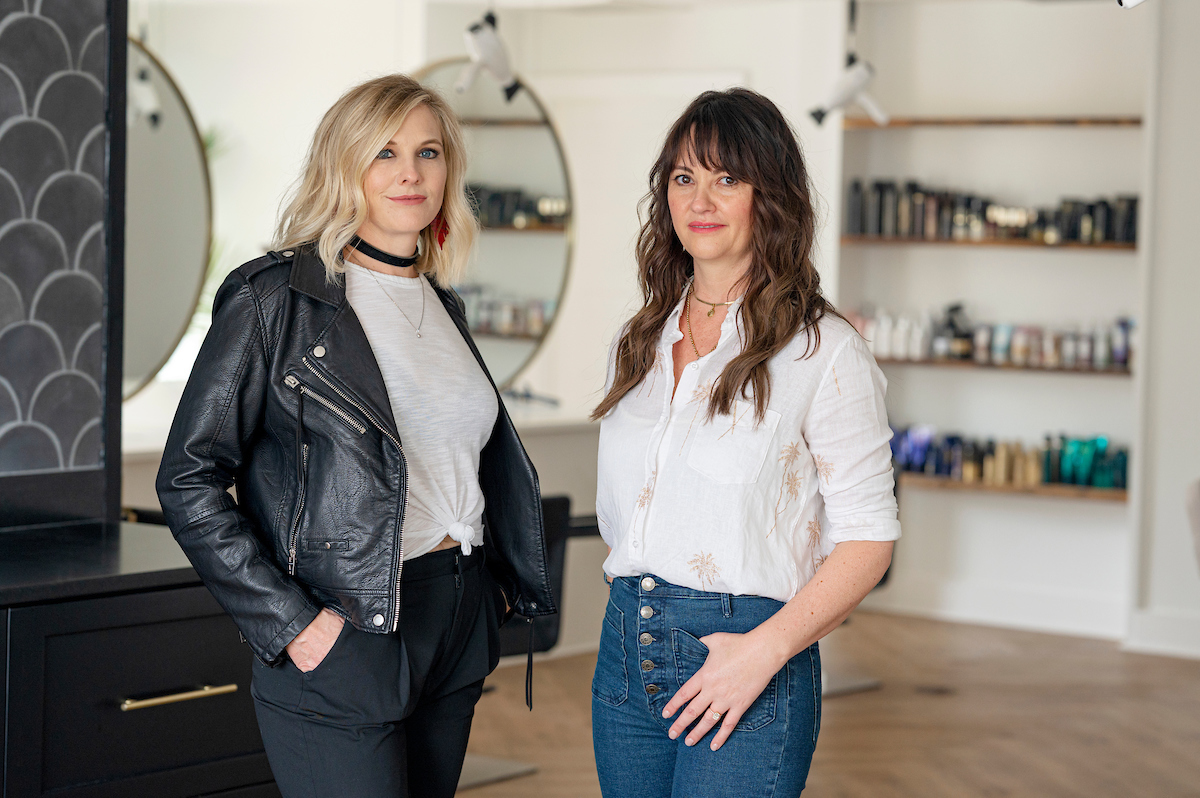 Just over three years ago, KELLIE CHAMBLISS (pictured left) and JOURNEE DAVIS (pictured right) decided to bring a bit of sunny southern France to Wilmington. The two experienced hairstylists opened their own establishment on Sir Tyler Drive and named it Tropez Salon, after the coastal town of Saint-Tropez, France.

Besides evoking the casual glamour of the Riviera in the services they offered, the women wanted the name to reflect the French techniques they employ.

“The style of cutting we do is French cutting,” Davis says, explaining that this technique is used on dry hair and starts at the top of the head, working down to shape the underlying layers to support the overall look, based on the way a client’s hair behaves.

Tropez Salon’s coloring techniques, from hand-painted balayage to highlighting, are French as well. French cuts and French coloring result in a look that’s very compatible with a beach lifestyle because it takes humidity and the hair’s natural texture into account, the two salon owners say.

Tropez Salon grew organically from the two women’s experience working in the same shop before stepping out on their own.

“We have the same work ethic and move at the same pace,” Davis says of her business partner. “I had always wanted to have a salon but didn’t want all the burden on myself. I approached her on this, and said, ‘Whenever you’re ready.’ She said, ‘Let’s do this!’ She wanted to jump right in.”

Despite feeling very comfortable in the salon where she and Davis were working, Chambliss says she was ready to take the plunge into entrepreneurship with her colleague, despite a busy home life that includes three children in each family.

“We complement each other well; we fit together like a puzzle,” Chambliss adds. “She’s strong where I’m weak, and vice versa.”

The two found a newly built space on the ground floor of Mayfaire Flats and proceeded to construct their vision, with a little help from their husbands.

Chambliss’ husband Yates Chambliss, an owner of Chambliss & Rabil Contractors, oversaw his company’s buildout of the space. Micah Davis, Journee Davis’s husband and chief marketing officer at Live Oak Bank, played an important role as well. In addition to helping with Tropez Salon’s website and marketing efforts, he started the women on a solid business footing.

“Micah worked with us on our business plan, including an exit plan, so there was no question as to how (the business) was going to work given any eventuality,” Davis says. “Kellie and I have this working relationship, which (makes) it easy to make business decisions. We’re not emotional about it.”

At the start of 2020, however, both women felt the business was running them ragged, Davis says. They were seeing costs outpace revenues, and they were tired.

Then came the pandemic, and it saved them.

“The six weeks we were completely shut down gave us time to think about the structure of the business,” Davis says. “We decided to completely restructure when we opened back up. We had four stylists; we didn’t really have enough space, we were not making any profit.

“We asked ourselves how we could redo this,” she continues. “We had been running just one shift, so we split the shifts, promoted two assistants to stylists, and hired five more people before we reopened.”

The owners knew that when salons were allowed to reopen, there would be a “massive rush” of people eager to get their hair done, Davis says.

“We prepared ourselves. We installed plexiglass everywhere. We added two more stations. Our first shift starts at 8 (a.m.) and goes to 2 (p.m.) The second goes from 2 to 8.”

The bold changes didn’t seem risky at all, because Chambliss and Davis knew the demand would be there. And those changes have paid off in doubled sales and a more manageable business.

One thing that has not changed, say the salon owners, is their culture. Unlike at most salons, the staff at Tropez are employees rather than independent contractors. A PPP loan last spring allowed the business to continue paying everyone, so there was a cohesive core to handle the reopening.

And perhaps most importantly, having employees rather than contractors helps Tropez retain stylists and maintain a cooperative rather than competitive culture.

“We don’t compete with each other for clients; we support each other,” Davis says. “I have passed off about 80% of my clients to others in the salon, and people are happy to go to them because they see how capable and happy they are.”

For employees who come in at the assistant or stylist level, there is potential for promotion as they gain skills and experience. Chambliss and Davis handle all the training, so their stylists produce the looks for which the salon is known.