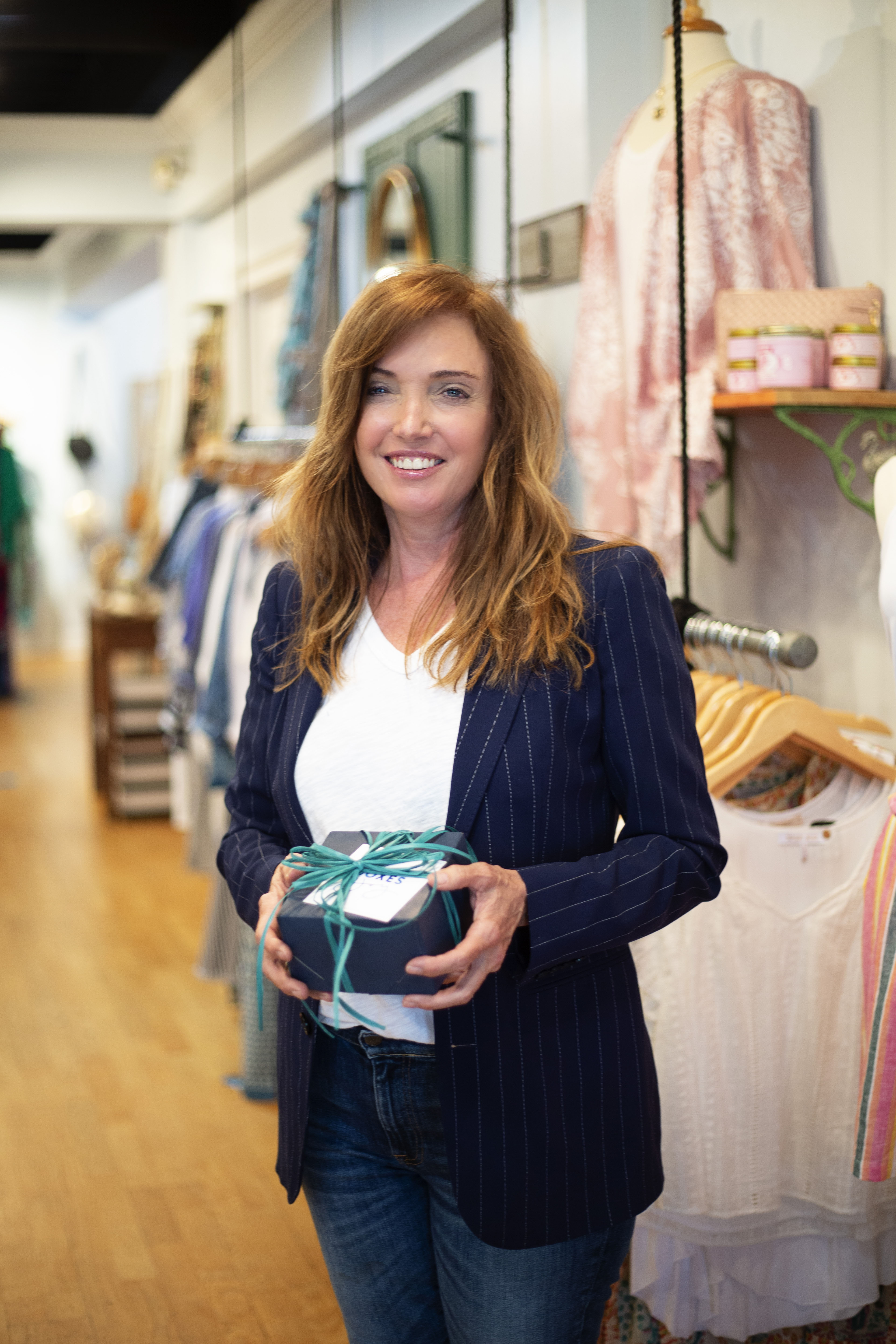 It’s said that good things come in small packages. A new Wilmington-based initiative is proving the truth of that old adage.

Little Boxes of Joy, started by friends ROBIN GRATHWOL and JULIE ROBINSON soon after COVID-19 concerns caused the shutdown of many businesses, aims to spread sunshine to essential workers as well as to local retailers, restaurants, and service providers.

The concept is simple: With donations, Grathwol (above) and Robinson purchase items and pack them in small boxes to give to people who are serving others during the COVID-19 pandemic. The mission, says Grathwol, a land developer, is to express gratitude to those frontline workers while supporting local small businesses, many of which have seen reduced revenues during virus-related restrictions.

“The base package, which we try to make gender neutral, includes hand cream, soap, and a sea-salt kind of candle. There’s also a carved wooden heart that has a memo-holder clip holding an inspirational quote,” Grathwol says. “Lately, we’ve been adding a comfortable, decorative mask in each box and sometimes hair ties.”

Then there are gift cards from coffee shops and service providers such as Cruisers Car Wash.

“There is a coffee shop gift card in each one,” Grathwol says. “We try to keep it regional. For employees at Pender Memorial Hospital, they get a gift card from a coffee shop right near the hospital.”

“David Long, director of spiritual care for NHRMC, was my contact. I asked him what he thought of the idea (of Little Boxes) and asked him if he could help identify needs. He has directed us up to this point,” she says.

Long helped the organization identify health care workers who might be overlooked, such as a hundred home health care nurses serving eight counties in the region.

“They are in (sick people’s) homes and are at risk, plus they are isolated and some have even had to distance themselves from their families,” Grathwol explains. “That was a good place to start. Then we expanded to Pender Memorial, which has a staff of 225. Also in Pender County, we provided boxes to prison nurses and health department clinical field workers.

More recently, the organization focused on employees of Lower Cape Fear LifeCare, which provides hospice services to seven counties in Southeastern North Carolina and to Horry County in South Carolina. Next, Grathwol and Robinson will turn their attention to employees at Wilmington International Airport.

There are about 300 employees at the airport: TSA staff, airline personnel, members of the New Hanover County Sheriff’s Office, retail staff, and rental car company employees.

Through Little Boxes’ website, littleboxesofjoy.org, people can nominate groups of frontline workers to be recognized. That’s where the idea of recognizing ILM workers came from. The website is also a portal for those who want to make a financial donation, become a corporate sponsor, or volunteer. Retailers who want to bring their products to Little Boxes’ attention can also communicate via the website; Grathwol notes that she is still looking for one more retailer for the ILM worker boxes.

Additional volunteers will help Little Boxes collect, pack, and distribute more quickly, Grathwol says, adding she does much of the development work since Robinson is busy managing her own business, Airlie Moon. To date, the women have involved a church youth group as well as families in their Wrightsville Beach neighborhood to assemble the boxes. Now, Grathwol is contacting Scout troops and figuring out how to stage operations outside with social distancing so volunteers feel comfortable.

Little Boxes of Joy is not just a way of giving to the community and boosting the morale of stressed-out personnel. Grathwol also sees it as her way of giving back.

“Back in the last recession, I was hit hard and barely survived, along with fellow developers,” she says, recalling how area sewer system problems led to a three-year development moratorium in the early 2000s. That shutdown was followed by the Great Recession, which put many developers out of business.

“Boy, do I understand what this (business downturn) is like,” she says and adds that her first calls for corporate support of Little Boxes of Joy were to her colleagues in the region’s real estate development industry because they would identify with tough economic times for small businesses and understand the need to support them.

Looking ahead, Little Boxes’ founders are putting together short videos to tell the story of what their organization has accomplished. They hope to use the videos to attract more corporation sponsors and, ultimately, to replicate their initiative in other cities across the country.

Correction: This version of the story includes the name of a local retailer of the decorative masks and hair ties Little Boxes of Joy includes in its packages, and corrects the country of origin of the products.