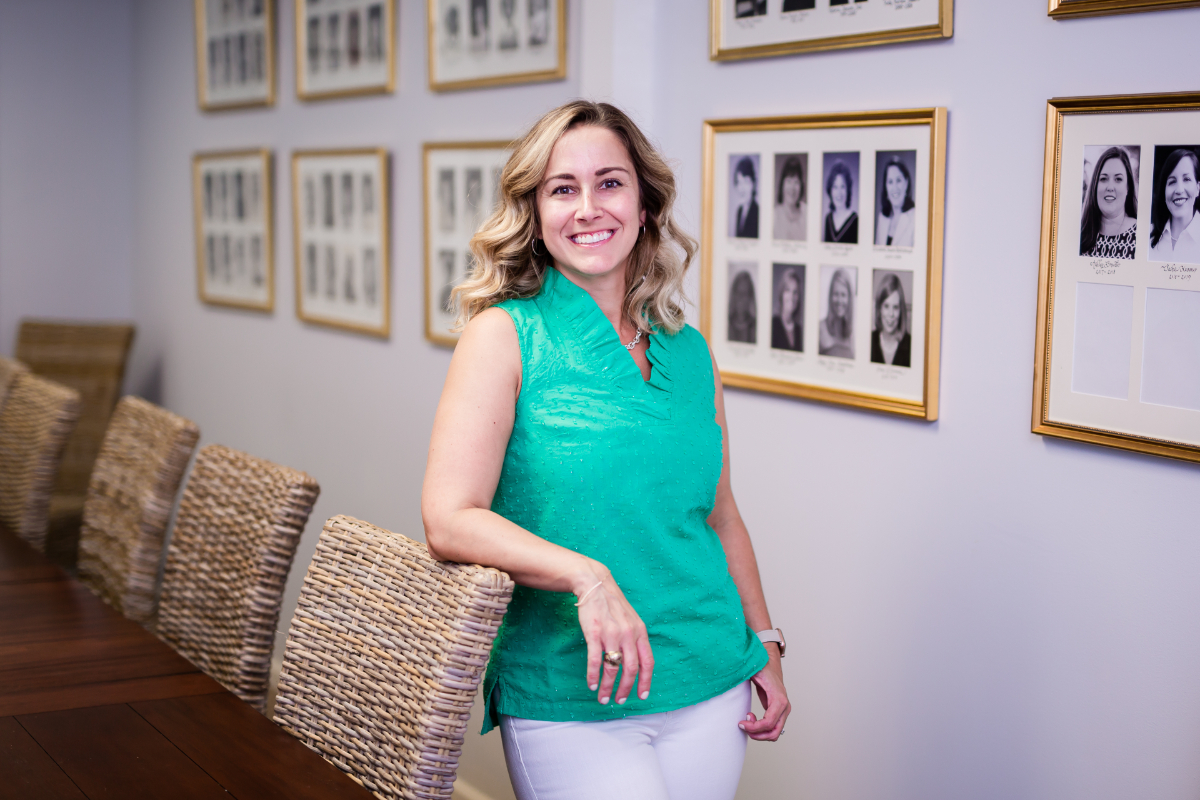 Junior League of Wilmington NC President MADELINE SCHILDWACHTER has a unique perspective of leadership, having attended an all-girls high school and a predominantly male college.

“These formative experiences, combined, really solidified how I look at the world,” Schildwachter says. “Leading with integrity when it comes to building and maintaining relationships, especially with other women, but then also how to lead by learning and doing and delegating and empowering other people around me.”

In high school, the young women assumed they would be called on and earn leadership roles, she says, adding her college experience at The Citadel was different and building relationships with other women was more challenging.

“The competition was there, and so you had to be more intentional to make these bridges with other women,” Schildwachter says, noting the women had different ways of leading and making their seats at the table and, “Nobody was wrong.”

Schildwachter now helps empower other women to be leaders through the Junior League of Wilmington, an all-women organization where members use their leadership skills and talents to work in the community. The organization celebrates its 70th anniversary this year.

“We work with the model that every member is a leader, and every member can make her leadership experience what she wants it to be,” Schildwachter says. “We’re encouraging them to bring issues they are seeing that are important to them.”

Schildwachter, who also has a law degree from the University of Massachusetts, moved to Sneads Ferry in 2011 while her husband, Drew, was on active duty in the U.S. Marine Corps. She joined the Junior League in 2014, and the family moved to Wilmington in 2016.

“Part of the appeal with the Junior League was it was professional, passionate women,” Schildwachter says. “I was looking for something I could do that was more than just a superficial networking opportunity.”

Schildwachter, a mother of three, has worked in fundraising donor development and taught graduate courses in education law. At the Junior League, she has chaired a fundraising event and community project, served as secretary of the board of directors and executive vice president, and led a Diversity, Equity & Inclusion Task Force.

The Junior League of Wilmington was founded on Sept. 30, 1952. The charity organization is planning several activities this fall, including an anniversary celebration fundraiser Sept. 30 at the City Club of Wilmington.

Volunteer members are reconnecting with organizations the Junior League helped establish during its history, including DREAMS Center for Arts Education, the Children’s Museum of Wilmington, and The Carousel Center.

Community issues include supporting Five14 Revolution and A Safe Place in providing supplies and clothing for survivors of human trafficking, helping feed hungry children through NourishNC’s Backpack Program, and learning from Plastic Ocean Project about the dangers of ocean pollution.

The Junior League has about 90 active volunteer members, as well as two part-time staff members who serve as bookkeepers and office administrators, Schildwachter says.

“We have a really diverse membership as far as the composition,” Schildwachter says. “We’ve got social workers, attorneys, teachers, business owners, content creators, pharmacists, engineers, and so we are all throughout town, in a literal sense and a figurative sense.”

“We welcome any women who wants to be a civic leader and to volunteer some more and to network and improve our community,” Schildwachter says.

The Junior League fundraises money with events such as its Bargain Sale and Touch-a-Truck programs, applies for grant funding, and looks for sponsors. Members recently have raised about $30,000 a year, Schildwachter says.

During its years of service to the Wilmington community, the organization has provided more than $1 million and 10,000 volunteer hours, according to the Junior League’s website.

Anyone interested in joining the Junior League as a member, becoming a sponsor, or buying a ticket for the 70th anniversary celebration can visit the website.