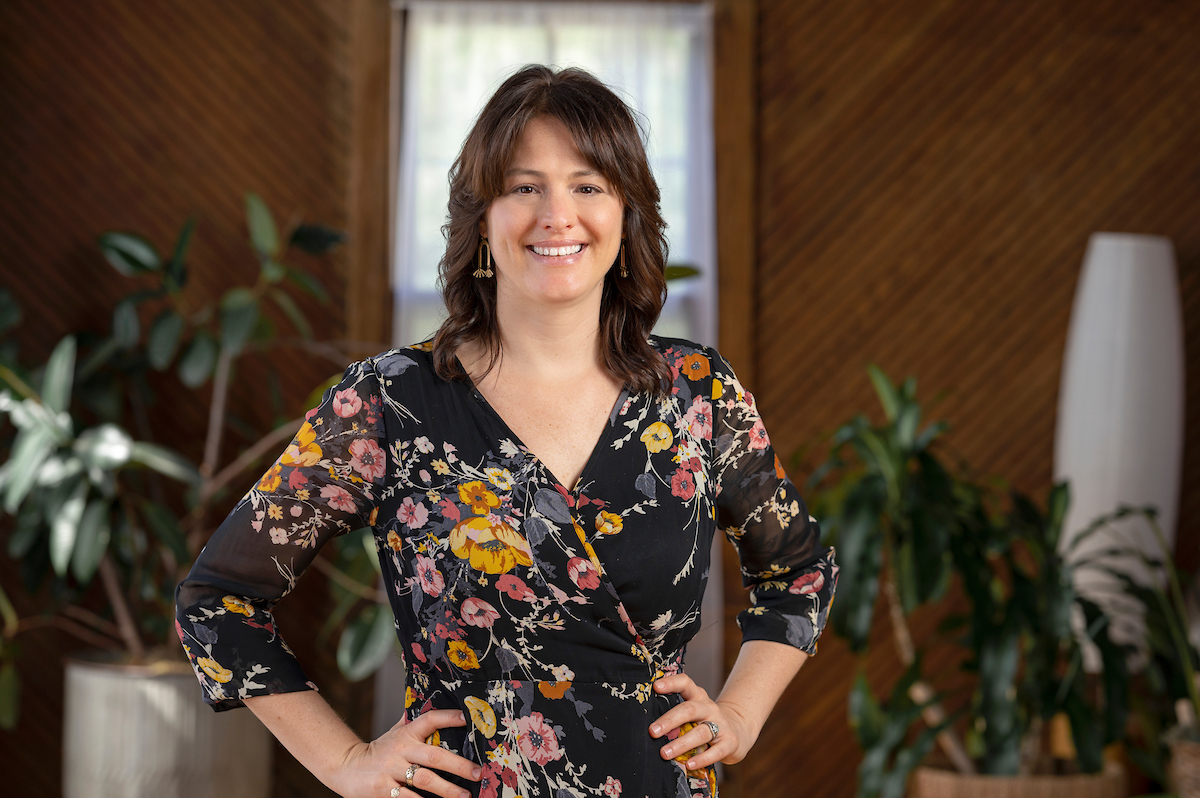 The moment you open the big red doors to terra sol sanctuary on Castle Street you know you are in a very special place. Owner ALEXIS ABBATE says “It’s a place of community and love. When you walk in, you can immediately feel the welcoming energy of the building.”

Originally a church serving the Baptist congregation for nearly a century, the building changed hands in 1992 becoming St. Jude’s Metropolitan Community Church. Eventually, it became an antique shop for a local collector. In August 2016, the church was discovered by REBECCA NIAMTU and JACKIE DECONTI who established terra sol sanctuary, a yoga studio and event space. Abbate became sole proprietor in 2019.

In her younger years, Abbate’s family lived near Charleston, South Carolina where she fell in love with the southern way of life. They moved to just outside New York City when Abbate was ten.

“New York was a great place to grow up, a melting pot of diversity and culture,” she says. “The best way to learn is to be in it and I was fortunate to have been around so many different types of people.”

Abbate attended Binghamton University in New York to study sociology and human development. It was here that Abbate first practiced yoga in an alternative medicine class. She tucked that experience away and in 2004 headed south again for a position with Verizon in Wilmington.

After ten years in the corporate environment, Abbate hit her breaking point. “The position provided financial stability, health insurance, a 401K plan. All the things I thought I was supposed to have. I grew up with the notion that you work now and play later. But I was very unhappy.”

Abbate thought a lot about her happier days, growing actively playing sports, something now missing in her life. In 2015, Abbate’s aunt took her to yoga class. Abbate recalls, “I had an emotional release. It was a monumental moment.”

One year later, Abbate took a 30-day 200-hour intensive “Yoga for the Planet” program for instructors at Salty Dog Yoga and Surf in Carolina Beach taught by Niamtu and DeConti.

Afterwards, DeConti asked her to take over the Sunday morning pay-what-you-can yoga class. “My first reaction was no way. I can’t do that.” Public speaking frightened her. Digging deep, Abbate said yes.

Taking six months off from her corporate position, Abbate continued to gain experience teaching where she could, at pop-up yoga clinics and even for her mom’s neighbors. But feeling financial pressure, Abbate updated her resume. Unexpectedly, Niamtu and DeConti asked Abbate to start a business with them. And again, she said yes. “I’m doing this. It just feels right.”

Abbate was tasked with the business side of terra sol, setting up the legal entity, utilities, and logistics. “I didn’t really know much about the business of yoga, so I stuck with what I learned in the corporate world,” she says.

Eventually, both Niamtu and DeConti decided to pursue other interests, leaving Abbate as sole owner of terra sol sanctuary. The studio offers many types of classes, including Hatha, Vinyasa, power and beginners. There is something for everyone from those just starting to multi-year practitioners.

“This journey has been amazing. Yoga philosophy and practice inspire me to learn, grow and explore what it’s like to be a human being,” Abbate says. “To experience life in its entirety, both the light and the dark. And terra sol sanctuary is a safe space for the community to get to know themselves on a deeper level.”

About success, she adds, “Anyone who can dream and is willing to work hard can be successful. I’m so grateful.”