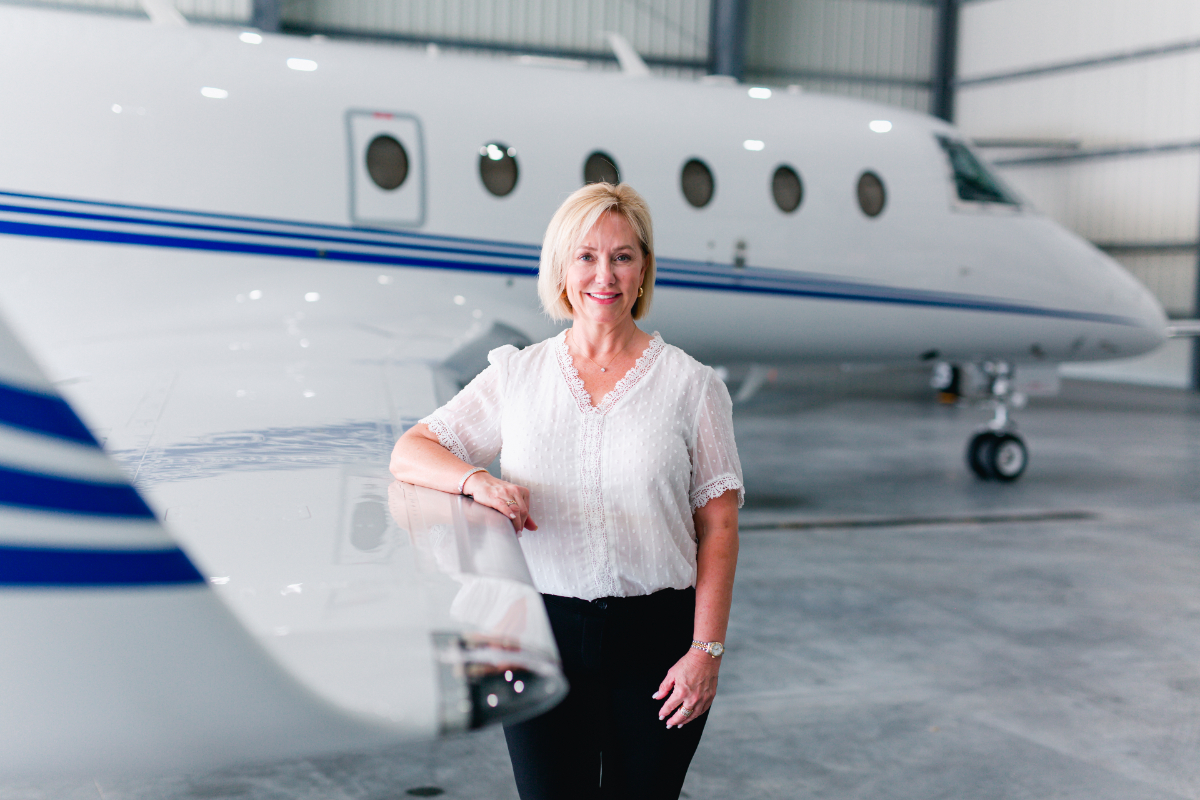 SANDRA SPALLER is ready for takeoff, that is, in her role as the general manager of the newly opened Wilmington Aero Center. Offered the position in January, she “never thought there would be such an opportunity available in the Wilmington area.”

Plans had been in the works to open an Aero Center in Wilmington. All physical space was completed in July, and the company officially landed in the area with a soft opening in June. With locations in Florida and Washington state, Aero Center caters to private, corporate, and general aviation customers. It is like having your own slip or dock for your plane with services such as fueling, hangaring, tie-down, and parking.

Spaller felt “the stars had aligned” when offered the job. She first caught the aviation bug in 1988 while working as a customer service representative for Air Wilmington while a student at the University of North Carolina Wilmington. She was promoted into the accounting department and eventually became CFO. Her thirty-year career with Air Wilmington ended in 2018 when the FBO was sold.

After taking some time off trying to figure out next steps, Spaller worked as a surgery scheduler, which she admits “was a far stretch from the aviation industry.” Luckily, she heard about the opening at the Aero Center at the end of 2021. As the general manager, she is ready for the challenge of growing the business and making it a part of the local and national aviation scene.

“I look forward to bringing competitive, full-service FBO offerings and a customer-centric experience to Wilmington,” she says. “Through my leadership, we will reveal the hidden gem that is the Carolina coast and The Port City.”

Spaller views the recent renovations happening at Wilmington International Airport as a benefit and a chance to return it to its former glory.

This next phase in her career feels natural to Spaller. “The welcome I have received from old and new aviation friends has been truly gratifying,” she says. Spaller plans on using her thirty years at Air Wilmington as a foundation for expanding her professional relationships while propelling the company forward. Making a presence in the local community is also on her list.

“We have initiated an aggressive marketing plan that introduces Aero Center Wilmington to the local and national aviation community,” she says. The Aero Center recently hosted an Aviation Career Education (ACE) Academy. Cape Fear Community College, along with Williston Middle School students, toured the airfield and airport, participated in a drone scavenger hunt, toured aircraft, learned about aircraft rescue firefighting, aircraft maintenance, and about being a pilot.

Guests also learned about the different types of aviation such as commercial, business, and general aviation. “It was a great day informing the next generation about aviation,” she says.

Referring to herself as a “home-grown aviation enthusiast,” Spaller was born and grew up in Wilmington. Having raised her two boys here, she “can’t think of anywhere else she would rather live. The chance to grow this business and this aviation community is truly awe-inspiring,” she says.