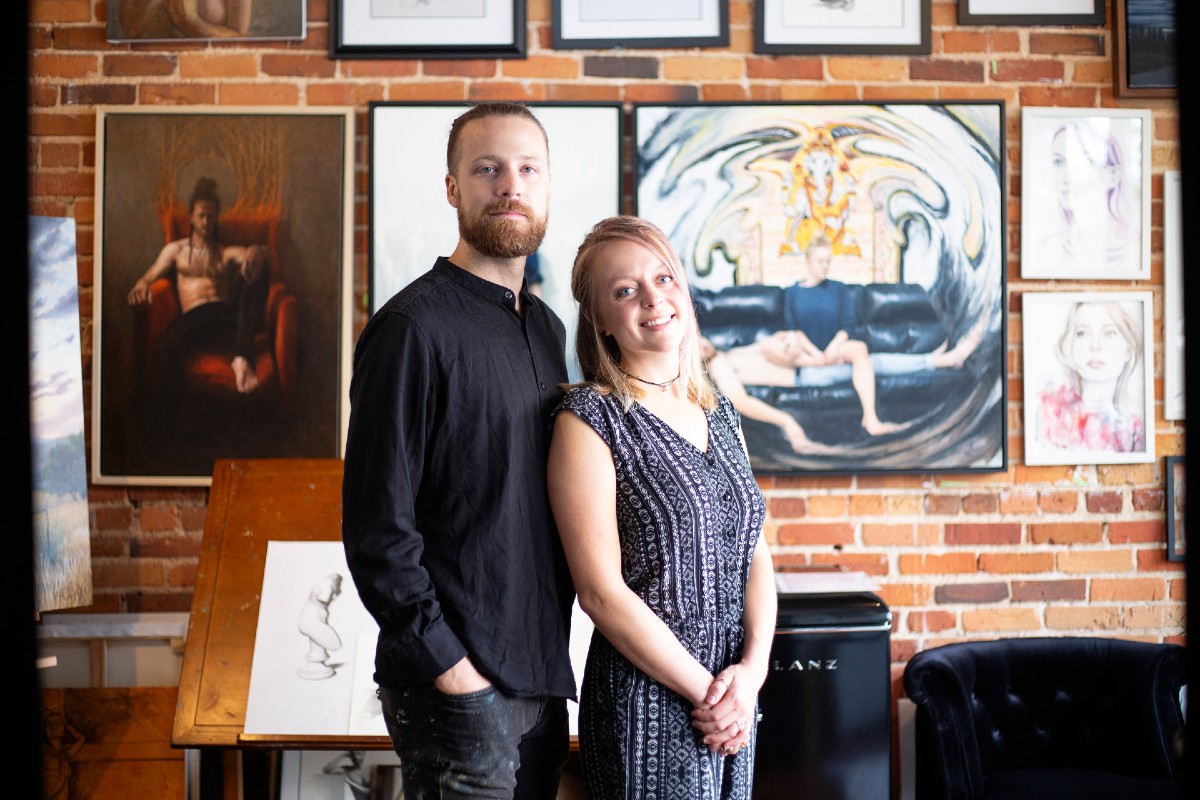 ERIKA EDWARDS and Danny Starr are bringing some added excitement to downtown Wilmington by mixing the traditional with the youthful at their new art gallery and studio. The duo opened Valhalla Gallery Art at 112 Market Street in mid-summer and the couple is aiming to bring a new flare to the art experience.

“We are both artists, with different backgrounds,” says Edwards, who hails from Chapel Hill.

There is no question, the two are busy. Starr is a classically trained oil painter who serves as Valhalla’s residing artist as well as a graphic designer, while Edwards does double duty serving as creative media director for Honey Head Films with her business partner, KRISTI RAY.

The idea to open the galley came from strolls around downtown, they said.

“We would walk around downtown and look at different locales and kind of dream of the opportunity to try our hands as art curators,” says Starr.

He laughs as he says that he got that opportunity and more; with the busy Market Street storefront, he sometimes feels like a performing artist.

“Sometimes people stop at the window and watch me as I work. It’s a great feeling,” he says, adding that people seem to be drawn to the studio because it does have a storefront window.

Edwards, who graduated from UNC-Chapel Hill with a degree in theatre and film production says that entrepreneurship runs in her blood and as the COVID-19 storm eventually passes by, she would like to add events to the studio.

She would eventually like to see the gallery have speakeasy art nights as well as “Friday Pop up Artist” events, and the addition of musical events at Valhalla.

“There are people who thought we were nuts for opening during a pandemic, but we have amazing plans,” says Edwards.

Both Edwards and Starr felt very brave opening during the COVID-19 crisis and look forward to hosting art events at the locale once the pandemic is over.

She says they chose the name “Valhalla” as it is known from Norse mythology as a majestic, enormous hall “where the brave live forever.”

While being artists and sharing a love of art is what led to opening Valhalla, Edwards says that the two have another significant reason for opening the studio.

“We felt like we knew so many artists who may have an online presence, but do not have a brick-and-mortar place to showcase and sell their work,” she says.

Both are passionate about providing opportunities for artists to have a space to display their art. Currently, the gallery has five artist’s work on display.

“It takes courage to be an artist. It’s hard to make a living but it’s easy when you have a community of supporters,” says Starr.

Starr and Edwards are engaged and plan to marry in 2021. The couple feels that while their mediums as artists are different, that brings them together even more.

“We inspire each other. What we do, my film, his oil painting are shared endeavors. It brings excitement,” Edward says.

Starr adds, “Our shared work is something that bonds us even closer.”