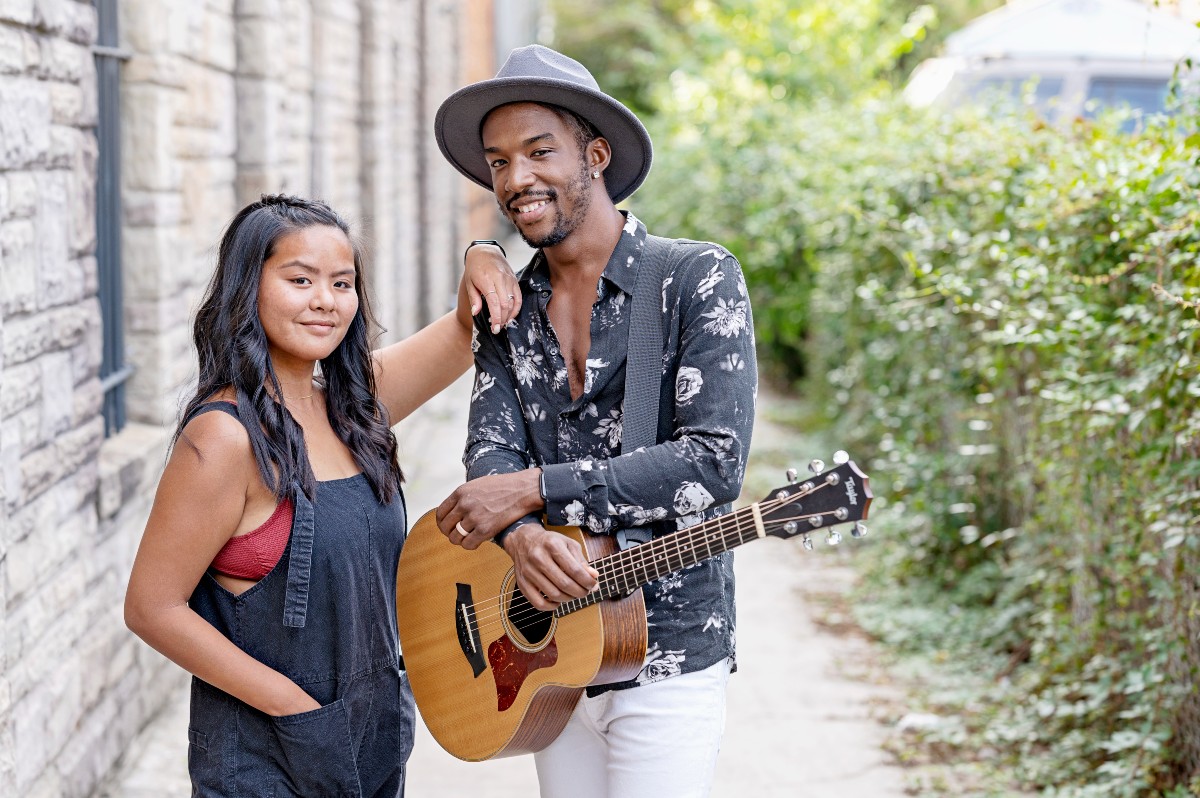 CASSIE GRAE is one half of the band, The Graes. The other half includes her husband, CJ GRAE. The husband-wife duo entered the Wilmington music scene almost over a year ago and are known for their folk-pop music. But they hate to have any kind of label.

“We go from pop, to folk, to country, to gospel/Christian-alternative, to classic rock, to classical in a matter of a few minutes,” Cassie Grae says. “We’re like a shuffle playlist.”

Their wedding day, which was a little over a year ago, not only bound them as a couple but also as an official duo.

“The night before our wedding we set up a new Instagram, Facebook, email account, website, and had all the things ready for our first release,” says Cassie Grae. They performed “40 Years” (their vows) on their wedding day and it was their first official song, release, and performance together. Since arriving in Wilmington, they have jumped right into the music scene.

“It’s connected us with some of the sweetest, coolest people, each with their own incredible story,” she says.

They tossed around names of places to live before they got married. “We knew we wanted to try something new,” Cassie Grae says. “I grew up in the same area and CJ bounced around from city to city. Oddly enough, we both individually once said we wanted to live in North Carolina.”

The Graes both have had a love of music since childhood.

“Music was always in me,” Cassie Grae says. “I can’t remember exactly how it started, but one of the first memories I have is of me and this old guitar that my parents had in the attic.”

From there she remembers being surrounded by music. “Between my dad’s love for vinyl and rock ‘n roll and my mom’s experience singing with her sisters, music was all around.”

One of CJ Grae’s first memories was with the drum. “I was about four, or maybe even five, the first time I sat behind a drum set, and I felt right at home,” he says. Their passion for music continued to grow and develop individually. Cassie Grae sang in a middle school chorus and a church choir while battling stage fright, and he played many instruments in different bands from his later teen years into his early 20s.

The duo has spent the last year trying to discover their sound.

“We’re really influenced by a hodgepodge of artists such as Johnnyswim, Ed Sheeran, and Jon Bellion,” she says. They each bring a different aspect to the band based on their background.

“As a drummer, CJ loves a captivating rhythm and the way one can share the highs and lows of life in a way that’s catchy and gets stuck in your head,” says Cassie. “I come from a deep appreciation of acoustic composition with a great walk-down and a strong string piece.”

The duo recently released their single Love Again, complemented by a music video.

Avoiding having their music defined, Cassie says, “We always chuckle and laugh and say, ‘We’re just The Graes.’ We’ll write something super pop-heavy, and the next song will be really inspired by the earthy folk elements,” she says. “I don’t think we’ll ever fit into this picture-perfect standard for any genre, and that’s what makes us, us.”