Laughing All The Way

Stand up comedian Alli Coleman says comedy is about creativity 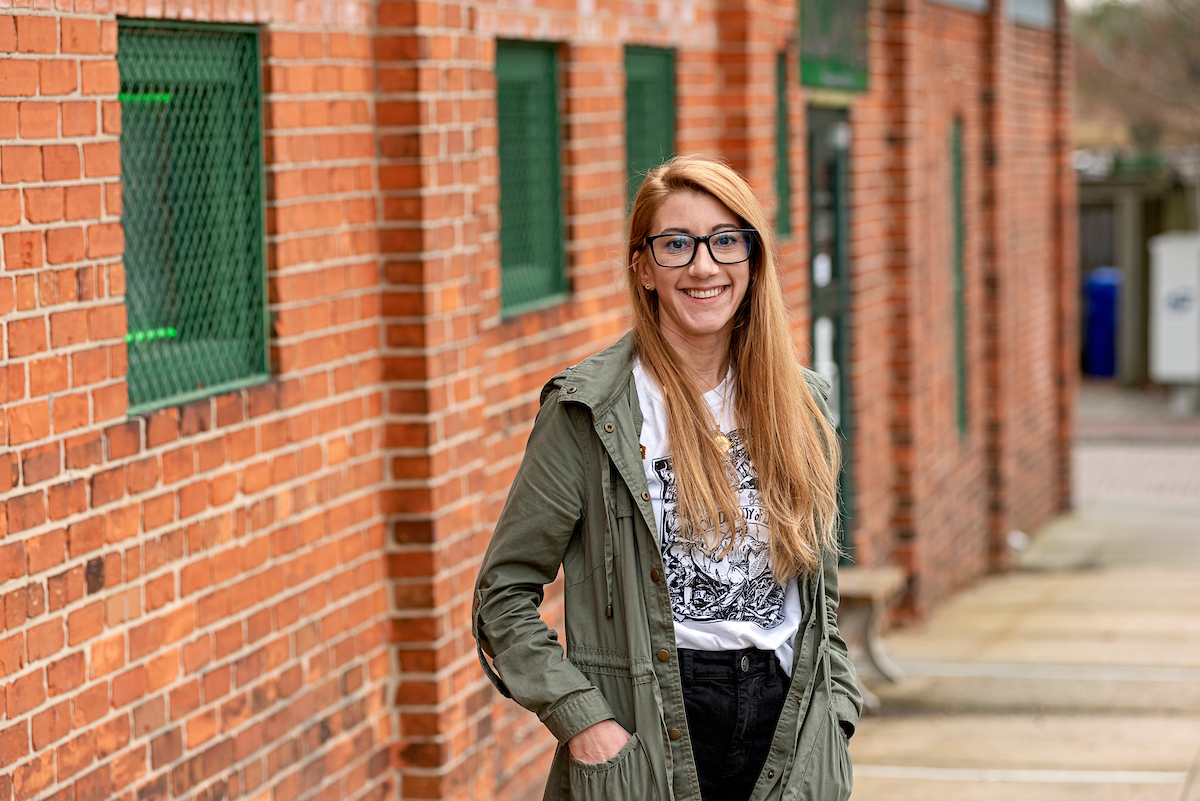 “I was always conventionally funny,” says ALLI COLEMAN, local Wilmington stand up comedian. “In high school, I partnered with some guy friends. We made a website and created some sketches. It was all dumb stuff. We made fun of teachers and students. We got in trouble. We thought we were being funny. None of us were good at editing and our sketches were terrible,” she says laughing at herself.

Coleman has come a long way since then, a regular at local comedy clubs before COVID-19 closed the venues.

She grew up in south Jersey, between Philadelphia and Atlantic City. She came to Wilmington, she says, “How most people get here, escaping to get a new start.”

Coleman had been considering attending graduate school to obtain her Ph.D. after completing her undergraduate degree in behavioral neuroscience from Stockton University in Galloway, New Jersey. But after a role with an intensive outpatient program and doing the math on salaries for postgraduate level positions versus college debt, Coleman started to reconsider.

Around the same time, her best friend’s parents purchased a house in Wilmington and invited her to move with them. When the family left Wilmington in 2016, Coleman stayed, waitressing to make a living.

Stand up comedy was something Coleman always wanted to do. Looking back she says, “No one in my family is really funny. We have a drier sense of humor. My younger brother and I spent time watching shows like Comedy Central Presents and Saturday Night Live. It cracked us wide open for outside-the-box thinking. And we exploited our sarcastic sense of humor.”

Growing up just outside of New York City surrounded Coleman with comedy. “It was just a drive or train ride to see some big-name acts.”

Coleman’s first run at stand up was at a bookstore during college. It was the only open mic that wasn’t just music. And it was also her last, until she moved to Wilmington in 2015 when she started hanging out at the Dead Crow Comedy Room, just watching “to see how to get it done.” She says, “Getting started was the hardest part. To my younger self, I say I wish I would have dived into the deep end instead of wading in the shallow end.”

She describes her comedic style as “existential, vulnerable, and smart.” For the past two years, she has primarily talked about existentialism in her stand up. “If I don’t like something, I learn all about it and then make fun of it.” She puns about the unexpected, non-compliance, and the end of the world.

In addition to performing at the Dead Crow, Coleman has performed at Kings and Neptunes Parlour, both in Raleigh, at clubs in Charlotte, and even back in New Jersey and Philadelphia. In between shows, she did bookkeeping for a Wilmington general contractor. She was so good at bookkeeping that additional local businesses sought her out.

In November 2019, Coleman traveled to Portland, Oregon for a comedy festival. Here she says, “I had a reckoning with comedy. My material in Portland worked out better than I thought. And I just had to go on tour.” But committed bookkeeping work for the Wilmington businesses commanded her back to North Carolina.

In 2020 Coleman started her own bookkeeping business with the goal of working 100% remote, just so she could tour. “That was my entire motivation,” she says.

She admits she still gets nervous before a performance.

“But the second I go on stage, it’s an out of body experience, allowing my higher self to take over. I am present in the moment,” Coleman says.

The second she leaves the stage, she takes a walk to clear her head. “I accept my performance. It didn’t have to be perfect. And I ask myself what I learned and I use that for the next show.”

Females are a minority in this business. Coleman says, “Women are sprinkled into the lineup, but there is an obvious lack of representation.” But she feels like she is treated equally. “I just want to be treated like a person and I would say I am.”

While COVID-19 has temporarily shut down stand up comedy rooms everywhere, Coleman sees a benefit. “Through technology and zoom, I performed at events I never thought I would be worthy to do.” She performed at the Denver Fringe Festival, an annual performing arts festival featuring theater, comedy, improv, dance, and circus arts in downtown Denver.

Coleman, who is pursuing her stand up comedy career seriously, says it’s not just about comedy.

“It’s about creativity. The pandemic has taught me how creative I really am. My cup is full because I’m creating. And that’s what’s getting me through it. I miss stand up so much, but at the same time, I’m not desperate.”

Coleman recognizes that it may be a while until she performs live again. So, she’s writing instead, getting ready.