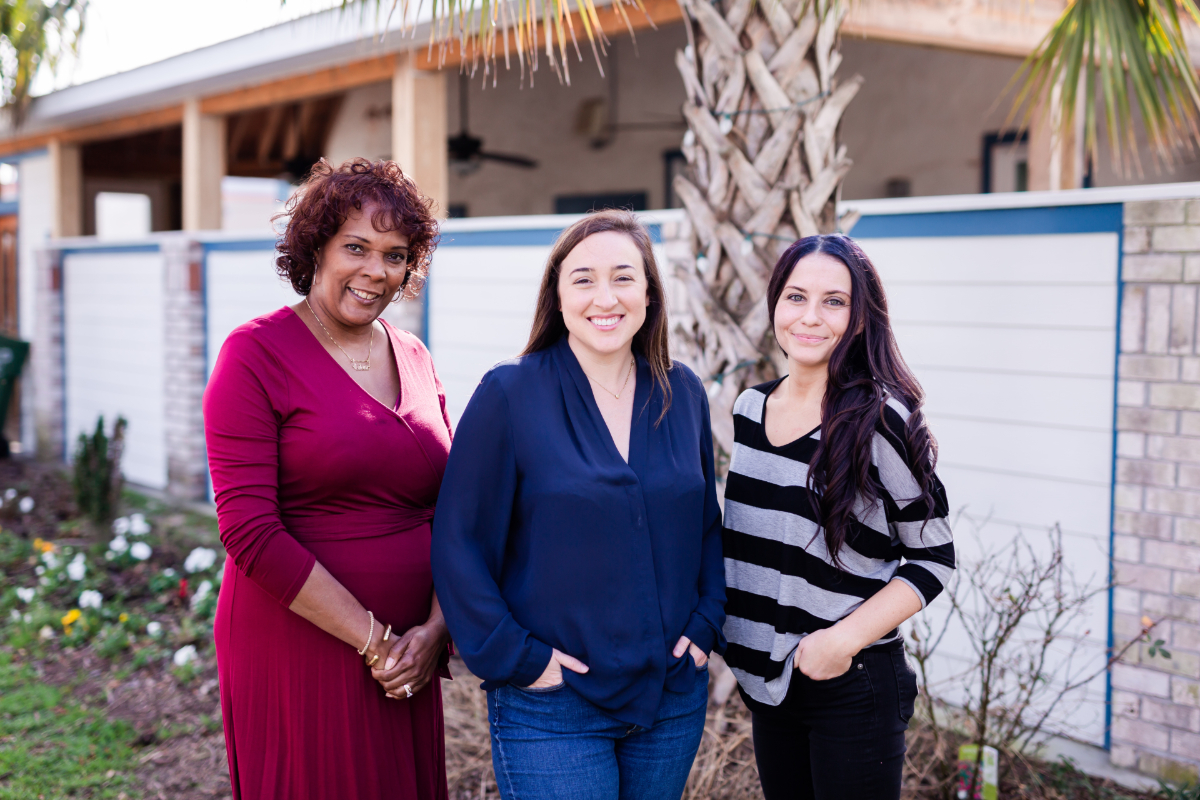 A small team at Cape Fear Collective has the urgent need for affordable housing squarely in its sights. Using data and a human network to identify both housing opportunities and families needing decent shelter, the four-person team solicits investments, extends that network, and builds trust with the population it serves.

“Our priorities this year are surging renovations and resident services,” says MEAGHAN DENNISON (pictured middle), who recently moved into the position of interim CEO for CFC, a Wilmington-based social impact nonprofit that serves southeastern North Carolina. “Homeownership is the goal.”

With investments from four banks – Live Oak, First National, First Bank, and First Citizens – CFC has purchased 113 housing units since launching its initiative more than a year ago. CFC closed on the purchase of seventy of those in January. Most units are occupied but need revamping to make them safe and fully functional; some are not habitable.

“Our first steps are to onboard those units and to build relationships with the owners and residents,” Dennison says. “We surge human capital and resources. It’s really important for us to – as quickly as possible – make sure the house is safe and connect with our residents.”

Even though she is now in CFC’s primary leadership role, Dennison is still part of the team that consists of WESLEY MYRICK, the organization’s new chief financial officer; EILEEN O’MALLEY (pictured right), director of operations; and CATRECIA MCCOY BOWMAN (pictured left), housing program manager. Bowman is the resident-facing member of CFC’s housing team.

“Our mission is to expand and create homeownership program for residents who have the opportunity to build wealth through housing and move toward economic self-sufficiency and stability,” Bowman says.

Bowman is intimately familiar with housing issues and creative solutions. She was herself a successful participant in a homeownership program in Wilmington who worked her way up to serving as the Wilmington Housing Authority’s director of resident services before leaving to help lead housing authorities elsewhere. She then took a job with FEMA, deploying to various disaster sites to help with housing placements. She knows that there’s more to transforming communities than simply rehabbing rundown residences and figuring out how to create more new units.

“As you are working on the bricks and sticks, you are paying attention to the family and the family needs, so you are creating a very individualized plan for the family,” she explains. “Ours is not a cookie-cutter program. Even if (individuals) say ‘I’m not ready for homeownership, I want to continue renting,’ we put resources out there, whether it’s the idea of entrepreneurship or employment. We empower and invest in the human capital as well.”

One approach that Wilmington Housing Authority has had success with in the past is setting up escrow accounts for its residents. The escrowed funds can eventually be used to help the resident purchase a home, but the residents must be able to envision themselves as homeowners, Bowman says.

“One thing we have to be cognizant of in launching this program is if families come into a rental (property) they will continue to see it as a rental rather than something they could purchase,” Bowman adds. “We provide resources for them so they can assess whether they might be able to purchase it. They have renter’s mentality rather than homeowner mentality.”

Cape Fear Collective can’t do everything to tackle community problems of inequity: the organization actively seeks to partner with organizations that are pursuing complementary missions.

“We don’t begin to call ourselves housing experts,” Dennison says. “We look for a model that puts private investment into the community. The goal is always to partner. One example is Good Shepherd Center, where they do case management and placement of residents. We can be the capital and inventory and the ability to improve that housing stock, but our partner does what they are already doing.

“In our first housing portfolio of twenty units, we partnered with WARM (Wilmington Area Rebuilding Ministry) to address those safety repairs,” Dennison adds.

Another key partner is BRENDA DIXON, a real estate agent and founder of Get That Deed, a program to help perennial renters purchase a home. Her efforts have been successful, but she faces a problem plaguing all would-be homebuyers in the Cape Fear area: the lack of housing inventory.

“We know there’s a problem and we’re trying to figure out what the solution is,” Bowman says. “Is there a program working in another state that we can use as a model? Wilmington doesn’t have a lot of housing stock left that’s affordable. Having a New Hanover County family purchase a home outside the county could put them at a disadvantage because of a long commute. We’re looking at abandoned hotels and other properties. Cargo homes. I received a call about a former group home in Bladen County – the building is just sitting there.

“It’s going to take the whole community to solve the affordable housing problem, but I think we have the resources in this community.”