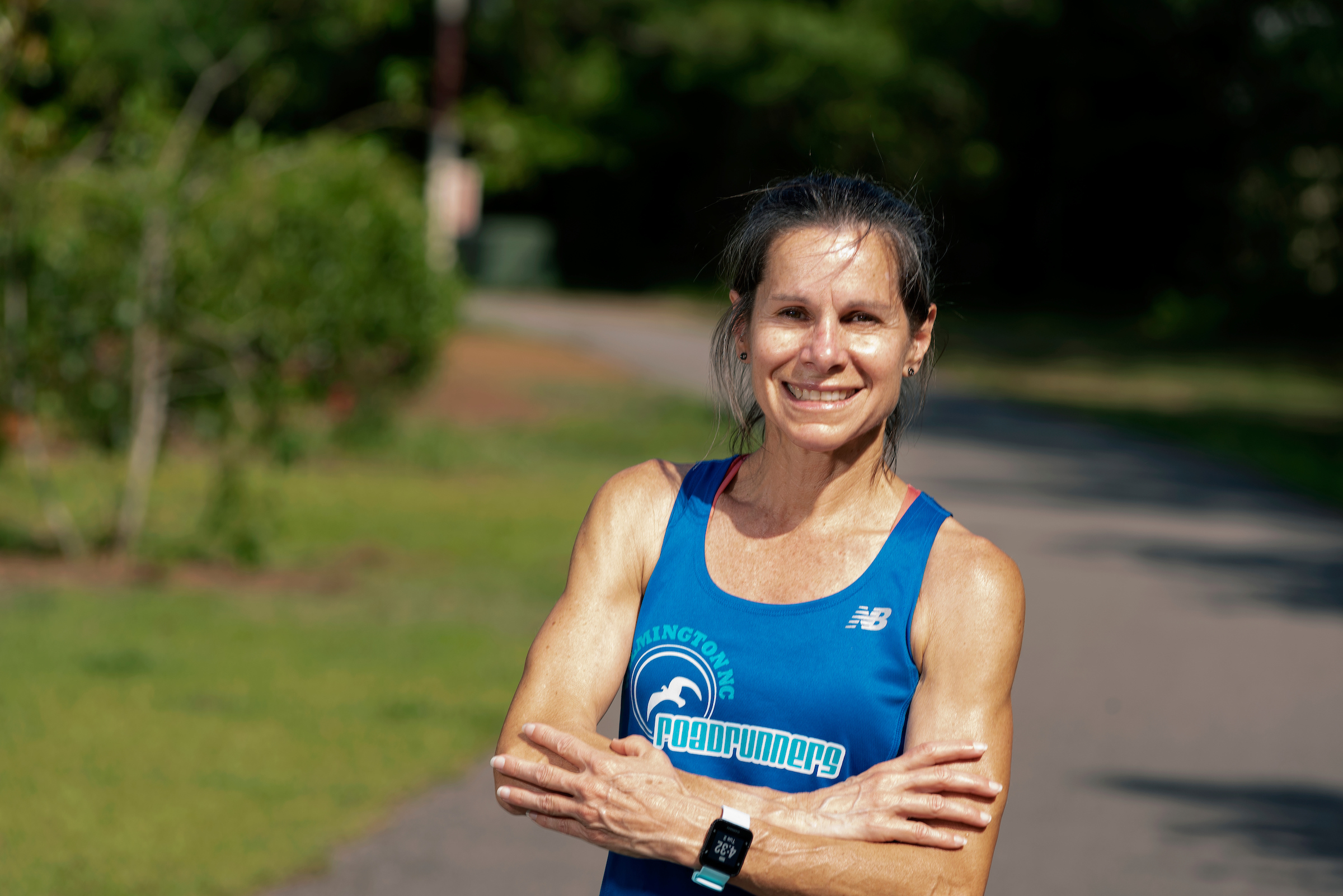 BRENDA ESTLACK has always been active. She ran track and cross country in high school and after graduation, she played softball for many years, then switched to bodybuilding.

Estlack moved to Wilmington in 2000 and after her brother’s death in 2007, she started running again.

“He died at 56. It was my motivation to get back to running and keep healthy,” she says. “It helped me gain mental and physical strength.”

A friend suggested Estlack join the Wilmington Road Runners Club. She wasn’t a distance runner at the time, but club members helped her learn more about adding more miles to her runs.

“You can make running hard or running easy,” she says.

Since then, Estlack has qualified for the Boston Marathon three times. In June 2019, Estlack competed in the National Senior Games in Albuquerque, New Mexico. She won gold in the 1,500-meter run. She also placed second in the 800-meter for her age group (age 55-59).

Founded in 1977, the Wilmington Road Runners Club is one of the oldest continuously operating clubs in North Carolina. Its more than 350 members range from walkers to ultra-runners who run more than the 26.2 miles in a marathon.

Estlack serves as the club president. The club meets monthly to discuss events, activities, and finances. Its primary function is to host group runs to promote health and fitness and to support each other.

Club members can choose from four miles in Wrightsville Beach on Mondays, four to six miles of running hills downtown on Tuesdays, track workouts at UNC Wilmington on Thursdays, flat four to six miles on Fridays or longer runs of 10 miles on Saturdays and Sundays.

“Everyone runs at their own pace – some go shorter and longer,” she says.

After runs, members gather at coffee shops, restaurants, or bars, which supports local businesses. “It’s a great way to meet people and get to know your community,” she says.

The club also supports a variety of events including charity races and community service programs. Road Runners participate in Relay For Life and volunteer at other races, helping with packet pickup, waters stations, and along the course.

They also clean up a two-mile stretch in Wrightsville Beach twice a year as part of the Adopt-a-Highway program. Each year, the Wilmington Road Runners Club awards two $1,000 scholarships to high school seniors in the Cape Fear region. The club’s official race, the Seaside Shuffle 5K, is held each year in November. Funds raised go towards the scholarship program.

Estlack says group runs have changed due to the coronavirus pandemic. As the Cape Fear area reopens in phases, soft group runs have resumed with social distancing measures in place.

“This happens naturally due to different paces,” Estlack says. “We do staggered starts with larger groups.”

Estlack says running clubs like theirs make the city alive and vibrant.

“Seeing runners and walkers out doing something healthy inspires people and helps promote a healthy lifestyle,” she says. “Running is hard but getting out and moving is part of what keeps runners running. You’re out seeing nature and putting one foot in front of the other is a good feeling.”

To learn more about the Wilmington Road Runners Club, visit its website.