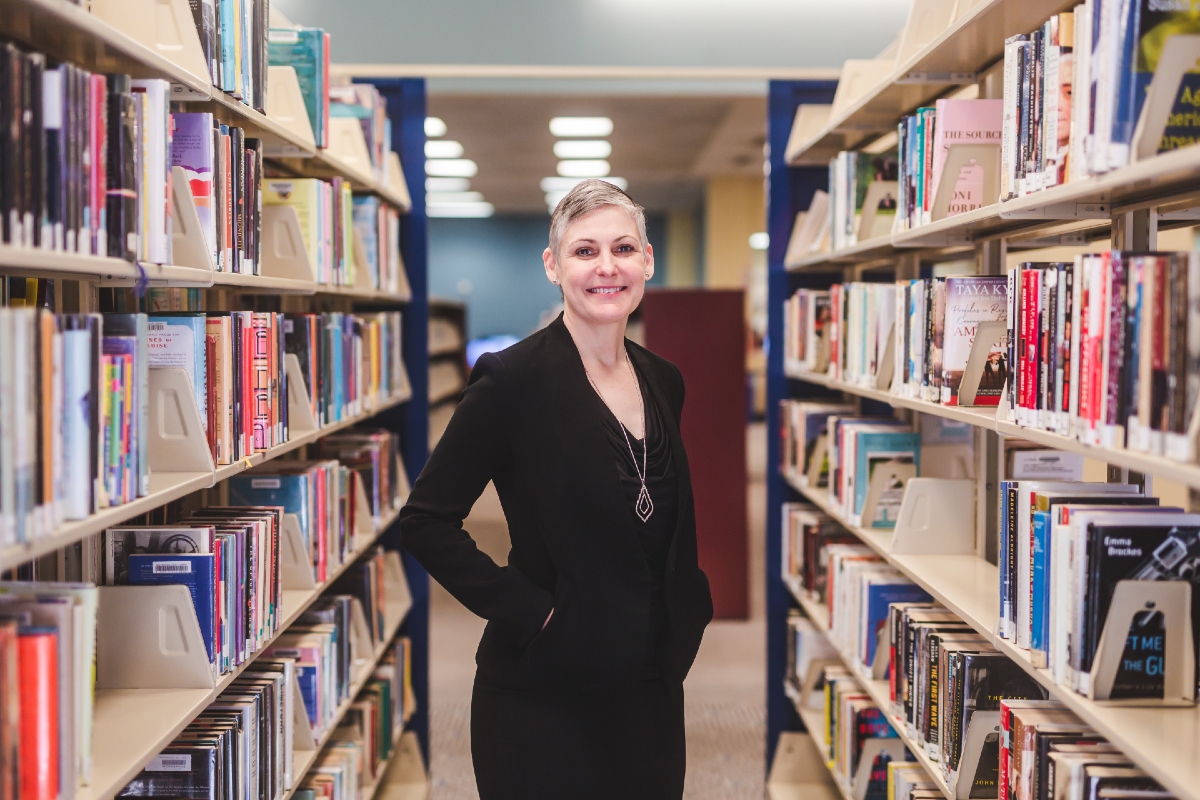 DANA CONNERS planned on a career working in a history museum—her dream job since college. But life took a different path. And that has worked out for her. Conners recently took on the role of Public Library Director for the New Hanover County Public Library system.

After graduation, reality hit when she realized that history museum jobs were much harder to find. What Conners did find out was that there were a lot of jobs available in public libraries. While a student at Appalachian State, she worked in the library. Capitalizing on that previous experience, she decided to take a job working as a reference assistant at the Statesville Public Library, while holding out for a museum position.

Conners discovered she really enjoyed her work. “Especially in the pre-internet days, I really liked helping customers use a wide variety of reference books to answer their questions,” she says. That interest led her to pursue a master’s degree in Library and Information Studies from UNC-Greensboro.

Conners’ post-graduate career involved stints in the Charlotte area as assistant director for the Union County Public Library. That position was significant because Union County was one of the fastest-growing counties at the time.

“I was fortunate to work on quite a few building projects as we really expanded the work of that library system,” Conners says.

She was named North Carolina Public Library Director of the Year in 2012 for her work at the Cabarrus Public Library, where she often visited as a child.

In 2019, Conners left North Carolina for Austin, Texas. There she oversaw the operations of 21 library locations, the history center, a used bookstore, an events center, and the customer access division. Now back in her old stomping ground as library director, she is facing a familiar environment, but as with any new job, there are still obstacles.

“It is always challenging to get to know the particular way the organization works and to get to know the community it serves,” she says. “I’m fortunate that I have worked in libraries in North Carolina for a long time and am well versed in how they function.”

Helping the library system make an impact on an individual, community, and county level is a big part of Conners’ job as director. She spends time at each location ensuring alignment and expectations are set to “keep moving forward”. In addition, Conners works with many county departments and coordinates with the three boards that support the library—the Library Advisory Board, the Library Foundation Board, and the Friends of the Library Board.

Conners has come on board at a critical moment for the future of the New Hanover County library system. It is almost time to renew the library’s five-year strategic plan and conversations are in place about the new North Chase Branch library. “We’re excited to get closer to providing a new library in this underserved part of the county,” she says. Also, on the new director’s agenda is Project Grace and plans for a new downtown library.