From the marshes to the kitchens, Ana Shellem has built a one-woman shop to showcase local shellfish 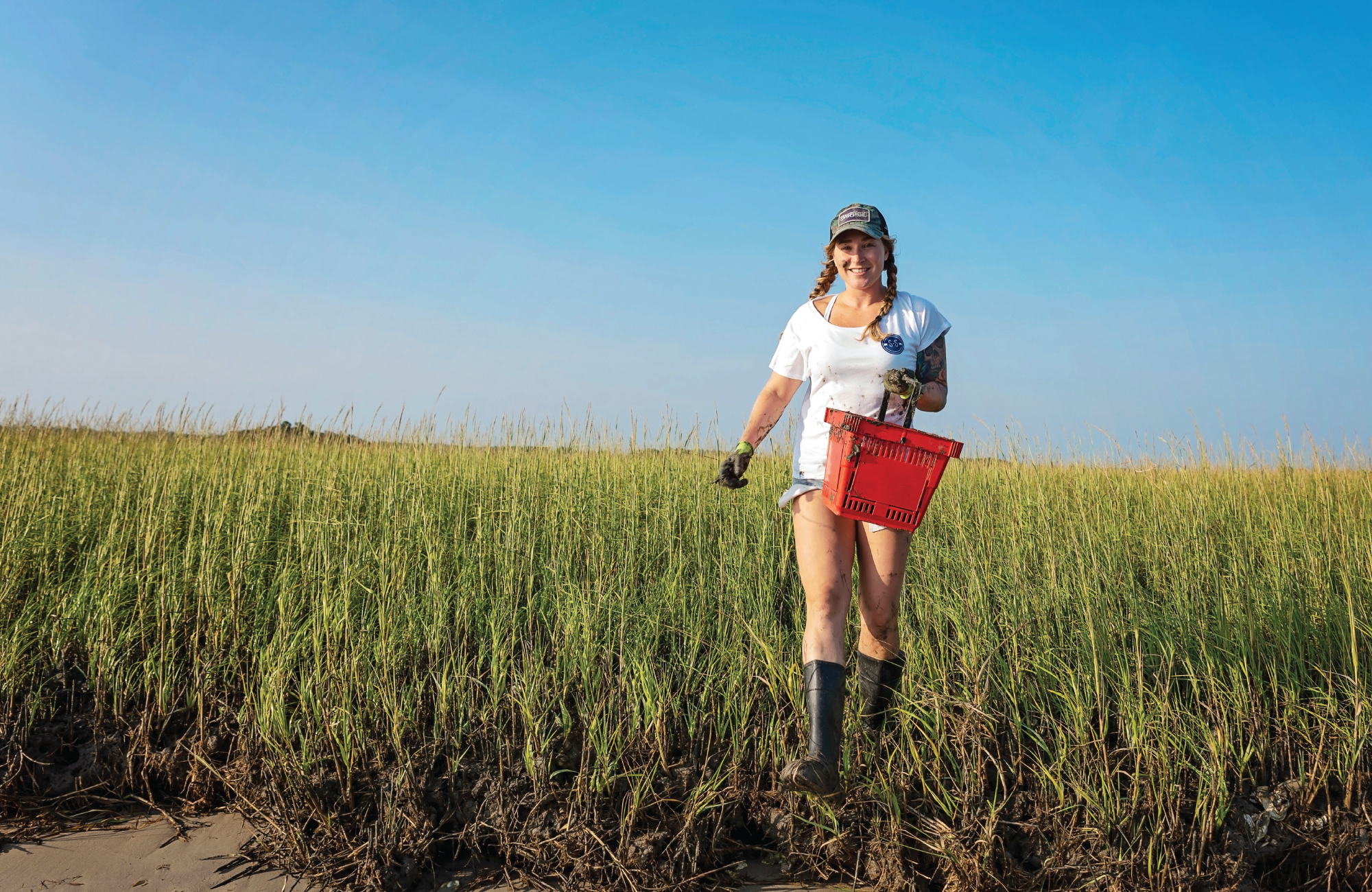 To say ANA SHELLEM was destined to become a commercial fisherwoman might seem like a bit of a stretch if you consider she started out as a childhood actress and model.

Like many navigating the wilds of show business, she would eventually spend several years working in the hospitality industry, bartending and managing bars and restaurants. But, shortly after moving to Wilmington from Harlem, she met Jon Shellem, the man who would introduce her to the marsh.

Fast-forward a few years, and she’s hooked on shellfishing, living on a boat, married to Jon, with the last name of Shellem – sounds like destiny after all.

“Nowadays, Jon only comes out to the marsh with me a couple of times a year, and at some point I’ll yell over to him and ask him how many clams he’s got, and he’ll say something like eighty or ninety, and I’ll have over 300,” Ana Shellem says.

She launched Shell’em Seafood, a boutique shellfish company, from her Wrightsville Beach houseboat in November 2017, with the hope that her experience in the restaurant industry would help her market her product. She’s a one-woman operation specializing in locally harvested shellfish and stone crabs. 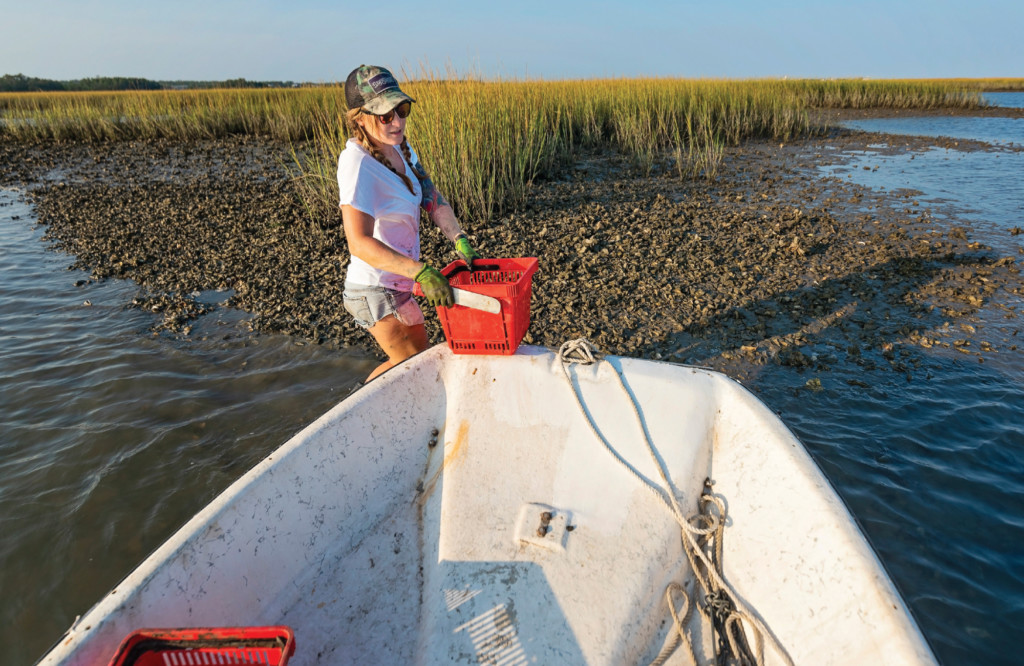 Ana Shellem has spent the past two years making connections with chefs across the state and building her accounts one by one. She now supplies some of North Carolina’s most acclaimed restaurants, including Rhubarb and Cucina 24 in Asheville, and Heirloom, Fin and Fino, and The Stanley in Charlotte. Locally, she delivers daily to restaurants such as Catch, Ceviche’s, East at the Blockade Runner, Surf House, Wrightsville Beach Brewery, The Second Glass, Benny’s Big Time Pizzeria, and True Blue Butcher & Table.

She delivers her catch to each chef personally, allowing her to maintain the relationships she’s built and to ensure that her product continues to meet the standards of her customers.

“I know the product is super fresh because it’s only been in my hands,” Ana Shellem says. “There is no middle man. I handle every step of the process, the harvesting, cleaning, bagging, tagging, all the paperwork, all the refrigeration, the selling, and the delivering. And, it’s the most rewarding job I’ve ever had in my life.”

Ana Shellem says she used to believe she could put up with the negative aspects of show business and restaurant life as long as the money was right. Now, she finds her connection to her work more valuable than her income. She considers herself fortunate to have been able to turn her true passion into a viable business that keeps her connected to the restaurant industry in a more positive way.

“I love that it’s a really honest job,” Shellem says. “I love that I’m in control of it, and that I get to work with people who share my passion and appreciation for the products.”

But, life as a fisherwoman is not without its challenges. To begin with, like all who work the water, she is at the mercy of Mother Nature. When Hurricane Florence hit the Cape Fear last fall, Shell’em Seafood was out of business for nearly three months. During that time, Ana Shellem painted oyster shell ornaments to help keep her business afloat. 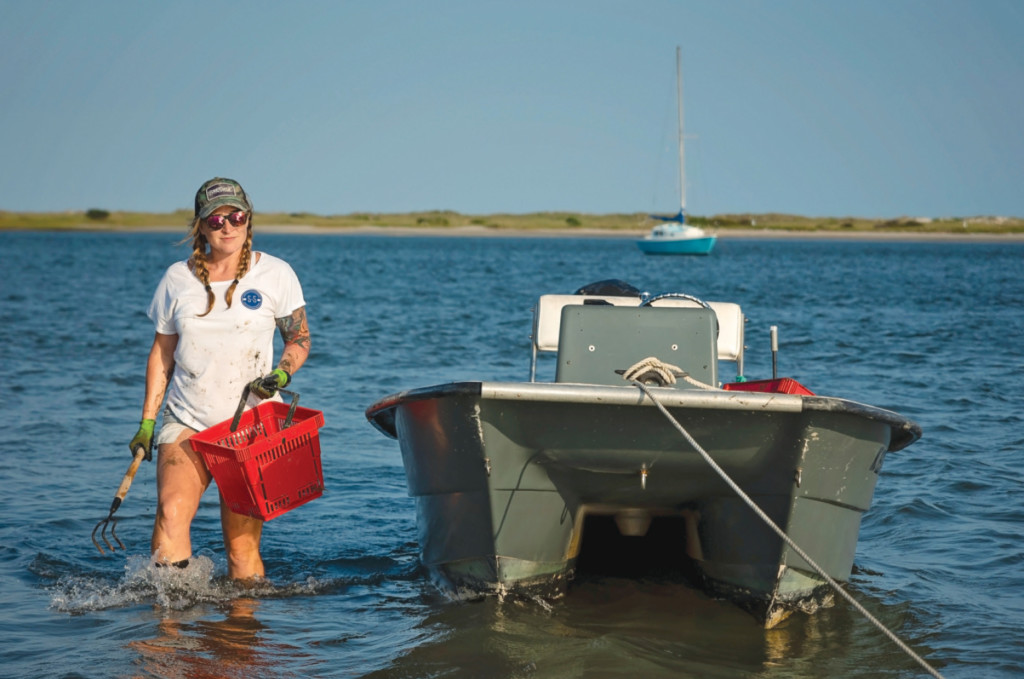 She also operates at the mercy of the tides, planning her days around the ebb and flow of the waterways, waiting for the tides to reach the proper levels for harvesting. Sometimes, that means heading out at the break of dawn or waiting until sunset to make her way through the marshes and estuaries throughout her territory, which stretches from Carolina Beach to Topsail Island. One product that Ana Shellem is particularly excited about these days is locally harvested wild mussels.

She describes them as having a great depth of flavor, saltier and earthier than a Prince Edward Island mussel, which has a hint of sweetness to it.

She’s one of only a couple of harvesters in the state currently bringing them in, and chef Keith Rhodes chose to feature them last year on an episode of Order Fire , a Charlotte-based web video series that showcases culinarians, purveyors, farmers, restaurateurs, and mixologists from across the state.

Ana Shellem attended the premiere of the episode at Free Range Brewing in Charlotte, where she made connections with many of the chefs she currently provides with the very same product.

“I didn’t realize how many doors that (show) would open,” she says. “Being a female in the fishing world and bringing in a product that no one else is providing has been a real benefit to me. I sell more mussels than anything, and they are absolutely delicious.”

When she’s not out on the boat harvesting or on the road making deliveries, Ana Shellem is often found in the kitchen of her houseboat, utilizing her catch to create new recipes, which she plans to incorporate into a cookbook.

She was also recently the subject of the Lean In Collection, a project by Getty Images aimed at creating a library of images devoted to the powerful depiction of women, girls, and the people who support them.