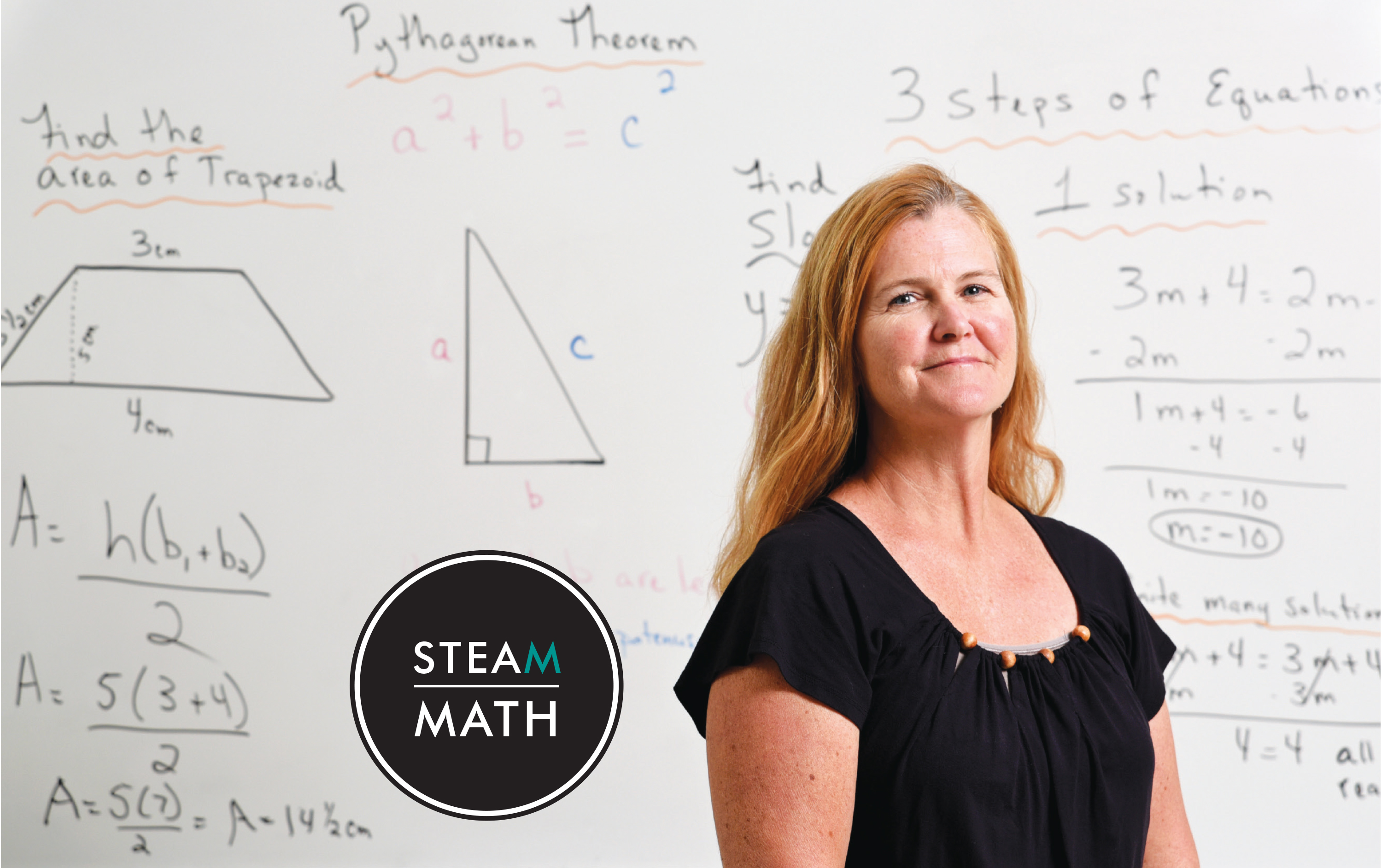 But, one local teacher isn’t held back by this competition for focus.

Rather, she uses it to her advantage, by applying real-world experiences to her middle school STEM and mathematics curriculums.

ELIZABETH CRACE has been teaching for almost twenty-five years. She joined the New Hanover County school district in 1999, first as a seventh-grade math teacher at Williston Middle School and then at Murray Middle School, where she has served as the mathematics instructional coach for eleven years and counting.

Perhaps it’s her nontraditional start that motivates her to create interactive classrooms. She first studied and majored in accounting. But, when that profession didn’t quite feel right, she began working as a substitute teacher after others made comments about how she might have a natural knack for classroom instruction.

“I wanted more interaction with kids and other adults, especially other adults who were passionate about math,” Crace says.

So, she went back to school and acquired a master’s degree in special education.

“When I moved to North Carolina, I didn’t want to just teach special ed,” she says. “I wanted to help kids of all different types and abilities and use my special ed background to help me access different ideas and strategies for all kids.”

Often, students don’t think math is “fun or necessary,” Crace says, whereas, in science teaching, students can see the exciting results of their experiments or discoveries. Crace has adapted those exploratory methods to teach both subjects, whether it’s for an interdisciplinary STEM elective or a core mathematics class.

“I really believe in putting manipulatives in kids’ hands,” Crace says, “by getting them to truly be able to touch and build in math in a real-life setting, instead of doing what I like to call ‘naked math problems in a book.’”

Crace begins most lessons with a “manipulative” or “exploration.” Before even learning an equation, the students engage in a relevant exercise. For example, to illustrate how measurements of volume work, the students will break an item – maybe even a robot! – into parts.

“If we make a robot go from point A to point B, they don’t really see that they’re doing the math, yet they’re still doing it,” Crace says. “Pairing the math with science is natural. We’re trying to get them excited about some sciences and use the math skills in science to feel like it (math) has a purpose.”

This integration of science and technology excites the math students, but Crace also demonstrates the purpose of mathematics by incorporating real-world responsibilities.

“I use a token economy to manage my classroom,” she says. “I totally run my classroom like a mini-society … Everyone has jobs. They get paid for coming to class.”

One of the students will “work” as the accountant, and, at the end of two weeks, they will send out “paychecks” to the students for their other jobs. Although financial literacy isn’t part of the common core standards, Crace uses it to teach lessons in disciplines such as exponential growth or decimals.

Her students learn about taxes and gross pay versus net pay. They use excel spreadsheets to create budgets. They even research how much money they need for college and how much they’ll make after graduating.

This token economy continues throughout the entire class term. The students like the routine, she says. Every other Friday is “payday.”

On Mondays, the students learn about careers in STEM. Crace often highlights women working in science and math to empower young girls to pursue industries that haven’t historically represented them.

“Girls aren’t as comfortable asking questions in middle school,” she says. “They’re afraid to experience failure in front of the boys.”

Crace works to remove that “stigma” by varying the ways kids are called on in the classroom and by appointing same-gender work pairs so young girls have the opportunity to discuss questions and have the confidence to present answers together.

“My biggest thing is I want the students to believe in education and to empower themselves,” Crace says. “I always say to them that I empower myself and that with hard work and support, you can be anything.”