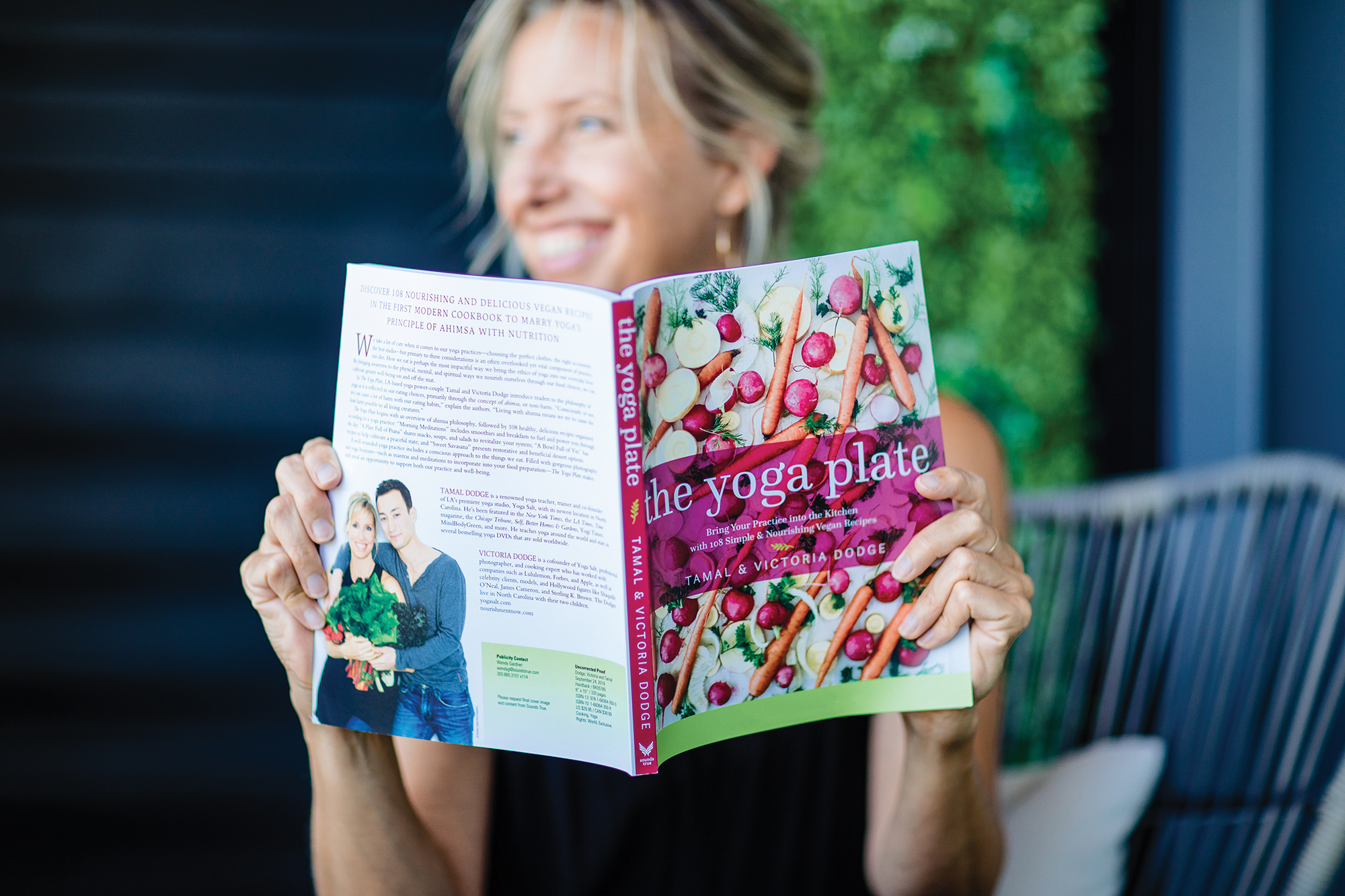 Summer rolls with peanut sauce. Stuffed shells. Strawberry rhubarb crumble. These are just a few of the yummy recipes in a soon-to-be-released cookbook The Yoga Plate by Wilmington’s Victoria and Tamal Dodge.

The Dodges are the owners of Yoga Salt, a yoga studio located in Wilmington’s South Front District that focuses on vinyasa yoga (commonly referred to as “flow yoga”). Because the cookbook is an outgrowth of the couple’s love for yoga and yoga philosophy as well as cooking, it includes guidelines on how to weave yoga principals into your daily life, and all its recipes are vegan.

“Yoga asks you to do the least amount of harm possible,” Tamal says. “A plant-based diet is when we create the least harm.”

Don’t let the cookbook’s vegan slant scare you off. The mouth-watering recipes in The Yoga Plate, which have been taste-tested by the Dodges’ neighbors and friends, received high marks from vegans and carnivores, alike. Most take thirty minutes or less from prep to table and use ingredients found in local grocery stores.

“We love to cook and love to experiment and try to find things that aren’t vegan and turn them vegan,” Victoria says. “It’s a great cookbook for anybody and for someone just being introduced to the plant-based life.”

Though both Victoria and Tamal love to cook, a cookbook wasn’t anywhere in their plans. In fact, Victoria didn’t even know how to cook when she met Tamal in Los Angeles, where the two resided. Victoria was a sought-after photographer who captured the likenesses of celebrities such as Shaquille O’Neal and James Cameron. Her work has been featured in Crate & Barrel, Forbes, and other major publications. Tamal owned the Yoga Salt studio in Los Angeles and often traveled to Wilmington and other cities to teach yoga. 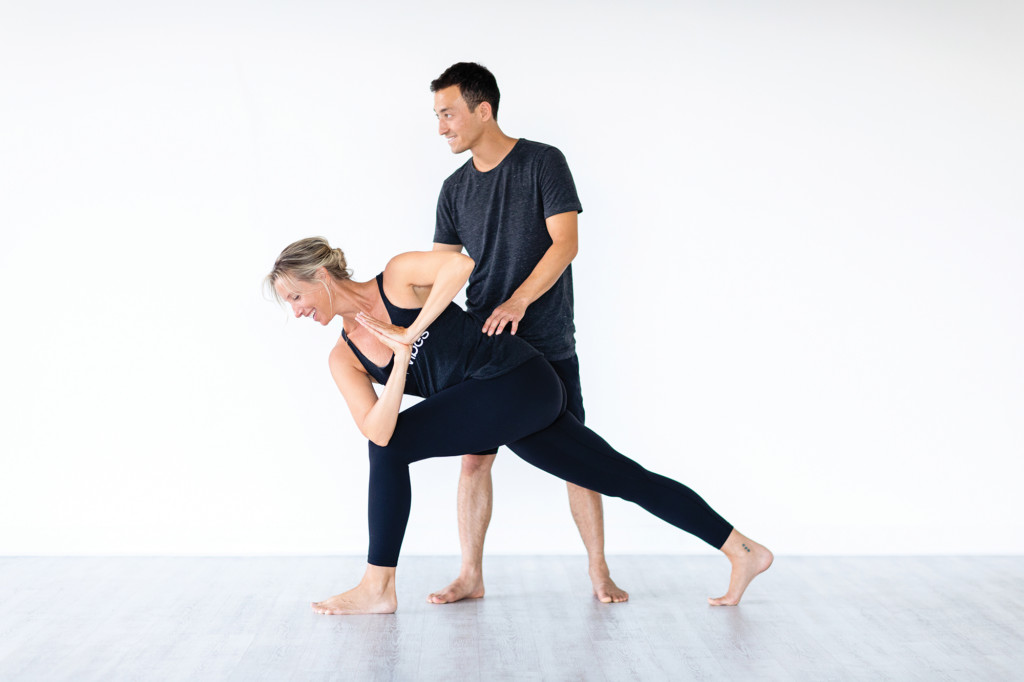 Two years later, in 2008, the two married. Tamal was already an accomplished vegan cook, and as Victoria adopted the yoga lifestyle, she dove into veganism.

“I felt like I was in kindergarten,” she says. “No one learns about health and nutrition. Most parents do what their parents did. I wanted to share what I’d learned.”

The couple taught cooking classes around Los Angeles and started their cooking blog The Yoga Plate.

Then one of the Dodges’ Los Angeles teachers told them they should write a cookbook, and the idea took off. Another friend introduced the Dodges to a literary agent, who loved the idea. The couple wrote a seventy-five-page proposal, and Sounds True Publishing Company, which publishes books on yoga and meditation, immediately accepted it.

Victoria credits the proposal’s fast acceptance to finding the right publishing company with the perfect audience for the cookbook and the fact that we’re in a time when people want to be more aware of what they eat.

“People want to be more mindful, to consciously eat a cleaner, healthier diet,” she says.

So began a whirlwind of activity. On their travels, the couple had fallen in love with Wilmington and were preparing to move and open their second Yoga Salt studio here. Now, they had to write their cookbook, too. 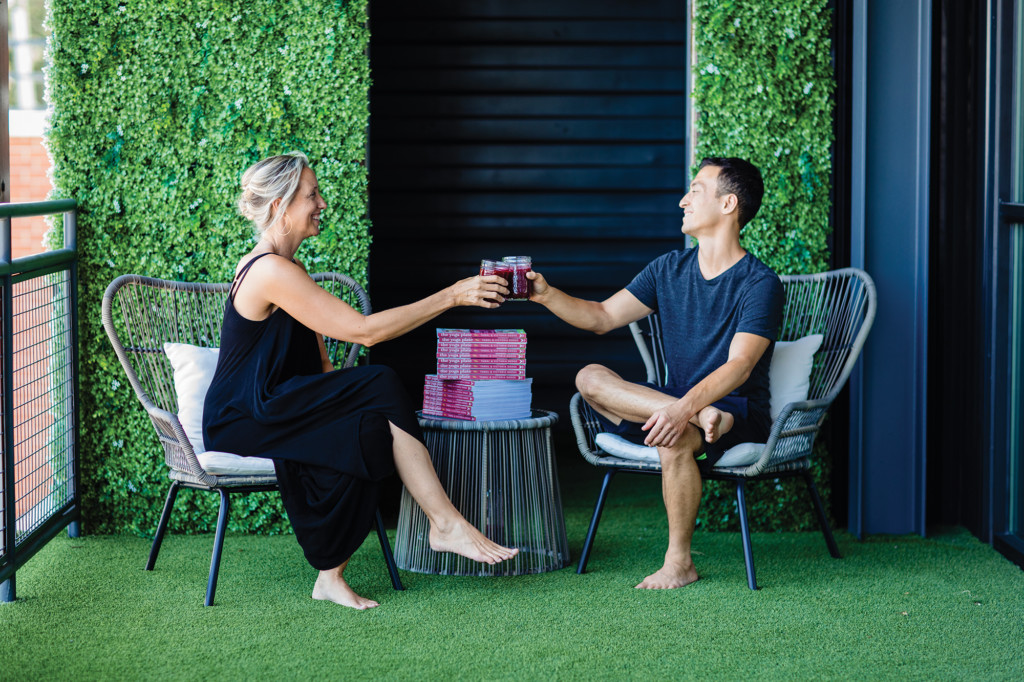 That meant testing and perfecting recipes, making them over and over, and getting feedback from neighbors, friends, and students. Victoria was also photographing each of the finished dishes.

In the end, the Dodges had too many recipes and selected 108 of their favorites for the book. Then, they added guidelines on daily yoga practice for each recipe.

“Those who follow the yoga culture will appreciate the yoga principles that are presented in the cookbook and how we can make those principles part of our daily life,” Tamal says.

The cookbook is separated into sections that might resemble a typical yoga class.

It includes “Morning Meditations,” where you’ll find breakfast, smoothies, and teas; “A Plate Full of Prana,” which offers snacks, soups, and salads; “A Bowl Full of Yin,” which features entrees, dips, and sauces; and “Sweet Savasana,” which has something for every sweet tooth.

The Dodges have posted some of their recipes on theyogaplate.com and featured them in their YouTube and Instagram videos. They also hold cooking classes at Yoga Salt, 1540 South Second Street, Suite 220.

The Yoga Plate will be released in September and available from Amazon, Barnes & Noble, independent booksellers, or at Yoga Salt. 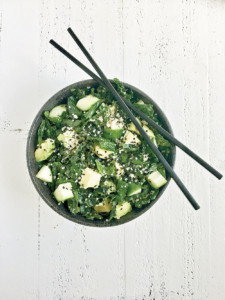 An excerpt from The Yoga Plate:

This salad is one of our household staples. It only takes about 30 minutes from start to finish and it is a crowd pleaser. Quinoa is not only gluten free, it is also a super food, loaded with protein, fiber, magnesium and iron. Plus, seaweed is light and refreshing yet super nourishing. It’s a hit in our house. Sometimes, though, we’ll omit the seaweed from this salad, depending on whom we are serving it to. And there are still plenty of healthy ingredients to enjoy. Kale is a powerhouse, filled with vitamin C, fiber, vitamin K, vitamin A, manganese and copper. Avocado has healthy fats and lemon is very cleansing. You can’t go wrong with this salad.

• 1 cup or more of kale, ripped into small pieces

1. Place the quinoa and water in a small pot and bring to a boil. Reduce heat and cover for 20 minutes. Let cool.

2. After the quinoa has cooled a bit, scoop it into a large bowl. Add the kale, olive oil, nori, cucumbers, avocado, black sesame seeds, lemon, garlic salt and salt. Toss and serve. It’s that simple!