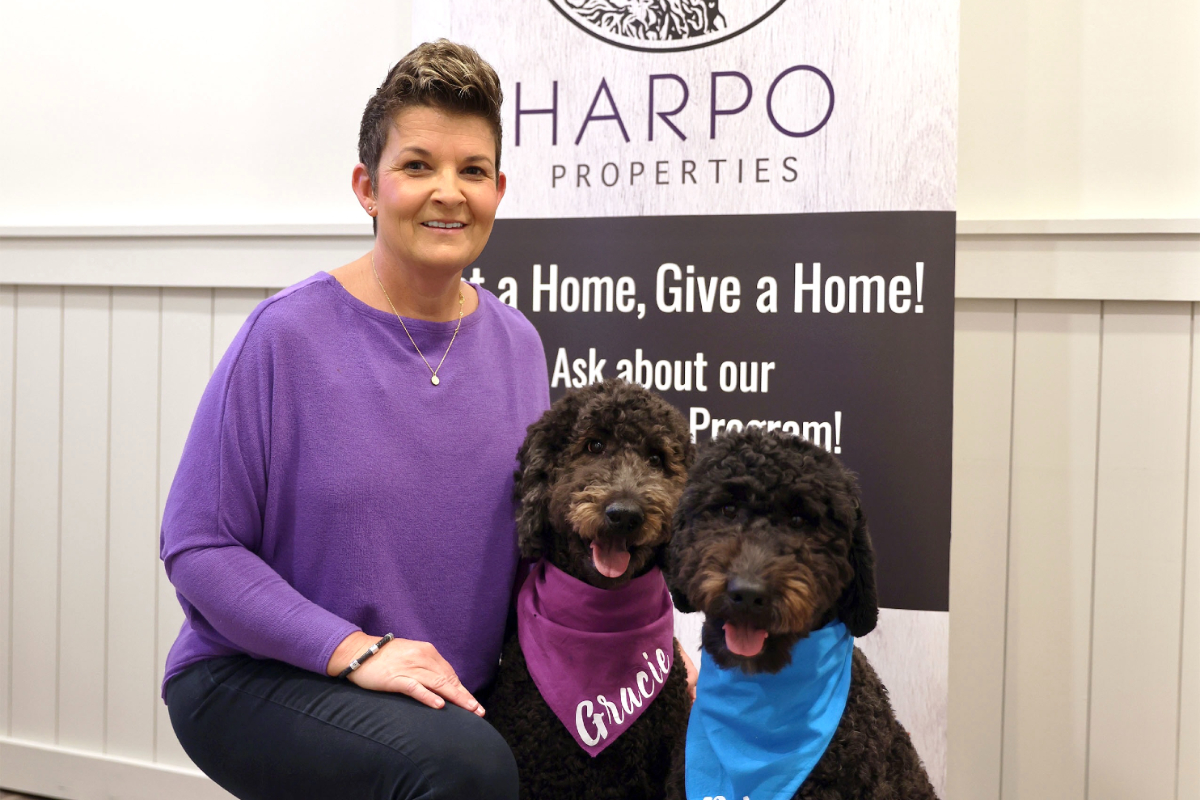 MELISSA MARTIN used her free time to volunteer in the community with her beloved Goldendoodle, Harpo, whom she adopted as a puppy in 2012.

“I brought him home from a New Year’s Eve party and he was five weeks old. He was a handful and was destructive,” Martin says with a laugh. “I kept telling him, ‘You need a job!’ So, I started therapy work with him.”

In August 2019, Harpo and Martin’s West Highland Terriers, Abby and Izzy, died within hours after contracting blue-green algae poisoning after playing at the edge of a pond off Independence Boulevard. “I was gutted,” she says. “I lost my way a bit.” She raised money for signs to be posted at local ponds and continues to speak about the danger of harmful algal blooms.

Martin also poured her heart into real estate. As a Wilmington native, she often was asked by Plexus customers for real estate agent referrals, so she decided to get her real estate license. “At first, it was to just collect the 25% referral fee,” Martin says. “But I found that I love every aspect of it.” She quickly became a top producer in her Keller Williams office.

“When Harpo died, I didn’t think I’d get more dogs or do more therapy work, but I wanted to continue his legacy,” Martin says. She rebranded her real estate business as Harpo Properties and began sponsoring shelter dogs. For every home sold, Martin sponsors one shelter dog – ranging from adoption to medical fees.

“As a Realtor, I want people to know, like, and trust me,” she says. “I never want to be salesy.” She particularly enjoys working with first-time homebuyers, veterans, and minorities. She is a member of the Diversity, Equity, and Inclusion Network of the Cape Fear Realtors and is working to bring a LGBTQ+ Real Estate Alliance chapter to Wilmington.

“There’s such a homeownership gap for minorities, especially people of color and the LGBTQ community, which is why I’m so involved,” Martin says.

Martin also offers seminars to educate people on the homebuying process. “We give them a workbook, provide childcare, and dinner. And there’s no pressure,” she says. “It’s not about the commission. It’s got to be a win for everybody. I want to educate you and get you plugged in.”

Even after a home sells, Martin stays in contact with her customers. “I check in to ensure they have enough insurance, particularly due to the change in the market, ask if they need help with anything, and tell them about local, social, and give-back events.”

Together Martin and Harpo touched more than 3,000 lives during Harpo’s therapy work. Now with her daughter and Harpo Properties Director of Operations Morgan Grady – and two new Goldendoodles Gracie and Ru (short for Ruth Bader Ginsburg) – she plans to grow their team locally, and eventually nationally. “And by doing that, clear every shelter in America and continue Harpo’s legacy of service and love. Harpo changed my life and made me a better person,” Martin says.