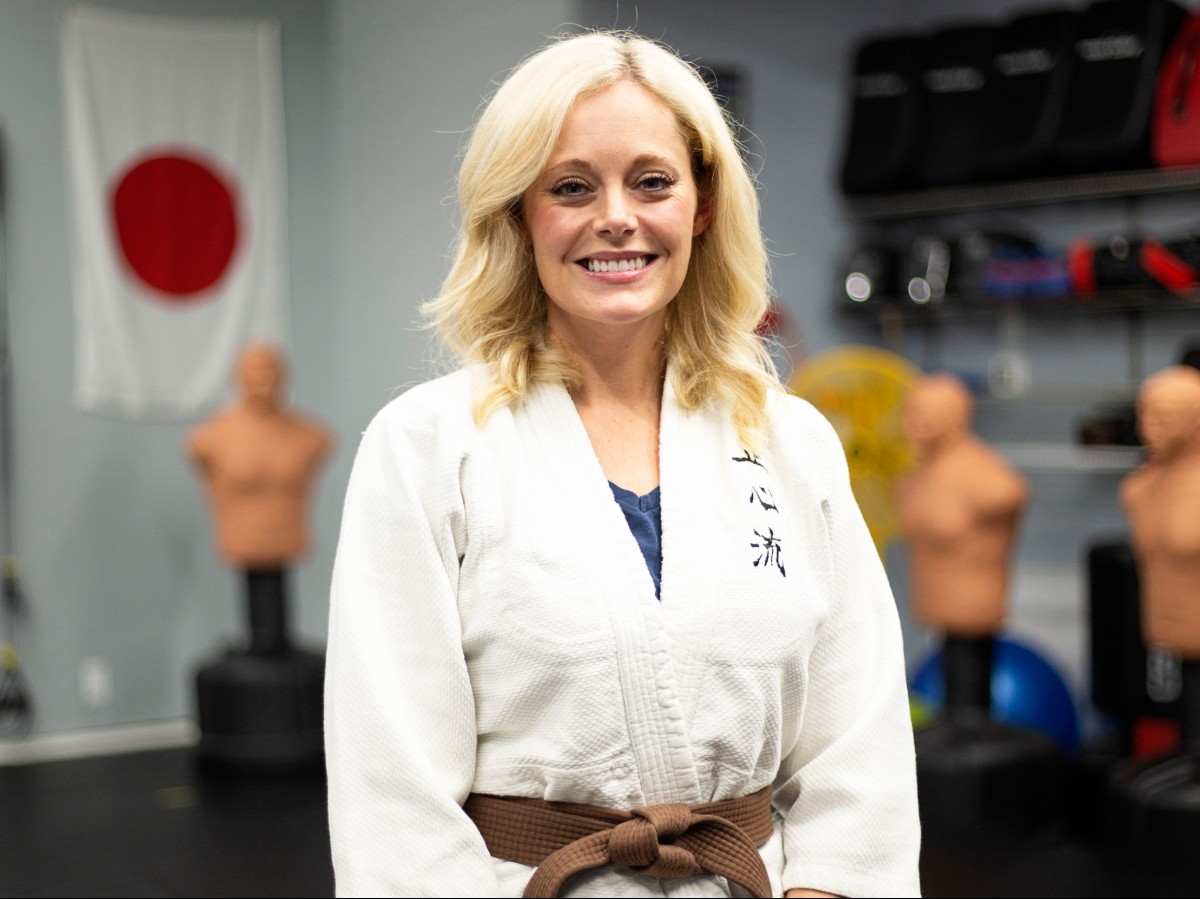 ESTHER KURTZ lives a double life. By day, she’s the chief of anesthesia at Scotland Memorial Hospital. By night, she’s a martial arts instructor who can take down a 250-pound opponent—and she teaches other women, and men, how to do that, too.

Kurtz’s love affair with the martial arts began at age 15 when her family took up the practice. Her passion for the art never waned, and in 2011, while completing her second undergraduate degree at the University of North Carolina Wilmington and serving as a critical nurse, she started training with Shoshin Ryu North Carolina located in downtown Wilmington.

After earning her graduate degree and becoming an anesthetist, Kurtz began teaching at the school. In 2019, she also started the school’s free, monthly self-defense class.

Kurtz maintains that martial arts and self-defense are not only good habits to incorporate into one’s life; they are also life-changing for women.

“Women know that half the world’s population can kill them with their bare hands,” she says. “That has an ingrained impact on how women interact in daily living and the workplace. I want to level the playing field.”

In fact, Kurtz attributes her professional success to the skills she gained through martial arts. She says she learned to be assertive yet humble, traits that served her well when she joined a department of competent, competitive anesthetists. A year and a half later, she was made their chief.

The school’s martial arts classes draw primarily from jujitsu and focus on self-defense. The martial arts techniques take no physical strength—students learn how to influence others with the least amount of effort, so you don’t have to be strong to do it—Kurtz says.

However, students who wish to can get a good workout and a strong, supple body with the practice’s drills and repetitions. After all, you want to maintain physical conditioning so you can outlast or outrun your attacker, Kurtz says.

Kurtz’s self-defense classes prepare students mentally as well as physically. The curriculum includes: getting into the mindset to fight, how to avoid dangerous situations, safe habits to adopt, what to do if you can’t avoid a situation, strategies victims can use in any situation (such as aiming for soft spots like the eyes ), and how to fight an assailant and escape.

Students actually practice handling different types of attacks, so they know what it feels like to be grabbed and what to do, Kurtz says.

“Our students learn that if they are assaulted, they aren’t a victim,” she adds. “Their attacker is an opponent. This attitude gives helps victims recover from an attack more intact and with less mental trauma.”

The school recently reopened after complying with COVID-19 closure requirements. However, it is taking numerous safety precautions: classes are limited to 10 people, temperatures are taken, masks are mandatory, and fans are kept running and doors are kept open. For those staying home, staff put free demonstrations and a self-defense guide online.

For Kurtz, self-defense means taking care of yourself in the safest way possible but being ready and able to fight if you have to. As such, she invites her students to adopt and live by her credo.

“We’re too pretty to fight. We’re also good at running away. But if we have to fight, we will win.”