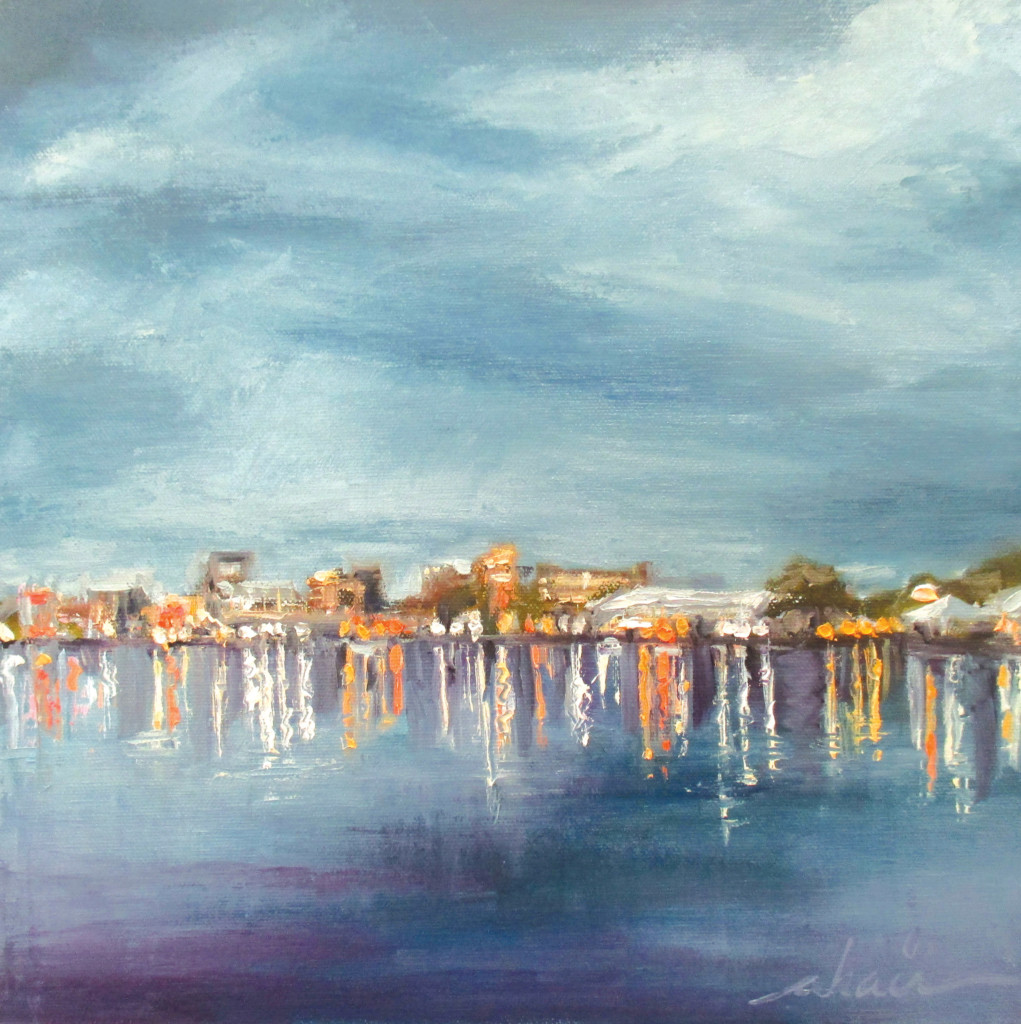 An art show through November features the works of four local artists and their take on some familiar spots.

Admission is free, and a portion of art sales and an original work raffle benefits Lower Cape Fear Hospice. Here is a little about each participating artist.

Joanne Geisel is a faculty member of the Cameron Art Museum’s Museum School and has taught at other venues such as the Franklin Square Gallery in Southport and the Community Arts Center in Wilmington.

For the Take Four show, Geisel painted in a “contemporary realism” style for her Wilmington scenes, which included depictions of boats, fishermen, and other aspects of coastal Wilmington. Additionally, she added abstract components to her paintings.

For Geisel, the Lower Cape Fear Hospice holds a personal connection to her life.

“My mother was there for several days at the end of her life,” Geisel says. “I was deeply impressed by the care and respect given to her and each family and friend who visited.”

Geisel’s work can be found at joannegeisel.com.

Gale Smith studied with Robert Longley at the Cape Cod School of Art in Provincetown, Massachusettes. Additionally, she has attended workshops with nationally acclaimed artists such as John Poon, Charles Reid, and Morgan Samuel Price.

For Take Four, Smith is excited about the collaboration project she and her colleagues did for the show, which is a scene from the hospice garden. They worked with various mediums, including oil, copper, and inks.

“We live in an area with tremendous historical value and beauty,” she says, “and we wanted to select venues that people could relate to.”

Smith’s work can be found at galesmithart.com.

(Read more about Smith, who is a finalist for this year’s WILMA’s Women to Watch Awards, on page 24.)

Ann Hair is a founding member of PAINTPlein Area in the Raleigh-Durham-Chapel Hill area and is part of several other art organizations, such as the American Impressionist Society, Oil Painters of America, and American Women Artists.

Hair found inspiration for her artwork from volunteering with the Wrightsville Beach Sea Turtle Project.

“There is inspiration everywhere, from our stunning beaches to beautiful gardens,” Hair says. “I’m fortunate to call Wilmington home.”

Hair’s work can be found at annhair.com.

Barbara Bear Jamison is a fourth-generation Wilmington native, and part of several professional art organizations, such as the Marine Arts Guild, PAINT NC, and the Wilmington Art Association.

“It’s a joy and privilege to paint in our beautiful hometown,” Jamison says. “I love seeing Wilmington’s views from four different perspectives.”

Jamison’s work can be found at barbarabearjamison.com.