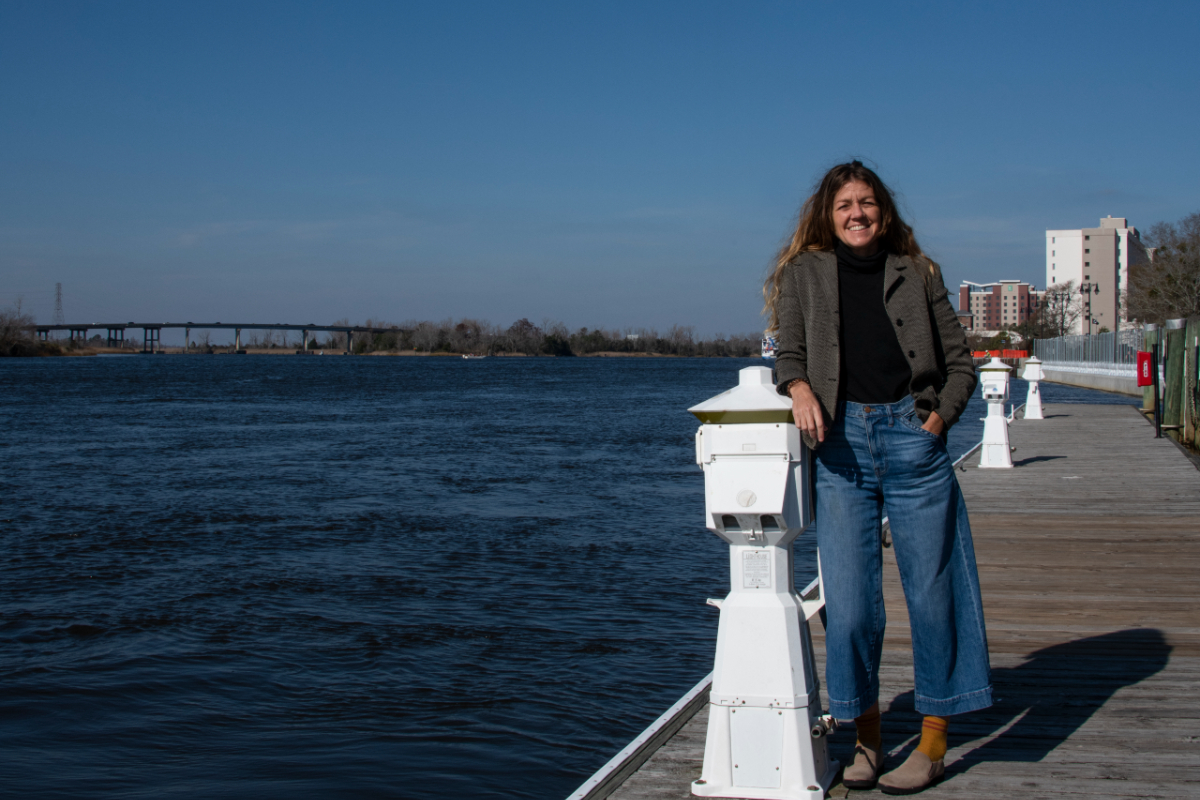 If you want to be hopeful about the future, do something for the good of the world. That’s the mantra of DANA SARGENT, executive director of Cape Fear River Watch. “You can’t remain hopeful if you’re inactive,” she says.

The organization she heads is plenty active, its work promoting the health of the Cape Fear River and all the aspects of area life that the river flows into. She and river keeper KEMP BURDETTE supervise a team of five full-time and two part-time environmentalists.

“I’m extremely proud of the team Kemp and I have pulled together,” Sargent says. “It is an amazing bunch of humans, so driven and motivated; they work well together. This year we have picked up more trash (in area waters and riverbanks) than ever in our history. We have overhauled our education programs and held camps.”

Burdette, who to many area residents is the face of Cape Fear River Watch, focuses much of his attention and efforts on education, advocacy, and cleanup, helping the public understand that the river’s good health affects the health of the entire environment and the people who live here. The organization’s efforts include working with the U.S. Army Corps of Engineers to design and build rock arch rapids: “ladders” that allow fish such as sturgeon and striped bass to swim upriver to lay their eggs.

“A year ago, we finished the $1.4 million (rock arch) project at Lock and Dam #1. It’s done,” Sargent says. “Now we’re tagging fish and monitoring those tags. Are the fish getting over the rock arch rapids to get to their historic breeding grounds?”

Sargent, who began her work with Cape Fear River Watch at the beginning of 2019, came to that role in a way that reflects a river’s journey: winding and growing as tributaries flow into it.

She earned an undergraduate degree in journalism with the goal of becoming an environmental reporter, but moved into that job market as traditional newspapers and magazines were dying, beats and budgets were being slashed. So, she, her husband, and young daughter moved from California to Washington, D.C., with the hope that she could find environment-related work there.

She landed a communications job with AARP but remained convinced that the environmental and conservation fields were where she wanted to be. To prepare, she got a master’s degree in environmental policy at nearby Johns Hopkins University but couldn’t land a job because she had no experience.

So, in another bend in the career river, Sargent and her family relocated to the Wilmington area, where her husband could continue to work as a field engineer for a hospital equipment company, and she could work remotely for AARP. And she could immerse herself in the environmental opportunities and issues of the Southeastern U.S.

“I volunteered for five organizations while continuing to work for AARP,” she says. One of those was Cape Fear River Watch. She also did some freelance and garnered a one-year contract with the Southern Environmental Law Center, putting together their successful opposition to the N.C. Legislature’s attempt to reclassify some portions of the Lower Cape Fear River as “swamp.” Successful reclassification would have eased pollution standards and removed those stretches of river from the state’s “impaired waters” list.

Meanwhile, Sargent’s involvement with Cape Fear River Watch increased. She joined the board, then was tapped as its president. When the executive director position came open, she was hired.

Roughly two years earlier, revelations had surfaced about Chemours’ dumping of per- and polyfluoroalkyl substances (PFAs) into the Cape Fear River. Besides being Cape Fear River Watch’s primary administrator, Sargent’s principal role in the organization was to lead advocacy and education efforts to combat production and dispersion of the toxic chemicals and to educate the public about the threat to environmental and human health they pose.

“It’s everywhere,” she says of the substances. “They’ve been found in polar bears in the Arctic. In rainwater across the globe. And yes, in microwave popcorn. An EPA researcher told me we don’t talk enough about microwave popcorn: PFAs are in the coating and the packaging.

“But PFAs are invisible and in so many things: it’s likely in most things with a coating, especially if they are slippery or water-resistant. But it’s hard for people to be willing to change their behavior for (a threat) they can’t see.”

Rather than trying to tell people to boycott PFA-containing products, the efforts of Cape Fear River Watch and consumer-protection organizations are focused on getting the federal government to regulate and change the practices of corporations whose products contain PFAs. They have had some success: two big home improvement chains no longer sell Scotchgard-coated carpet. Some fast-food chains have eliminated packaging that contains PFAs.

Still, Sargent says, Chemours has applied for permits to increase its production, so the battle continues. But she believes that, as an environmental advocate, she’s doing what she’s meant to do. She urges others, regardless of their channel in life, to “get out there and do something.”

“Walk around your neighborhood and pick up trash. Every piece of trash in the street ends up in the storm drain, which takes it into the river and then into the ocean. We all have to remain hopeful and get active and work together.”