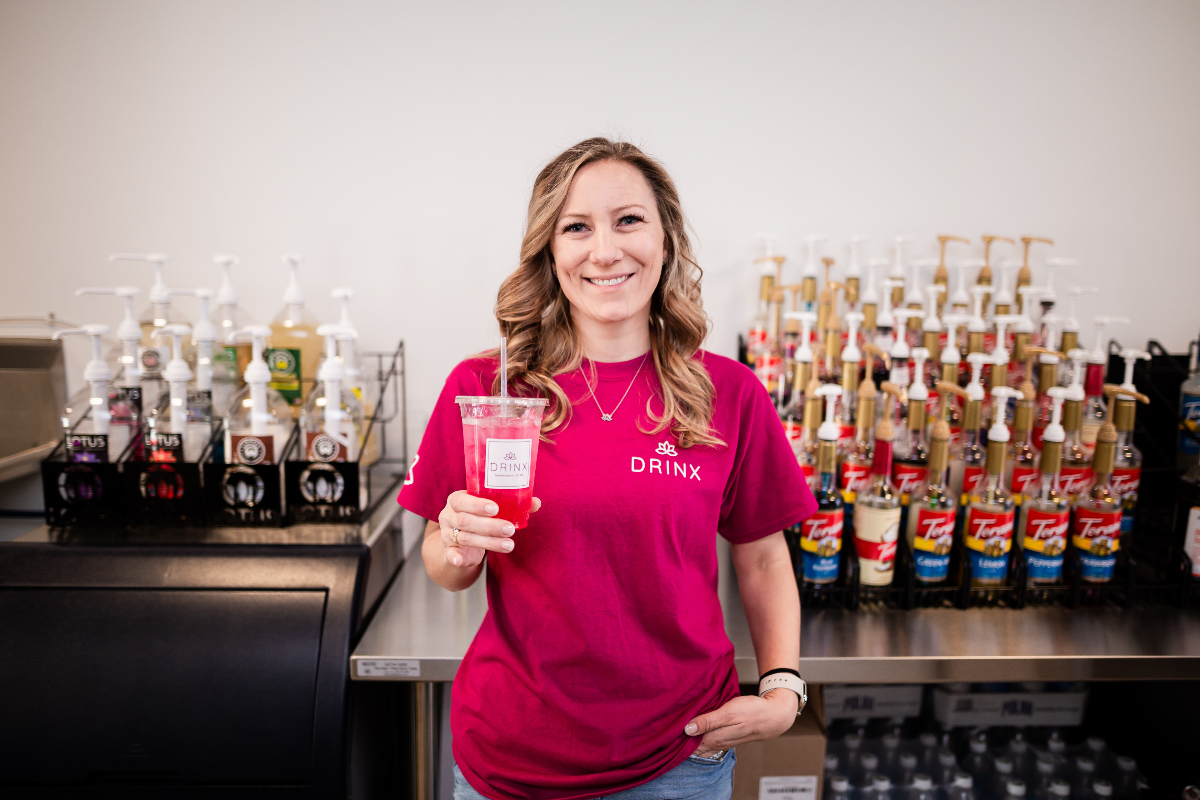 APRIL WALKER, owner of DRINX, is giving Wilmingtonians a way to get the energy rush of a strong cup of joe without the nervous shaky feeling that often accompanies a hit of caffeine. In fact, even though many of her drinks are based on coffee beans, they are downright good for you. Even more important, the drinks taste really good–so much so that customers are constantly surprised when they take their first sip.

DRINX’s hand-crafted, plant-based libations combine cascara, which is the first stage of the coffee bean, with other high-octane ingredients like lotus flower extracts and super fruits.

“We offer something that is truly healthy,” Walker says. “The body can process our drinks, and you feel better after drinking them. You’ll feel energized and focused, but you don’t have the jitters and you won’t crash later.”

To round out its mix of healthy options, DRINX’s grab-and-go menu also includes fruit and veggie sticks; acai bowls; salads; and vegan, veggie, and regular wraps.

DRINX is a testament to Walker’s resolve not to give in when life turns upside down. Both Walker and her husband lost their jobs at BB&T when it merged with SunTrust to form Truist. To replace lost salaries, Walker entered the world of entrepreneurship. She started a dog sitting and concierge business but soon decided she wanted a brick-and-mortar shop.

Since Walker has always enjoyed visiting tea rooms and coffee shops, opening a cafe seemed right for her next business endeavor. To do so, she pulled from her knowledge of healthy eating–gained through bringing her husband back to health after nearly losing him during surgery–and her own flair for creating tasty drinks.

Walker decided to specialize in the types of drinks she likes, which tend towards refreshers and syrup-based drinks. After perfecting her recipes, she gave them a trial run by setting up a stand in her driveway and serving them to neighbors for free or a donation. That bit of market research gave Walker all the proof she needed to move ahead with the cafe.

“My drinks were such a big hit, I knew they would take off,” says Walker.

Once Walker landed a spot in the Cargo District, her first choice for her cafe, she forged ahead. Walker admits that she knew little about running a business, but lots of people were more than willing to give her a hand. Those who had business experience offered advice, neighbors helped stock the cafe, and students from the University of North Carolina Wilmington, such as a budding photographer, lent their skills to the endeavor.

For Walker, the risk has been well worth it. Though DRINX has only been open since early December, it already has a steady clientele and Walker is already thinking about the next steps for DRINX. She hopes to get local grocery stores to carry her drinks and then to open a second store.

Having weathered the loss of her job, Walker remains optimistic about DRINXs future– no matter what curveballs may come her way.

“We (Walker and her husband) just came in here and did this,” she says. “We’ve been winging it, and it’s worked out. As long as I’ve got my husband by my side, I can make it.”