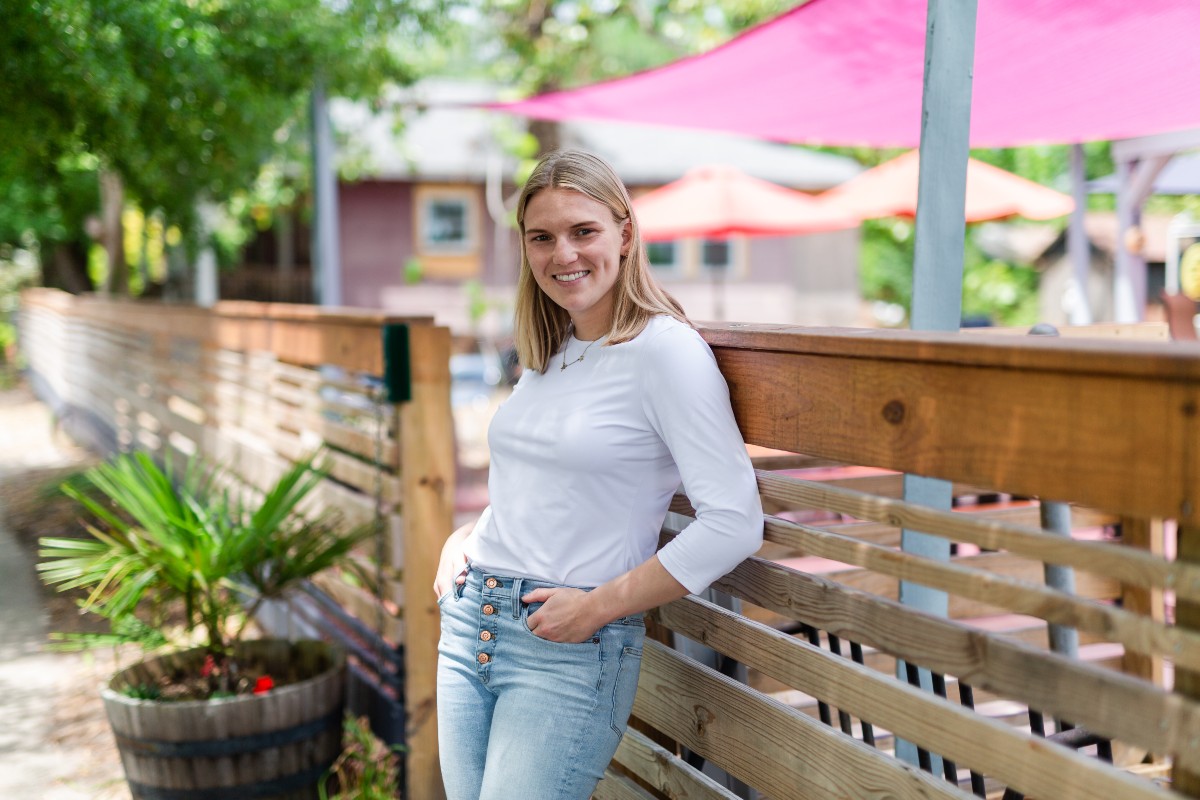 Wilmington native LAURA BRATTON loves to tell stories. Stories of everyday people through the live voices of those everyday people. “I grew up with a sense that the environment, politics, and culture to the coastline of eastern North Carolina was a place of lifelong learning and inspiration,” says Bratton.

Along with SARAH SLOAN, Bratton is co-director of “Shoresides,” a nonprofit civic journalism lab that produces stories and news to rural and low-income communities in coastal North Carolina.

“We cover everything from rural arts to environmental justice to hot topics for teens in our podcasts,” she says.

A graduate of the University of North Carolina (UNC) Chapel Hill, Bratton holds a bachelor’s degree in economics and is currently enrolled in a master’s program at the Craig Newmark School of Journalism at City University of New York. She vividly recalls listening to her first podcast in a UNC policy class.

“The story focused on a desegregation program in Missouri in 2013. I was inspired by the instant connection I felt to the story’s characters when I listened to, rather than watched, their stories. The removal of the screen, headphones in my ears, the medium of audio brought an intimacy to storytelling I hadn’t experienced before,” Bratton says.

But it was Hurricane Florence that was her tipping point. After watching Wilmington flood on local, state, and national news channels and helping her mom clean out her ruined apartment, she knew she wanted to be a community storyteller.

“I wanted to take part in amplifying the voices most impacted by the storm.” She collaborated with hurricane survivors to gather stories in small towns like Burgaw and Whiteville. Over the next year and a half while interning at Working Narratives, a Wilmington social justice organization. Bratton documented these stories in a two-season podcast called Storm Stories.

“Producing Storm Stories, I met people from across the coastal region with a wealth of stories. I was inspired by their stories and began to think about launching what would become ‘Shoresides,’” Bratton recalls.

At the start of the COVID-19 pandemic, Bratton and Sloan decided to take a deeper dive into the idea of producing local stories. “We wanted to create a sense of community, address our region’s inequities and help build a healthy media ecology,” Bratton says. And “Shoresides” was born, fittingly named after the region from where the stories would come.

Bratton and Sloan also produce Shoresides News, a newsletter featuring interviews with real people, and their vital stories impacting the region through fresh perspectives and voices.

“I get my story ideas from consistent, continued collaboration with community partners. Relationship building is key to sharing meaningful stories that build community power,” says Bratton. “We have a strong focus on amplifying voices of the most vulnerable communities.” Topics explore environmental justice to police brutality to women’s empowerment.”

Bratton says, “Many rural communities across the coastal region of North Carolina don’t see themselves in mainstream media coverage. It’s empowering to see ourselves in the stories that are shared about our community. Those closest to the problem are closest to the solutions.”

The shows are available on their website, and Apple Podcasts, Spotify, and other podcast apps.

Bratton concludes, “I want people to understand the importance of collaborating with communities rather than telling their stories for them. Media is one way for those voices to be heard by the policymakers who create the laws that impact their lives.”