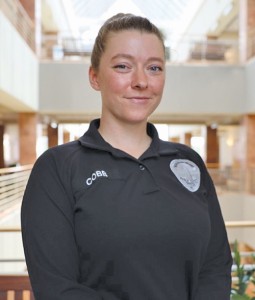 Cobb was among the recent group of twelve graduates from the Cape Fear Community College program.

Originally from Alaska, Cobb attended the University of Alaska Fairbanks. After moving to North Carolina, she went through the Winston-Salem Police Department’s basic law enforcement training and worked there for five years.

Following her family to the coast, Cobb started with Bald Head Island’s Department of Public Safety part time while adding certifications for other emergency roles in order to join the agency full time.

On the island, public safety officers who work for the village are certified in law enforcement, firefighting, and EMT/paramedic, so Cobb went to EMT class and the CFCC’s Firefighter Academy.

“I didn’t know anything about fire before the academy,” Cobb says. “It was one of the hardest things I’ve ever done. The physical demands were eye-opening, but it was so rewarding.”