Local resident PATRICE WILLETTS has amassed a large Christmas ornament collection. It wasn’t that she went out and started buying them. They belonged to her mother, who made every one. 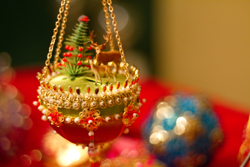 “We didn’t start collecting, she just started creating,” Willet says. “She quit smoking and always had to have something going with her hands. She did needlepoint and these ornaments. Places like Michaels, years ago, you would find kits like this.”

With the holiday season on us, Willetts shares her mother’s ornaments with WILMA and the stories behind them. 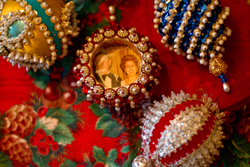 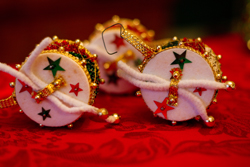 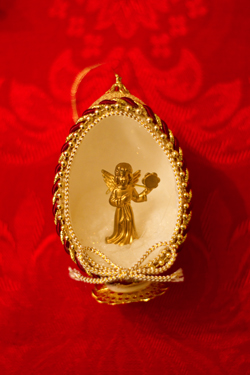 W: How many did she make at a time?

PW: There was one new one each year, but then if she had extra time she’d do some of the little ones. She’d make about five every year and then give them out. My aunt would make them also, and they would exchange. They’d go shopping together and find the kits, and then they would try to outdo one another on how beautiful they could make them.

W: What was her process?

PW: Every ornament is beads and straight pins with a pearl at the top of the head. She’d put all the beads on the pin and dip the pin in glue before she’d put it in the Styrofoam ball. You only had one shot at it. Sometimes she went through a number of Styrofoam balls because she didn’t have the pin lined up just right. It had to be just right. She could do one in a night. She just had a chair in a corner and a stack of little drawers and all the pins were in there.

W: Why was this time of year so important?

PW: Christmas was a big thing. It just always was. It brings the family together. It amazes me how you could fit twenty people around a small dining room table, and everybody had a great time, always happy to see each other. We would go to mass on Christmas Eve, and being Italian, we always had fish and she would make olive soup. She was a very good cook. 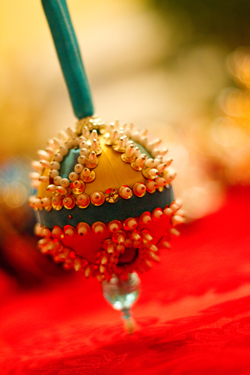 W: Do you have a favorite story or memory from a childhood Christmas?

PW: When (my parents) were first married, the year I was born, they couldn’t afford a nice tree.  Dad went and bought two skinny, decrepit trees and cut the branches off the one, drilled holes in the bark of the other, and filled in all the bare spots, and we had a beautiful tree.

W: Which one was your mom’s favorite ornament?

PW: The Disco Ball. My dad was responsible for all the fun at the VFW, and he always had the disco ball going. He made sure all the colored lights were burning properly. So when she saw this one, it reminded her of the disco ball so she made it for him. And this is the one he made sure was on a motor so it went around when it was on the tree.

W: You lost your mom, Gloria, to cancer in 2012. How did you deal with the first Christmas without her?

PW: The year she was sick, it was beginning of February, and her tree was still up so I told her I was gonna take down her tree. As I was packing up the tree I was picturing my mother, the following Thanksgiving, unwrapping it and saying ‘OK Patrice, you didn’t break anything, you did a good job.’ I had her in mind that she would still be with us the following year, but she wasn’t. So last year when we decorated the tree, Victoria (my daughter) helped. I said ‘I need help. I can’t do this by myself this year, but we’re gonna do it.’ I took my ornaments and her ornaments, and we had fun. We made it OK, but she was a big part. 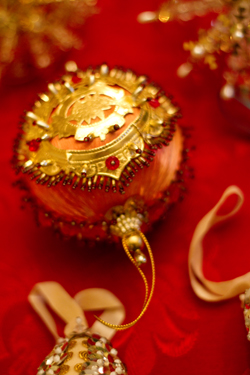 W: Which one is your favorite?

PW: The ones with the wedding pictures, the little red round ones. Those are just so special. They were a surprise. She always did something to make me cry. One year, she got a metal box, painted it green, and in gold pen wrote my name and ‘love mom’ and inside, handwritten, were all of her recipes so I’d always have her handwriting.

W: What are some of the traditions you share with your daughter, Victoria?

PW: We put the tree up on Thanksgiving, we start cooking, we watch the Macy’s Thanksgiving Day Parade, we wait for the Rockettes, and then we cry. Well, I cry, and then we get back to eating and cooking and making a mess. On Christmas Eve, we give gag gifts to one another. Just a little something to surprise you, make you laugh, make you realize, make you remember, make you know that throughout the year someone was thinking of you. It’s always just a fun thing … Christmas has to be fun.