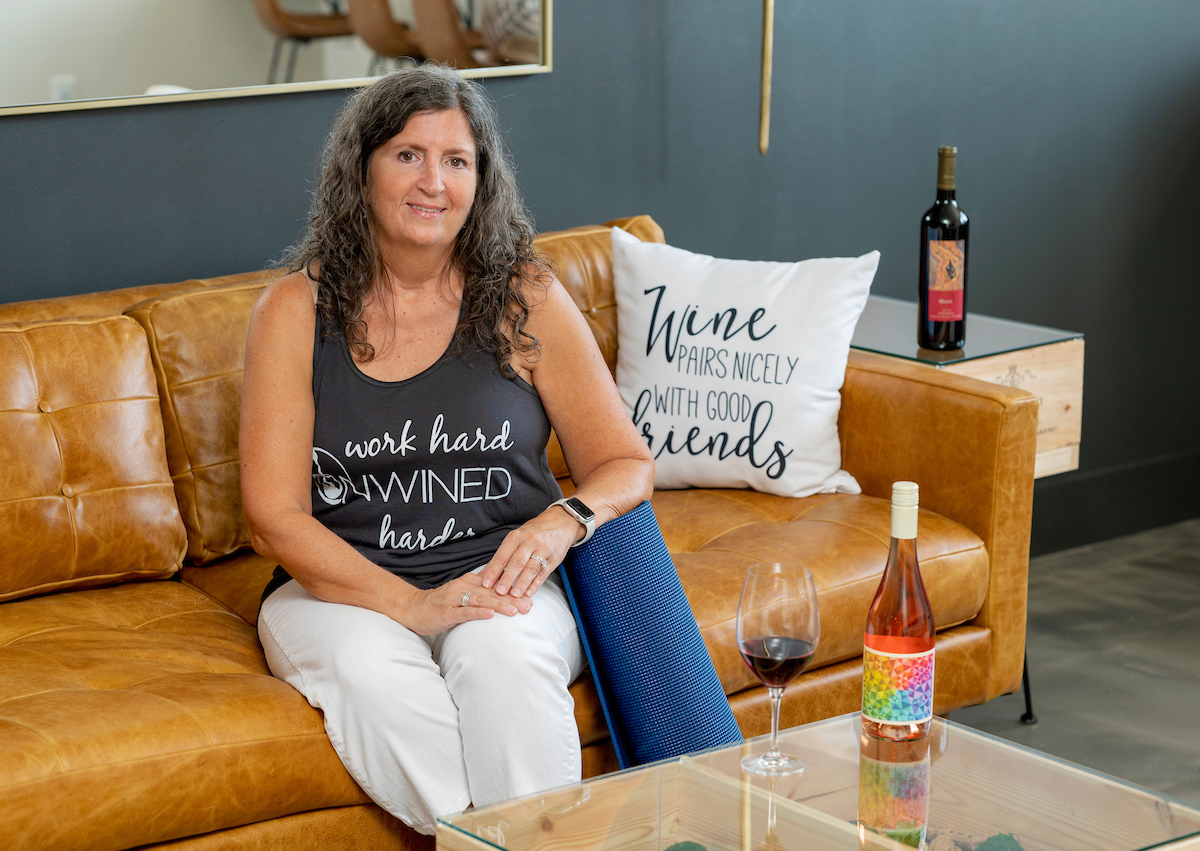 In 2012, When AMY BURKHARDT and her family relocated from Ohio to Wake Forest, North Carolina, Burkhardt knew she no longer wanted to practice law and instead open a business. Mixing her and her husband’s love of wine and craft beer, the idea seemed easy, but she wanted to add one more element.

“At the time, our oldest daughter JANA was pursuing yoga teacher training and we decided to merge the two concepts together. I pursued my level 1 sommelier training so I could feel like I was competent in wine, and I wanted to dive deeper,” Burkhardt says. “The inspiration was the overriding theme of relaxation, but beyond that was community.”

Unwined in Wake Forest quickly became a neighborhood staple. Those attending a yoga class could have a glass of wine after, meet other classmates and form friendships. “There’s an opportunity for connections to continue, even beyond yoga. There are customers who also just want to hang out and have a beer. We have built a great community of people that like both,” she says. “People have gone on their first date, just to enjoy some wine, and ended up getting engaged on our rooftop. We’ve even had a wedding. That’s the unique and special part about who we are, what we do, and what we hope to bring to Leland.”

The Burkhardt’s chose Leland for their second location due to the influx of new residents coupled with the area’s lack of yoga studios. Unwined on the Square’s beer and wine lounge is open seven days a week with patio and indoor seating options. Daily yoga classes include vinyasa, power flow, flow and yin, and gentle yoga and meditation. Burkhardt is hoping to recreate a sense of community in Leland while still offering the total package: Exercise, relax, unwind.

“The Leland Lady Runners do a run club here every Thursday, after their run a yoga teacher leads them through a stretch and they tend to stick around and enjoy some social time. We love to work with groups and do those types of events,” she says. “We’re located on the first floor of Harrington Square Apartments, so it’s nice for the residents to get off work, walk over and enjoy a glass of wine or craft beer.”

For their beverage options, the Burkhardt’s have a mix of regional and local, including Edward Teach Brewery, Mother Earth Brewing, and Panacea Brewing Company. On the wine side, Burkhardt is well-stocked with red wine and summer favorites like sauvignon blanc, prosecco, and vinho verde.

“We’ll soon be adding live music, tastings, and food trucks on the weekend,” she says. “I also have been working with Whimsy + Wylde Charcuterie on small charcuterie boxes for the wine tastings that will be for sale or pre-order.”

Unwined on the Square currently offers morning and evening yoga classes, four varietals of wine by the glass, and complimentary Friday tastings.