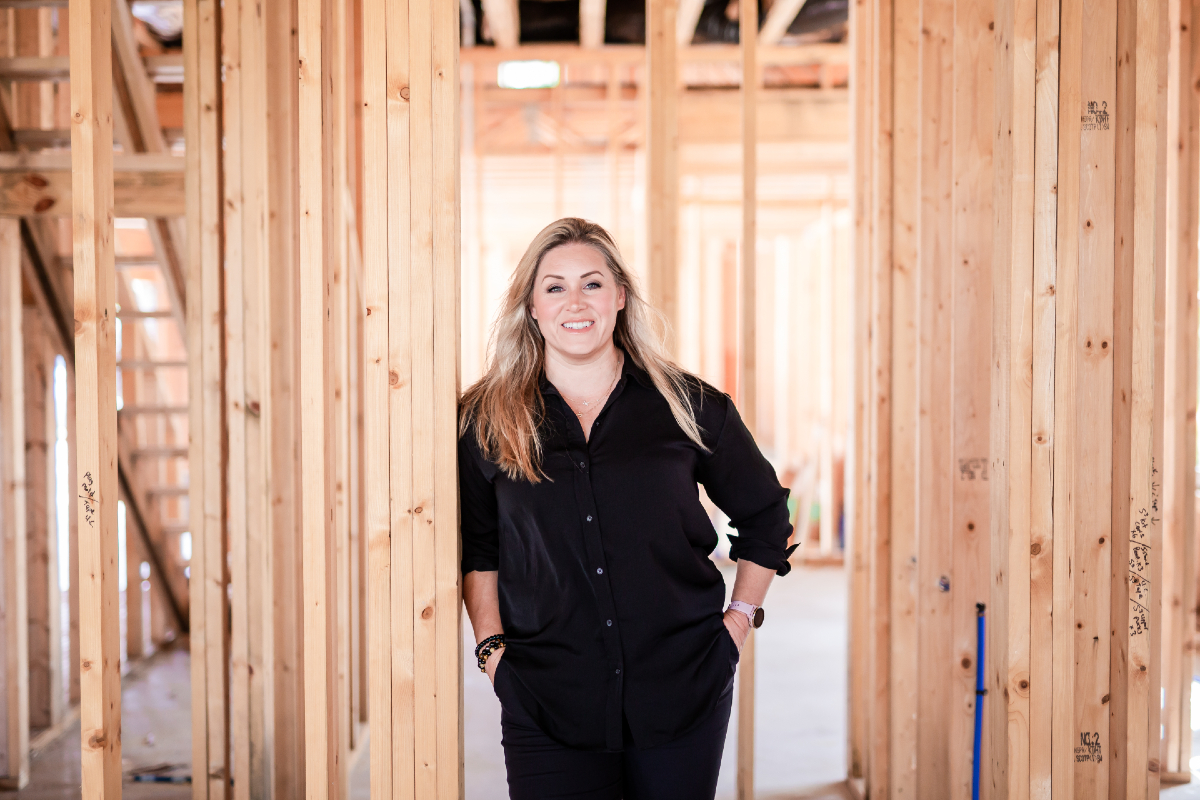 As a young girl, KATE EAMES, owner of The Anchor Group Design + Build and chair of Cape Fear Professional Women in Building Council, was hooked on the television show This Old House and dreamed to be show host Bob Villa. Her mother emboldened the dream by taking her to Home-a-Rama, the annual parade of homes in their hometown outside of Richmond, Virginia.

“Growing up, I enjoyed everything related to home building and design. In art class, I’d draw floor plans and build small house renderings. I would clip pictures of windows, doors, and exteriors of houses from magazines to glue to my renderings,” Eames recalls.

Encouraged by her father, Eames attended Old Dominion University to study civil engineering. “My father provided the courage for me to enter this field knowing that I’d be one of few women,” she says.

Eames was constantly proving she had the same right to study engineering as her male colleagues. Even getting a first job proved to be challenging. Eames remembers door-to-door job hunting in early 2003 getting an offer to join the company softball team, go on a date, and even arm wrestle for a job, but no engineering job offer. She took some graduate-level courses, subsequently landing a role with an engineering firm in New York. And then a visit to Carolina Beach sold Eames on coastal living. She relocated and spent the next nine years performing forensic engineering investigations providing expert witness testimony for litigations.

“I loved this job,” she recalled despite having to “grow thick skin,” as opposing attorneys would spend hours questioning her credentials yet only minutes questioning male witnesses’ credentials.

Eames’s genuine love of construction moved her onto a project manager role with Wilmington-based PBC Design + Build in 2017. “It was exhilarating, empowering, and exhausting,” she says. “To build someone’s home is a privilege and labor of emotional investment. Finishing a house for a happy, excited, and appreciative client is the best.”

Eames says that about a year ago she had an epiphany. “I’m fully capable. I don’t need to work for anyone else and I have the confidence to start my own business.” This past June, Eames opened The Anchor Group Design + Build, a female-owned construction company that provides new home builds, remodels, custom builds, renovations, and project consulting.

Owning her own company gives Eames the power to choose her projects. “It allows me to continue doing what I love with the flexibility of being available for my family,” she adds. Eames has three children ages 10, 9, and 7. She hopes she can be the inspiration for other women to take a similar leap.

Eames, who is a licensed professional engineer in both North and South Carolina, credits her success in starting The Anchor Group to many things she learned at PBC, including building, estimating, scheduling, and logistics. “I learned the importance of relationships,” she added acknowledging her subcontractors who help facilitate projects.

Eames is the chair of the recently organized Cape Fear chapter of The Professional Women in Building (PWB) Council, giving women a voice in the building industry. Eames was nominated by a panel of her peers and accepted the leadership role in the local chapter after continuing to experience exhausting struggles to prove her worth.

Under her leadership, the chapter announced its bold mission: The Cape Fear PWB chapter is a pivotal group in empowering and supporting women in the building industry through connections and outreach.

“It can be intimidating for females to enter this industry, especially when they don’t see females paving the way,” she says noting that less than 3% of the construction boots on the ground, builders, and project managers are female. “I know I’m not the only woman who experiences the constant qualifications challenges. It’s the major reason why my mission to normalize the construction demographic is so important to me.”

Eames concludes, “I’m fortunate that I love what I do. It’s allowed me to succeed. I hope the council grows, bonds, and gives back to our Cape Fear community for years to come.”