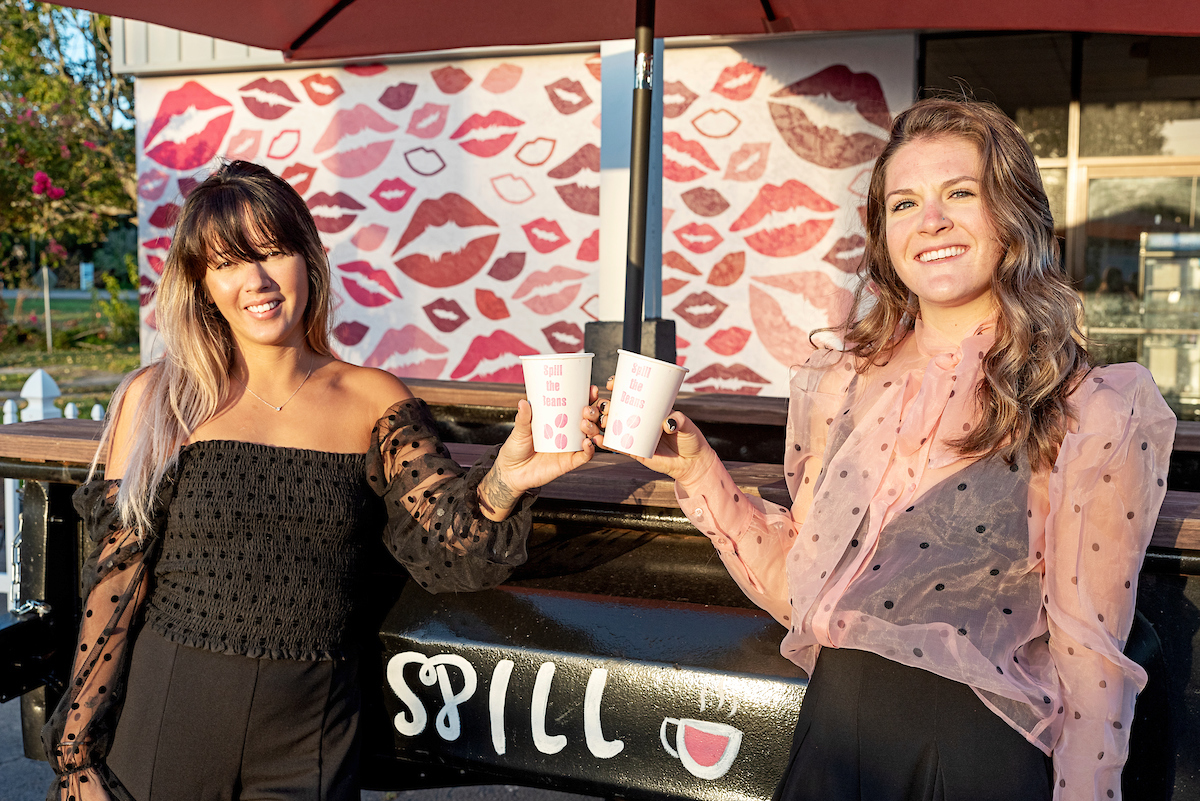 Offering therapeutic lattes “straight-up good for your soul” is what sets Spill Coffee Co. apart from its caffeine competitors, according to co-owners AMBER LEGATES and VICTORIA LIGHT.

The business, which began as a mobile coffee cart born out of a found Chevy truck bed, now has new digs in front of a brick-and-mortar storefront at the former Old North Coffee spot.

Legates and Light cooked up their idea for the business when working together at the well-known Poe’s Tavern in Wrightsville Beach. Both had lived in southern California, where mobile coffee carts were popular. They separately found their way back to the Wilmington area and became friends.

“We love coffee,” Light says. “We would always bring each other coffee when we worked at Poe’s. We would hang out at coffee shops.”

Soon they were dissecting what they liked and didn’t like about the coffee they drank and the shops they visited. They wondered where the coffee came from.

In February of 2019, Legates visited her dad in California, again scouting coffee shops. While there, she noticed a newcomer to the coffee scene, therapeutic lattes, which she says contain more than espresso and sugar; they also have ingredients with healthful benefits such as turmeric, collagen and even CBD. She returned to Wilmington inspired to start the business.

Soon the pair’s ideas began to percolate and they sat down to make more concrete plans.

Light and Legates considered roasting their own coffee, but they knew that would be a time-consuming process so they’ve collaborated with Java Estate Roastery in Holly Ridge.

Inspired by a Pinterest photo of a Chevy truck bed converted into a flower cart, they set out to try to do that. Light’s long-term boyfriend found a similar bed in Leland and hours later it was delivered to their home.

Legates said they wanted to bring a “totally different vibe” to their mobile coffee cart. So, they dolled the truck up, garnished it with a pink umbrella and pink mugs, and installed pretty wood.

The mobile business opened in June 2019 and they did their first popup with Port City Produce. COVID-19 closed them last spring and they reopened in September. The mobile cart is currently in front of the storefront.

They’ve begun making renovations to the store and say when finished, it will be “an empowering female space,” adding that when they began the business, they were invited to lots of women-centered events and they want to share the support for female businesses.

The look and the company branding, they say, is a perfect blend of their personalities, a combination of business and fun, a bit pink, a bit grunge, and vintage with a modern twist. They gave these and other words to their friend, Wilmington graphic designer REGAN SIMON, who came up with their logo, which uses stylized letters and the S and P of Spill intertwine into a heart like graphic.

Besides more traditional offerings like coffee and espresso, it also offers special spills infused with a big dose of healthiness. For instance, The Witty is made of MCT (a supplement made from certain fats) and coconut oils, grass-fed butter, cinnamon, and coffee, which Light says is good for the brain and activates a sharp metabolism. They say the Bomb Shell, made with collagen, rose, oat milk, and espresso, is good for hair, skin, and nails. The Weeded It is made of full-spectrum CBD, house-made lavender, oat milk, and espresso.

In addition to the brick-and-mortar location, where Legates and Light enjoy chatting with their customers, they also continue to use the mobile cart to partner with local businesses for pop-up spills and parties and can be booked for events such as birthday parties and baby or bridal showers.

Spill’s customer demographics are primarily those in their 20s and moms in their 30s and 40s, as well. However, its brews are catching on with the older demographic, who is interested in learning about the CBD in their coffee and are also eager to support young female entrepreneurs.