When JORDAN CLINE showed up for the women’s cycling group at Blue Clay Bike Park on her “mom bike,” a Trek mountain bike sporting a child carrier, all she wanted was to lose some baby weight and get back in shape. That humble beginning led to Cline’s love affair with biking and her rise as fat biking champion.

Last year, Cline was a winner in the U.S. OPEN FAT BIKE BEACH CHAMPIONSHIPS, an annual fat bike race held in Wrightsville Beach. If all goes as planned, this year she’ll repeat her success in a more difficult category. The race will be held on March 23.

“I’d love to win it,” says Cline (above), “but there are some really strong women from out of town who are fierce competitors.”

Jordan will join more than 200 other fat bike enthusiasts. Mounted on bikes shod with oversize, four-inch-wide tires, the bikers must pedal through soft- and hard-packed sand and dodge obstacles set up along a one-mile loop. The bikers, who can compete as individuals or in teams, complete the loop as many times as they can.

The race has three categories: FAT, a one-hour race; REALLY FAT, a one-and- a-half-hour race; and SUPER FAT, a two-hour race. Part of the race’s proceeds will be donated to the Wrightsville Beach Foundation.

The race, now in its fifth year, is gaining popularity. It’s the only race in the U.S. in which fat bikes are raced on sand and draws competitors from as far away as California. Though the race attracted only a couple of women initially, the number of female competitors is growing every year.

“The race is a fun way for women to be in competition rather than on the sidelines, to be back in the game, to do something that’s motivating for you,” Cline says.

Cline finds the race both thrilling and challenging. She’s revved by the boisterous, cheering crowds as she pushes her burning muscles to continue pedaling through soft, punishing sand.

“It’s very exhilarating,” she says. “It pushes your physical capabilities. Then there’s the adrenalin, the crowds, the competitors. It’s the best of both worlds. It pushes you, but it’s exciting.”

Fat biking, whether for racing or recreation, is gaining adherents from children to grandparents because it’s flat-out fun. When you start pedaling a fat bike, it’s the best feeling, says SHAWN SPENCER , owner of Cycle Bike Shop and race director/owner for the U.S. Open Fat Bike Beach Championships.

You feel just as you did as a kid first learning to ride a bike.

Fat bikes also give you freedom. With those wide tires, you can explore places you couldn’t necessarily go when walking, jogging, or on a road bike. You can ride over drawbridges without worrying that your skinny tires will get caught in a grate. You can ride over trails or for miles on the beach.

“Fat bikes open up all kinds of avenues or places to ride,” Spencer says. “They are the ultimate bike for our area because they allow us to go on the beach at low tide and explore further than we can walking.” 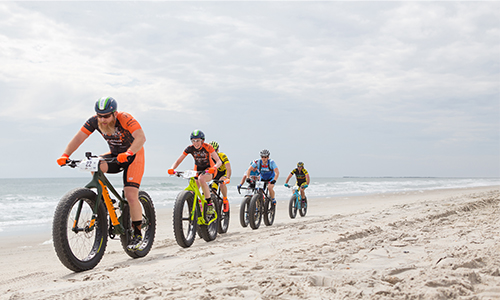 Fat biking also provides plenty of camaraderie. Cline says she’s met people from all facets of life through biking and counts some of her fellow bikers as her closest friends. In addition, area bikers are more than willing to share their expertise. It’s from them that Cline learned how to improve her technique – to navigate obstacles, ride slowly without falling, and keep her pedals flat when going over obstacles.

“The sport is full of people I respect,” she says.

With all the fun they’re having, it’s easy for fat bikers to forget they’re getting a great workout. In addition to cardio, Cline credits her sport with building abdominal, glute, leg, and even some arm strength – without stressing her joints.

“Controlling the bike when going slowly, biking through soft sand, and leaning when you’re racing provides a major core and leg workout,” she says. “I’m in the best shape of my life.”

Cline also likes that she can involve her family in her sport. Not only do her husband and three daughters cheer her on when she’s racing, they also hop on their own bikes and join her as she trains. In addition, the entire family enjoys camping/biking vacations.

Cline urges everyone to try fat biking, adding that it’s fun, whether biking for recreation or competition.

For race info and registration, go to fatcross. com. All are welcome to join a recreational bike ride on March 24.