A Sport For All Seasons

This women's soccer league gets in its winter kicks 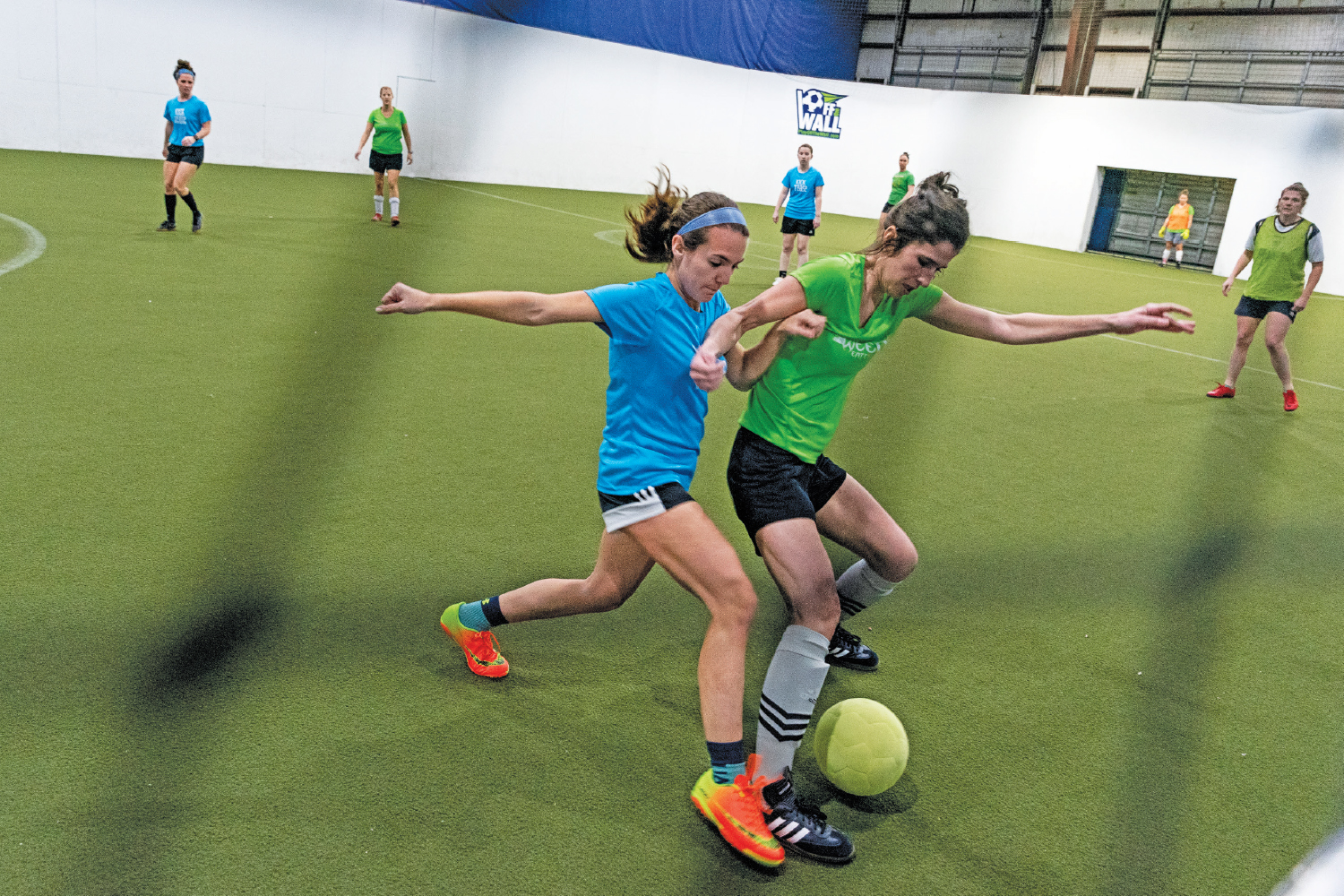 It might be a bit colder outside these days, but that doesn’t stop the Wilmington Women’s Soccer Association from bending the ball all winter long.

The team plays indoors at Off the Wall Sports in Wilmington from Thanksgiving through the end of February. Owner JANINE BLAISDELL welcomes the teams to play at her facility, which she became the owner of seven years ago.

The Wilmington Women’s Soccer Association offers women of Southeastern North Carolina an opportunity to play competitive ball and socialize. The idea to create a women’s league was spearheaded by JEAN CONWAY in 2005.

Conway was a member of an adult co-ed league that played on Sundays, operating through an organization known as Cape Fear Soccer. The women on the co-ed teams started looking for a way for women to play together.

After meeting with county parks offices, obtaining insurance, connecting with referees, and getting guidance from the North Carolina Adult Soccer Association, the first five teams of the league were formed. In 2006, the Wilmington Women’s Soccer Association was officially on its own.

“Some of the soccer community didn’t think we would make it as a league without support from Cape Fear Soccer. But, we are still here,” says past Wilmington Women’s Soccer Association President HEATHER STARCKE HORAK. “It’s been very rewarding to see how the league has snowballed.”

As of last fall, there were one hundred members, most from Wilmington, but some from as far as Hampstead and Sneads Ferry, says current Wilmington Women’s Soccer Association President JAYNE HERMAN.

Players range in age from eighteen into their forties and vary in skill level from women who played a little when they were younger to college players. Each team has ten to fifteen women. In addition to coming indoors for the winter, this past year the women also held an indoor summer league for the first time.

“I’ve played soccer my whole life. I played on the club team for my university, and then after graduating I played in recreation leagues in New Jersey,” Herman says. “So, when I moved to Wilmington, naturally I needed to find a league.”

Blaisdell played soccer in junior high and high school in Oregon. “As a girl if you were willing to put on cleats, you were on the team,” she re calls. At Rensselaer Polytechnic Institute, where she obtained bachelor’s and master’s degrees in engineering, she played soccer and ice hockey.

Blaisdell, a mother to three boys, especially enjoys the kids’ winter leagues. “I enjoy watching the kids grow as athletes and people,” she says.

“It is great that they take care of everything from scheduling to referees, and it gives us a way to keep playing in the winter,” she says. “They have been really accommodating.”

Both Herman and Blaisdell agree on the benefits of playing soccer.

“For starters,” Herman says, “soccer is more fun than going to the gym! I’ve also just met some great ladies who have become friends. And, it’s great to keep playing in the winter when it gets a little too cold outside.”

Blaisdell adds, “Indoor soccer is a lot different than outdoor soccer. The pace is much faster, the ball is hardly ever out of bounds, there is no weather or rainouts to worry about, and the schedule is set and rarely changes. And, in the summer, we have air conditioning.”

Herman encourages everyone to come try it out. “All the teams are really nice and welcoming. We have such a variety of skill levels, and everyone is welcome,” she says.

Blaisdell points out that the Wilmington Women’s Soccer Association is unique.

“In addition to the physical workout, the women form friendships, and they enjoy each other’s company,” she says. “There are far more spectators at women’s games than at men’s games. In a society where girls are told to be cheerleaders and support the men, it’s great to see husbands, boyfriends, and kids supporting mothers, girlfriends, and wives.

“The women compete hard,” she adds. “They want to win. And, they are in touch with each other and what their lives are like outside of the field after the game.”