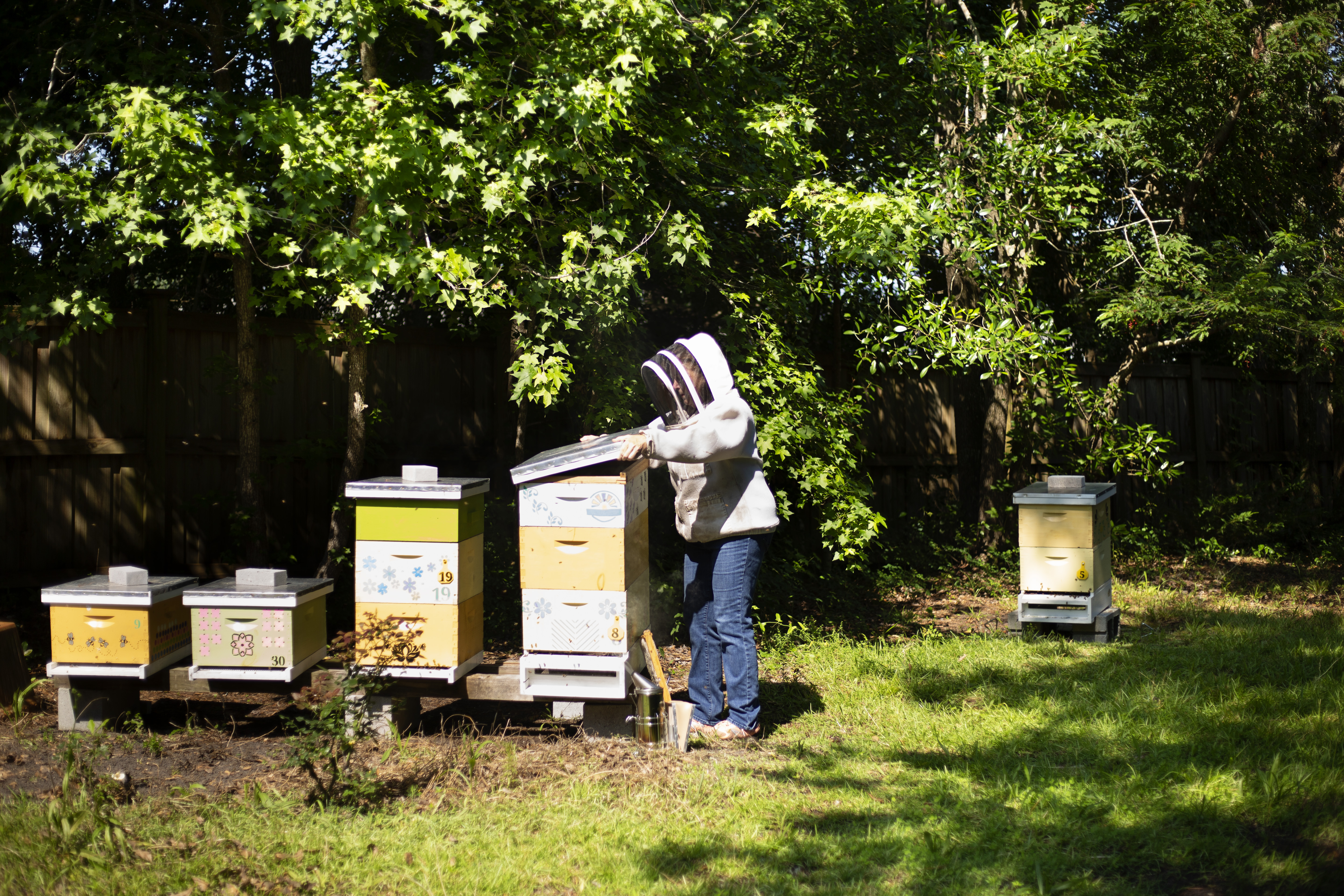 While most of us savor the sweet taste of honey as we spoon it on a biscuit or into our tea, we’d prefer to keep the bees that make it at a distance. That’s not the case for PAM LATTER, beekeeper and owner of Lotus Haven Hives.

Latter has 37 bee colonies, from which she produces honey, creamed honey (which you can spread on bread like peanut butter), honey soap, and candles.

“Beekeeping is very rewarding,” Latter says. “I grew up on a farm, and beekeeping lets me get back to my roots.”

Latter’s interest in beekeeping started as mere curiosity. She did a Google search on honeybees and beekeeping, took a beginner beekeeping class with the Hampstead chapter of the North Carolina State Beekeepers’ Association, and started beekeeping with two hives.

A year later, Latter decided to turn beekeeping into a business. She grew her hives and began making and selling products. Latter also became a certified beekeeper, which verifies that she has the knowledge and skills to care for the bees, and a certified honey producer, which means she meets state standards and that her honey is pure.

“Once I commit to doing something, I’m all in,” says Latter.

About once a month, or more often when the bees are producing honey, Latter dons protective gear and visits the hives. She ensures the bees have enough to eat and that they are healthy. In the spring and summer, she also collects the honey. These visits aren’t without risk. Latter says getting stung goes with the territory. 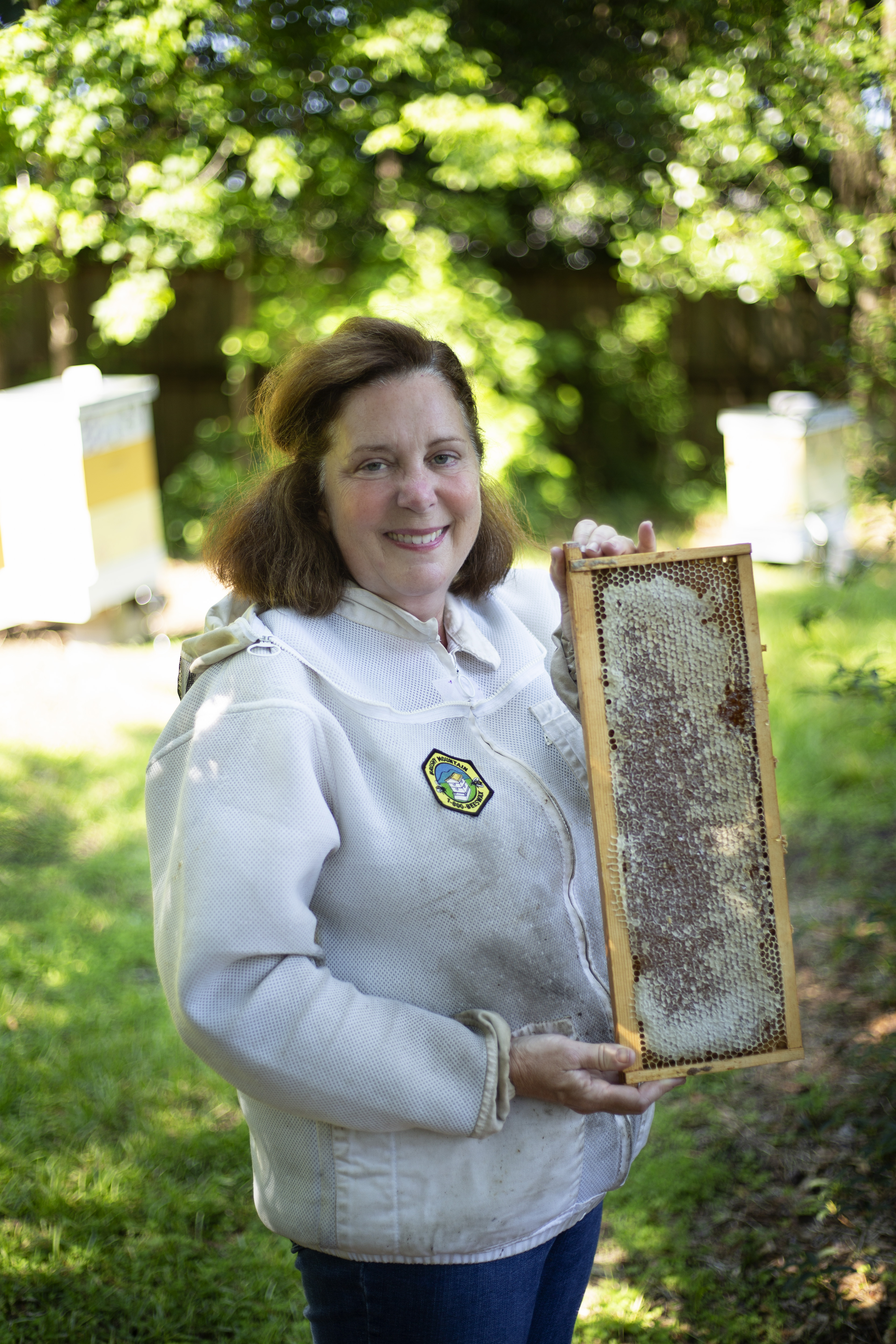 “I get stung all the time,” she says. “It doesn’t feel good and is usually because I’ve done something stupid.”

The time and the stings are worth it to Latter, who values the role the honeybee plays in our world. Of course, there are the wonders of honey, a golden drop of sweetness that can, if produced and consumed in the same locale, help reduce allergies, says Latter.

Honey, which is sterile, can also assist with wound healing. Honey soap, which has no lye, is a sought-after alternative to regular soap; and beeswax candles grace many a table or lend a soft glow to a room.

In addition, honeybees contribute to food production. They pollinate 20% of everything we eat, which translates to every five bites, Latter says. Almond, melon, cucumber, and other farmers hire beekeepers to bring their hives to their fields, so the bees can pollinate the plants.

Despite their good work, honeybees face a dangerous world. Their natural habitat is being overtaken by man; and pesticide use, including the mosquito sprays we use on our lawns, can decimate entire colonies. Honeybees are also preyed upon by the varroa mite, against which the honeybee has no defenses.

Latter’s commitment to the honeybee and beekeeping shows no sign of waning. In addition to serving as a beekeeper, Latter is the president of the Hampstead NCSBA, and as such helps new beekeepers and those who simply have an interest in honeybees learn more about them.

“My goal is to continue to keep my bees healthy, but more importantly to educate new beekeepers so they can keep bees and keep them alive, Latter says.

Latter sells her products at the Wilmington Farmers’ Market, or you can contact her at 910-200-5432.