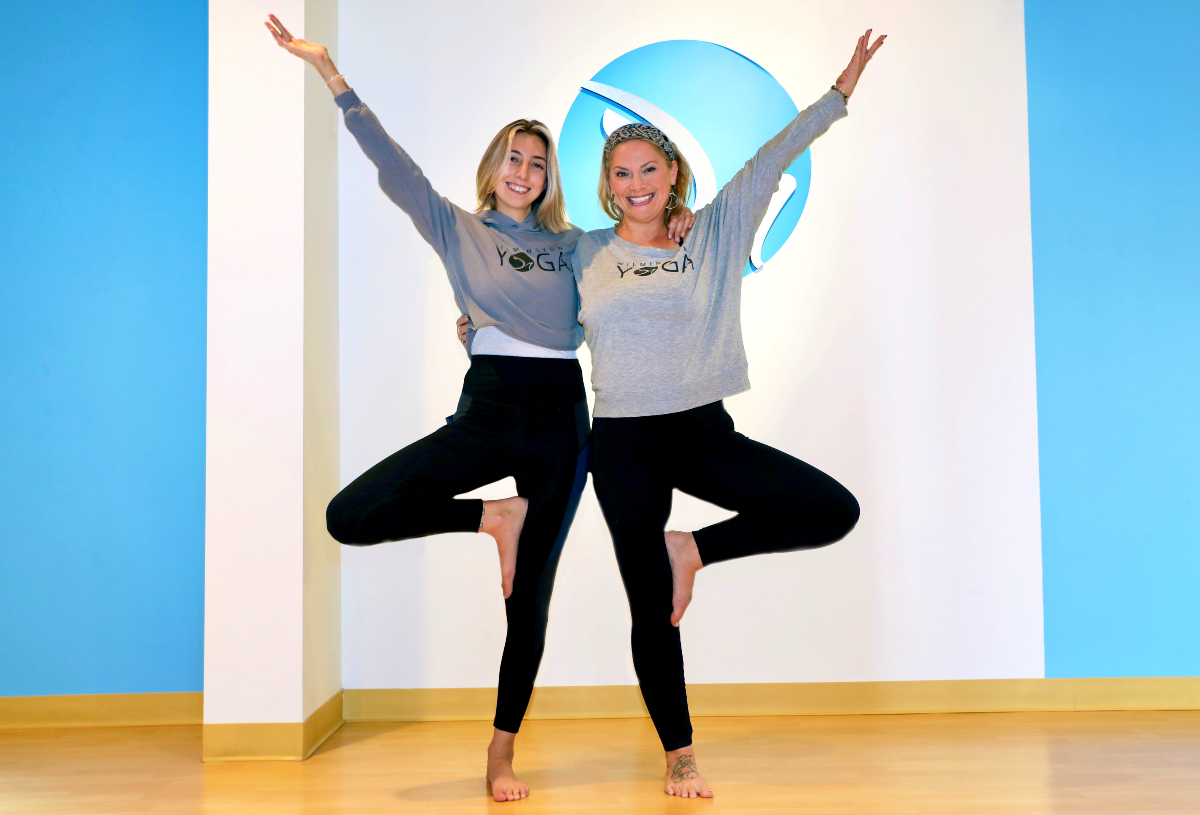 From stress management to connecting with self, yoga provides many benefits to people of all ages. It’s sometimes overlooked as a kid-friendly activity, but beyond the mat, it has numerous benefits for kids and teens. Wilmington Yoga Center has been hosting workshop series for kids ages 4-10 and tweens ages 11-16.

ERIN POWLEY (pictured left), who teaches the kids program, says yoga encourages their sense of play and imagination. This is especially important as they do this less and less as they progress through school.

“Class is less structured. I let the kids make up the class as we go,” she says. “We don’t realize it, but often children are already doing yoga by playing. For example, in class, I may ask, ‘What would a lion look like in a yoga pose? How would a lion move?’ And, what the kids come up with is a yoga pose that already exists.”

Powley also encourages kids to use their imagination during their practice. “I may say, ‘Envision you’re walking on the beach and a tunnel opens under the sand. You go through the sand and end up in a bubble under the sea. What do you see? Do you stay there?’ They may think this is an art exercise, but it’s guided meditation. And, I remind them, this is your safe space. You can go back there anytime.”

“As a school teacher, I noticed how nasty tweens, especially females, can be to each other. I saw an opportunity to build comradery through yoga,” she says. “They share the same experiences: awkwardness, isolation, feeling unpopular.”

Thompson says yoga teaches tweens that they have control of their own body. “Through breathing techniques and learning mindfulness, they have this toolbox with them all the time. And that gives them a better way to control their emotions, express themselves, and understand others,” she says.

Rules during class are simple. “You don’t have to do anything you don’t want to do, just don’t disturb others,” Powley says. “We remind them this is a safe space. If they don’t want to participate, they can sit on their mat and relax quietly. Giving them that choice is powerful. It’s not a typical rule for children, but most hear it and respect it.”

From class to class and series to series, Powley and Thompson can see the growth. “With continued practice, kids become more confident and understanding,” Thompson says. “The beauty of yoga is it’s truly for everybody,” she says. “Everyone can take what they need from it and leave the rest,” Powley adds.

The next yoga series starts in January.

Yoga for Kids! A playful, casual and very active class encouraging children to explore their creativity. Dynamic postures are presented in a simple step-by-step format. No experience is necessary, and this yoga class is offered to kids only, ages 4-10.

Yoga for Tweens! A playful, casual and very active class encouraging tween to explore their creativity. Dynamic postures are presented in a simple step-by-step format. No experience is necessary, and this yoga class is offered to tweens only, ages 11-16.