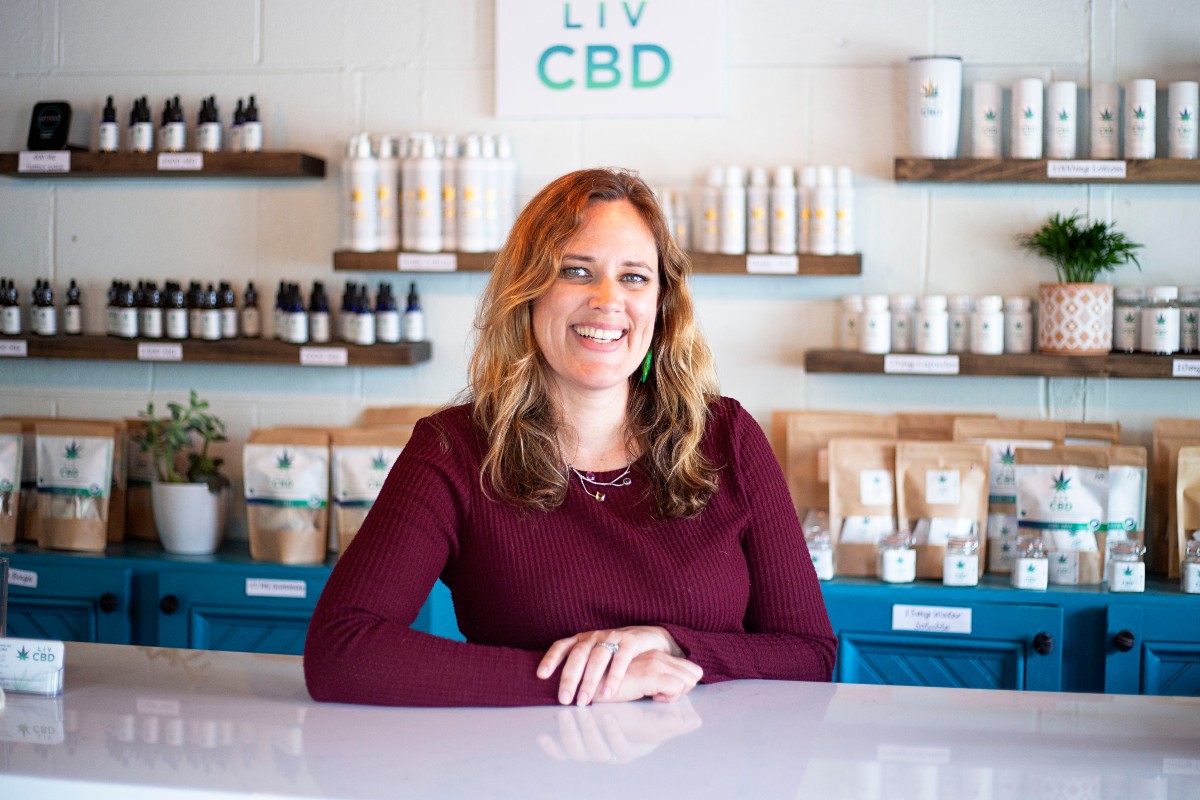 KIM SKIDMORE has found her happy place: LIV CBD, a newly restored cottage-like store on Castle Street where she sells CBD products for people and their pets. The cheery spot, with its patio and grassy back yard, makes her happy. And she says she has found her niche: helping customers relieve pain and stress through the application of CBD in various forms.

“This is what I want to do with my life,” she says.

As research and general acceptance of CBD has become more widespread, so have businesses specializing in products made from this member of the cannabis family. With the passage of the federal Farm Bill of 2018, which removed hemp from the federal government’s list of controlled substances, hemp-derived treatments have steadily gained in popularity.

Americans are using CBD in various forms to relieve a wide range of afflictions, from sleep difficulties to joint pain. And it’s not to be confused with medical (or recreational) marijuana.

“CBD can contain no more than three-tenths of one percent of THC. Any more than that and it’s medical or recreational marijuana,” says GINA CARUCCI, a chiropractor and functional medicine practitioner who opened a Your CBD Store franchise in Leland in March.

CBD, or more formally, cannabidiol, is derived directly from the hemp plant, a cousin of the marijuana plant. But the fact that it’s low in THC – the psychoactive agent in marijuana – means that CBD does not alter perception or behavior.

Both Skidmore and Carucci discovered the benefits of CBD as they sought relief from their own ailments.

“I had a lower back problem resulting from an injury when I was 16,” Skidmore says. “It wasn’t evident for some years, but I began noticing it when I became pregnant.”

The injury caused her back to go out with increasing frequency after the birth of her daughter. It interrupted her sleep. Encouraged by her husband, Skidmore tried ingesting a CBD tincture. But since the effects of that liquid are cumulative, it takes a while to feel the benefits. So she began applying a CBD lotion to her lower back.

“It was instant relief,” Skidmore says.

When COVID-19 restrictions were imposed, Skidmore was furloughed from her job. She spent much of 2020 learning all she could about CBD and decided she wanted to share her newfound knowledge and experience with others. As she formulated her business plan, she scouted possible locations.

“At first, my real estate agent had me looking in Leland, because there wasn’t a CBD store there at the time,” she says. “But then my agent told me about this location on Castle Street.”

Skidmore saw potential in the property, despite its poor condition. She and her husband, with help from her mother and their friends, cleared debris from the lot, painted the building inside and out, and secured retail fixtures – each a rescue from other rehab projects in the area. The team distributed flyers to individuals and businesses in the Castle Street business district.

Skidmore also received a certification by the CBD Training Academy.

Carucci, a new resident of North Carolina, enjoyed a 26-year-plus career in physical therapy and sports medicine in central Connecticut but suffered from the physical demands of her profession. Her work with patients took a toll on her hands, wrists, and elbows. As of a few years ago, she had tried a variety of holistic therapies but had not been able to heal, and she had slept badly for months.

“I gave myself a one-month sabbatical and came down to North Carolina, where I discovered a good-quality CBD,” Carucci says, explaining that she had previously tried other CBD products with no effect. “Within 20 minutes, I knew something was different.”

Still somewhat skeptical, Carucci stuck with regular application of topical CBD on her hands, wrists, and elbows. Within weeks, she saw an 80% improvement, so she added an oral CBD product, which gave her even more relief. Back in Connecticut, she continued her medical practice for another two years, and then COVID hit. She closed her practice in October of 2020 and moved to Southport in November.

“I saw there was opportunity here, found (Your CBD Store) and saw a business opportunity,” she says. “I still do telemedicine from here and have a small footprint in my store for chiropractic and functional medicine, seeing a few patients a week.”

But Carucci’s major focus is on educating the public on what new research is discovering about the benefits of CBD. She chose to buy a franchise of Your CBD Store because, she says, she values the company’s ongoing research and the quality of its products. She opened March 1 in a retail space on Olde Regent Way in Leland.

Skidmore and Carucci are not the only female CBD and hemp entrepreneurs in the area. For example, MELISSA BECKER, a registered nurse who launched Coastal Hemp Company on Market Street, sells both CBD products and hemp clothing items for people and pets.

The couple built on their families’ generations of experience in agriculture and their own interest in hemp to launch the business, which grows its own hemp and develops a variety of CBD products for a global market.

Skidmore surveys her sunny spot at the corner of Castle and Fourth streets, resurrected from a downward spiral of decay and neglect to become the home of LIV CBD – named after her four-year-old daughter. She plans to hold music events in the backyard a couple of times a month and has begun hosting yoga on the patio on Sundays.